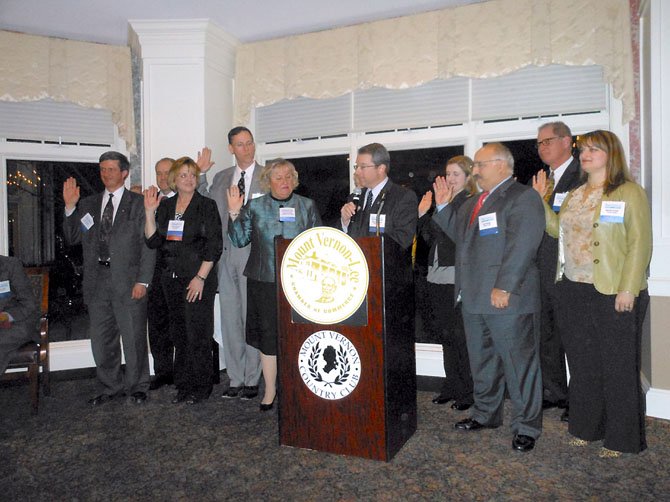 New The Mount Vernon-Lee Chamber of Commerce leadership for 2013 was sworn into office at the annual “Installation Extravaganza” Wednesday, Feb. 27 at Mount Vernon Country Club and Supervisor Jeff McKay mentioned three “extravaganzas” from the past week including the new transportation bill passed by the General Assembly, the release of the FY 2014 Fairfax County Budget, and Sequestration.

Outgoing Chairman Michael Gailliot, Hilltop Golf Club, was recognized as an exemplary leader in the chamber and the community and an advocate for turf fields at Mount Vernon high school and athletic opportunities for youth.

McKay said that there were more land use applications in Lee District during 2012 that in any other magisterial district in Fairfax County. “Ninety percent of the current office space is being developed in Lee District,” said McKay.

Fairfax County just received funding through the General Assembly to complete a final transit study for Richmond Highway which will be completed in 2014. This study will identify transit modes for the highway and identify a way to move forward to widening Route 1 from Woodlawn to Buckman Road.