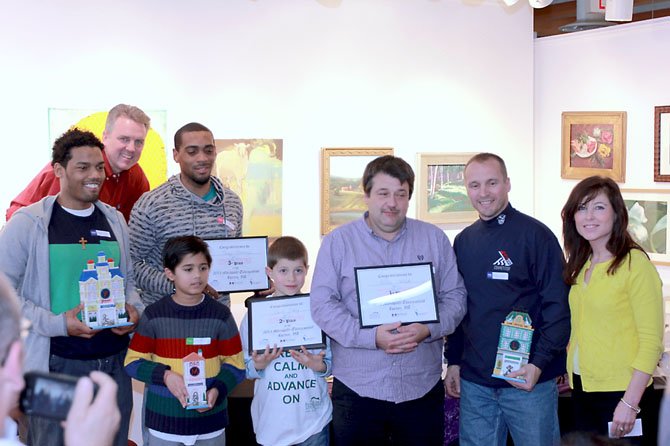 Although Allen Holder was placing bets with funny money and trading fictional real estate, the stakes were high for the sixth annual tournament at the Lorton Workhouse Arts Center on Feb. 23.

More than 100 participants played Monopoly at the Lorton Workhouse Arts Center during the sixth annual Monopoly tournament on Feb. 23.

Not only did Holder grab the top prize of $500 in real cash, but the tournament benefited the Lorton Community Action Center (LCAC), whose mission is to break the cycle of poverty and prevent homelessness. They help people with needs such as medications for those without insurance, food for hungry families and even diapers or new school clothes.

Sponsored by Re/Max Gateway Realtors Ron & Susan Associates, founders of the event, more than 100 Monopoly players of all ages had a blast in the three-round tournament. The top six players had the privilege of trading prime property on an ornate Franklin Mint Gold Edition Monopoly game board. After a tense 60-minute final round, Allen, who traveled from West Virginia for the tournament, emerged the victor.

“I’m very excited to have won,” Holder said. “This was my first time attending this tournament and it’s great to be the top prize winner. Knowing when to make the right trades and deals is the key and this year, it worked out for me.”

John Borrelli holds up a special Monopoly tournament t-shirt for the LCAC.

This competition is one of many tournaments held nationwide to assist organizations in raising funds for their causes.

“Ron and I are proud to host this annual event to raise money for a great cause and bring some fun into real estate by playing the classic game of Monopoly,” said Susan Borrelli, the event’s co-sponsor. “We were pleasantly surprised with this year’s turnout. We had 108 players and 20 local businesses participate, far exceeding last year’s turnout. We are definitely seeing this event grow bigger and better each year and are thrilled to be able to generate much-needed funds for LCAC.”

The Monopoly game, the world’s most popular board game, is licensed in more than 80 countries and printed in more than 26 languages. Since it first went on the market in 1935, over 200 million Monopoly games have been sold worldwide and it is now played by an estimated 250 million people.

The $25 registration fee per player included a continental breakfast and a raffle ticket for door prizes and lunch, compliments of Glory Days Grill in Lorton.

“We also sold table sponsorships for $250,” said Kowalski. “These were a great way to support a community charity and promote your business.

Kowalski, a veteran monopoly player, said the Workhouse Arts Center provided “a vibrant setting” for the tournament. Participants and attendees had the opportunity for a tour of the Workhouse and strolled through the studio buildings which are open until 7 p.m.