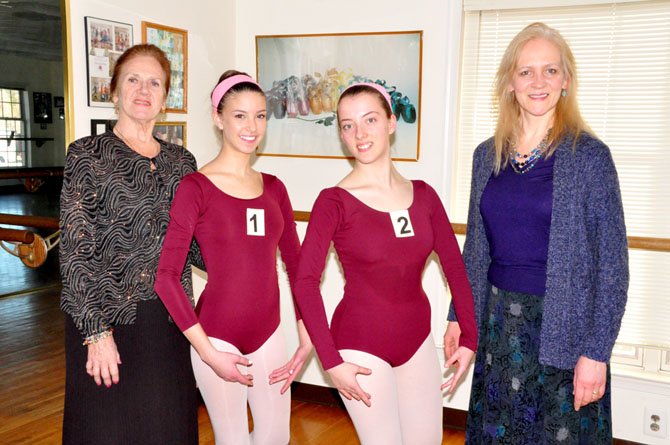 From left, Margaret Haddad, Amanda Baird, 15, Caroline Causey, 16, and Tamara Chetwerikova-Moubayed, an examiner for the Russian Ballet Society in England. Baird and Causey were among 60 students at Haddad’s ballet studio to be evaluated by Chetwerikova-Moubayed last week. Photo by Alex McVeigh.

Students at the Margaret Haddad Studio of Classical Ballet recently underwent testing for the Russian Ballet Society exams for the first time in two years, the only such exams that take place in the area. 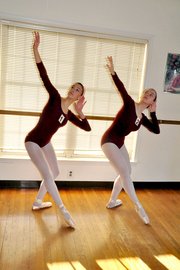 From left, Amanda Baird, 15, and Caroline Causey, 16, dancers at the Haddad Studio of Classical Ballet. The two were among 60 dancers at the studio that were examined by a member of the Russian Ballet Society last week.

“It’s a very intense process that lasts an hour and a half and takes concentration, physical strength and a lot of discipline,” said Haddad, who is in her 50th year of ballet instruction. “It’s impressive because these young ladies have a lot of other commitments in their lives, sports and other activities, while at many ballet schools around the world they would be practicing all day every day.”

Tamara Chetwerikova-Moubayed, an examiner for the Russian Ballet Society in England, visited Great Falls for the second time after administering exams two years ago.

“It was nice to see the progress of the dancers in the past few years, which I attribute to their teacher working hard to spur them along and inspire them,” she said. “The ability, dedication and discipline they’ve gained here is very apparent.”

Dancers as young as four up to several college graduates participated in the exams over four days last week.

“Almost every part of the preparation is stressful, but the feeling you get at the end is very rewarding.”

“Almost every part of the preparation is stressful, but the feeling you get at the end is very rewarding,” said Amanda Baird, 15. “Remembering all the combinations and having the stamina to perform them for an hour and a half is very draining.”

Caroline Causey, 16, said she believed the process helped her grow as a performer.

“As hard as it is to prepare, the challenge makes you a better dancer for sure,” she said .

Haddad said she was proud of the way her students approached the daunting task.

“Their pride was very apparent right away, as they all showed on time dressed perfectly and ready to work,” Haddad said. “This kind of process gives them a lot of confidence and pride in the work they do, and it fosters a healthy respect for the art form, as well as respect for each other.”

Normally the Russian Ballet Society exams are administered each year, but Haddad’s studio puts on two shows per year, and she said she felt an annual exam would leave too little time for learning techniques.

The Haddad Studio will hold their annual spring show Sunday, May 11, at the Madeira School. It is called “Down Memory Lane” and will contain selections from shows Haddad has overseen in her career, which spans three countries over five decades in the U.S., Lebanon and Kenya.