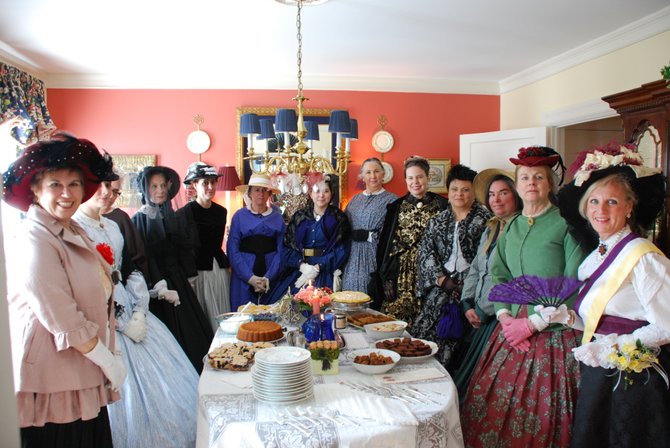 Amid a historically accurate buffet of fried cod balls, “Election Day” cake and biscuits and ham with zucchini relish, there stood a true culinary symbol of the afternoon: purple and pale gold-layered gelatin desserts served in stately glassware with a blackberry garnish.

“Purple for royalty, yellow for the light of God that’s within all of us,” spoke the elegantly appointed Suffragist Mrs. Robert Walker, “and the colors of the state of Kansas.” Home of the first referendum to fully enfranchise American women, the Suffragists readily adopted some of its symbolism to promote their cause.

And the Jell-O? The labor-intensive product was actually an upper-class treat around the turn of the 19th-century—a refreshment the real Walker may have offered her house guests.

To honor them, as well as Women’s History Month, today’s Walker (embodied by Lynne Garvey-Hodge, Fairfax County history commissioner and Progressive Era historian) chose to host a “Re-Enactress Tea” in her immaculately festooned 1880s-vintage Clifton home this past Sunday, March 10.

HAILING FROM AROUND VIRGINIA AND MARYLAND, the range of 14 exquisitely costumed re-enactresses represented a Powhatan princess (Rose Powhatan as Keziah Powhatan) through a modern era psychoanalyst (Karen Webber Gilat of Maryland as Frieda Fromm-Reichmann). They gathered—many meeting for the first time—to discuss their characters, their craft and enjoy a spot of historical tea.

Garvy-Hodge wasn’t quite sure what to expect from her first “mini retreat” of this kind. But, she said, “I’m delighted with the turnout. I’ve been wanting to do this for a long time.

“We all learned something from one another,” she added. “Like how many pairs of kids’ gloves Mary Todd Lincoln goes through shaking hands, and how to preserve drawers of petticoats and Civil War undergarments.”

THOUGH ELEGANT AND EVOCATIVE, there were some tactical problems presented by the unwieldy period-perfect attire. Most women had some difficulty maneuvering through the narrow 19th-century doorways and the warm, sunny threat of Virginia spring had those who came prepared cooling themselves with vintage fans.

“I should’ve stuck with Mrs. Coolidge,” lamented Phyllis Verhalen, as Mary Todd Lincoln. “Her garb is easier to drive a car in.”

Despite the sartorial disadvantages, the women enjoyed sharing their personal and character stories. “It’s a room full of passionate historians,” said Garvey-Hodge. “There’s a lot of devotion, and some even have true ancestors.”

One such woman was Karen S. Lyddane, a resident of New Baltimore, Va., and director of activities for The Woodlands Retirement Community in Fairfax. Lyddane is a descendant of her character, Clarrika Dale Fleming, who was a Civil War Union wife from West Virginia and had family members fight on both sides of the war. “I haven’t had any famous [inspiration],” she said, “but my ancestors have kept talking to me.”

Not all were as inherently connected with their characters. Cindy Bennett, a genealogist from Burke and member of the Burke Historical Society, has only been performing her Mrs. Silas Burke for about six months. “[The character Silas] needed a wife, and I was the only one who would put on a dress,” she deadpanned.

Fortunately for Bennett, that dress is a bit more manageable in a horseless carriage.