‘At Some Time, Everyone Needs a Helping Hand’
Votes

‘At Some Time, Everyone Needs a Helping Hand’

Wounded veteran talks about the value of serving others.

Two years ago, Marine veteran and Purple Heart recipient Justin Constantine shared his personal story with Mountain View High students. Severely injured during the War in Iraq, he had a long road to recovery and now helps other wounded veterans. 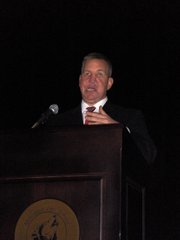 “I joined the Marines in 1997, when I was still in law school,” he said. “In 2006, I was single at the time and volunteered to go to Iraq. Six weeks after I got there, I was shot in the head. But I was fortunate to have made an amazing recovery, and I’ll spend the rest of my life thanking all the volunteer organizations who were there for me.”

Last Friday, March 1, the City of Fairfax native returned to Mountain View to address the students about the importance of volunteer work and community service. They then went through the local community doing several projects.

“If you give volunteer work a chance, you’re going to walk away a better person because of your participation,” said Constantine, now a lieutenant colonel. He told the students how, years ago, he’d worked at an animal shelter in Colorado and, later, donated blood several times in Virginia and California.

“After I was shot in Iraq, I needed several blood transfusions,” he said. “So I’ve also been on the receiving end and was able to say, ‘Thank you for saving my life.’”

DESCRIBING HIS VOLUNTEER EXPERIENCE, Constantine said he was even part of a team that cleaned a hoarder’s house in Alexandria. “It took a dozen of us all day,” he said. “We painted walls and cleaned the floors. I’ve also participated in clothes and food drives and done park-beautification efforts. And I currently mentor a fourth-grader with a tough life.”

He also helped out after Hurricane Sandy. “My wife and I drove to New York doing disaster relief,” he said. “The houses were completely destroyed by the wind and sand; it reminded me of what Iraq looked like six years ago.”

Constantine said it was “great knowing we’d helped people who couldn’t do it on their own. There’s something special about doing your little part and making the world a better place. And you’re not doing it for the recognition, but just to help someone else.”

He said students should volunteer from the goodness of their hearts and because it’s the right thing to do. “Don’t think of it as charity work,” said Constantine. “Think of it as an exchange because, at some time, everyone needs a helping hand. After I was shot, I needed others to help me. One day, you may be on the receiving end of someone else’s volunteer work. So you should go out and make a difference everywhere you can.”

“You may feel like you’re doing your civic duty or volunteering for academic credit,” he continued. “But when you decide to impact the community, you make a choice what effect it will have. You can paint graffiti on a building or clean it up.”

Constantine then gave the students five tips on being a successful volunteer:

CONSTANTINE TOLD THE STUDENTS that, when they’re ready to apply for jobs, a resume with volunteer work on it will help get their foot in the door. “You can capture the interest of an employer by showing you’ve helped others and care about your community and the people around you,” he said. “And now, with the financial situation, people really need to step up, more than ever, to help their communities.”

He noted that, in January, President Obama designated Martin Luther King Day as a National Day of Service. “But each one of us can contribute and do the right thing, all year long,” said Constantine. “Anyone can serve; you don’t have to have a college degree to do it.”

Standing before the students last week, he was a living testimonial to the fact that, no matter what hand is dealt to someone, he or she can still do their best to help themselves and others.

After being shot, Constantine got married, remained in the Marine Reserves and started a foundation to help other wounded warriors. Today, he’s a motivational speaker who speaks to a wide variety of audiences about how courage, a positive attitude and teamwork can help people overcome adversity and obstacles in their lives.

“Your challenge is to be great and to serve,” he told the students. “It’ll make a difference in your life.”