“I’ve been to the Oktoberfest here, the Wine Festival, concerts in the Pavilion, and I don’t think I’ve ever seen a crowd like this one.” That was Roy Mackey of Reston’s impressions of the throngs that filled the closed-to-cars Market Street in the Reston Town Center on Sunday, March 17. 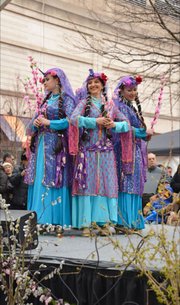 Given the date, you would be forgiven if you suspected that the event was a St. Patrick’s Day celebration, but one look at tents filled with fine hand-made rugs, crafts, the tantalizing smells of kabobs on the grill, and the lines of folks willing to wait for a taste of Ash-e Reshteh soup, and you would quickly realize that an entirely different part of the world was on display here. This was the Nowruz Festival, held for the second time in Reston, and organized by Iran E. Ma. Shohreh Asemi, a well-known Iranian-American actress, journalist and TV producer and the host and founder of the Nowruz Festival Organization.

Just prior to Nowruz, Persian households decorate a ceremonial table, called the cloth of seven dishes—Haft Sin. This table was presented by artist-designer Hedi Aghevli.

Listening to the sounds of the Persian, Turkish, Kurdish and other languages spoken in Iran, mingling with English, French, Spanish (and was that Dutch we heard?) along the Reston streets, it would seem that the festival brought together an international melting pot of people to enjoy the sights and sounds of the day.

Simin Babri and Mahrokh Keshavarci charm the crowds at the Nowruz Festival with their traditional tribal Qashghai dances.

The Pavilion served as the presentation hub throughout the event, with a variety of singers, musicians, dancers and storytellers entertaining an actively engaged crowd. While the actual festival of Nowruz lasts for several days, this local celebration packed all these performances, representations of traditional characters, and upwards of 75 booths offering the customary foods, goods and products into an 11 a.m. to 5 p.m. time slot. Market Street took on the atmosphere of a traditional Middle Eastern Bazaar. Festival founder Asemi says that last year’s event was the most successful of all time at the Reston Town Center. With more vendors and more entertainment, this year’s Nowruz celebration looks to take the top spot.