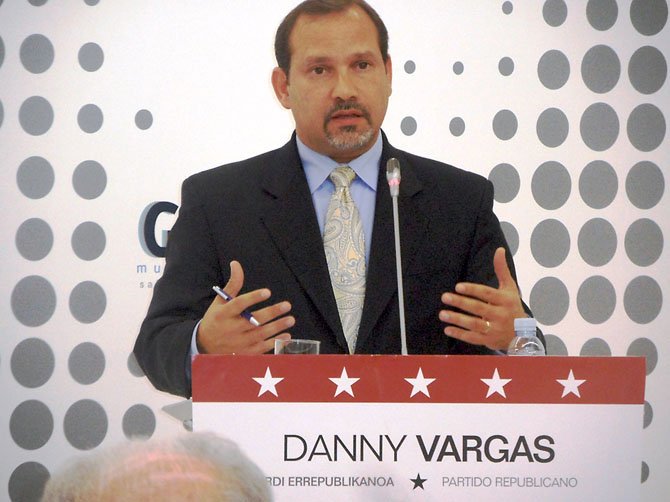 Danny Vargas, CEO and founder of VARcom solutions, during a 2012 mock debate in Spain. Photo courtesy of VARcom Solutions

In anticipation of the original “fiscal cliff” deadline at the end of 2012, apprehensive business owners had begun taking preemptive measures, such as tightening budgets, and implementing hiring and pay freezes.

“Small and large companies are taking more conservative approaches to hiring, and government contractors, a large segment of the Fairfax County economy, could see their contracts reduced or terminated,” said Sharon Bulova (D-at-large), chairman of the Board of Supervisors.

But what has rattled Fairfax County businesses is not specific cuts in the sequester, but the uncertainty of what the cuts will be and when they will take effect.

“From the perspective of business community, businesses are adept when they understand what’s coming. They see a problem; they solve it. The uncertainty is driving them crazy.”

“One of the most impactful effects of sequestration thus far has been the uncertainty that is preventing growth in the local economy, “ Bulova said.

Supervisor John Cook (R-Braddock), who is a founding partner of the Fairfax law firm Cook Craig & Francuzenko, said his practice and Fairfax County are hurt by the uncertainty factor.

“The biggest problem in Fairfax County is not the sequester, per se, it’s the uncertainty. If this continues, that’s huge,” Cook said. “Businesses can deal with bad news. They can adjust to declining revenues, increased costs, what have you … but not knowing what will happen is crippling. Congress and the president can’t do their job, and you and I are going to be paying for this for a long time.”

“From the perspective of business community, businesses are adept when they understand what’s coming. They see a problem; they solve it,” said Jerry Gordon, president of the Fairfax County Economic Development Authority (FCEDA), “The uncertainty is driving them crazy. Prime contractors, such as SAIC and Northrop Grumman, they can translate their skill sets to non-federal applications. My fear is for the sub-contractors and the sub-sub-contractors, where a single contract can make or break a business.”

The Good News and the Bad News…

While every state stands to lose, Northern Virginia’s close ties to Washington and the federal spigot have the region squarely in the crosshairs of the sequester.

“With nearly 40 percent of our region’s economy tied to the Federal Government, Northern Virginia will be especially hard hit,” said Congressman James Moran (D-8) in a recent letter to constituents.

While only 1 percent of Fairfax County’s General Fund revenues come from the Federal Government, the human services system in Fairfax County receives 20 percent of its revenue base from federal funding. In 2011, Fairfax procured more than $26 billion in federal contracts.

The region’s strength is also its “Achilles heel,” Fuller said and warned the area “faces a sea change” as federal spending decreases.

According to economic forecasters, the outlook is grim and grimmer. Most of the fiscal apocalypse, they say, is related to government-worker furloughs, which could begin as early as next week. In addition to eroding consumer confidence, the furloughs could trigger a domino effect that impacts everyone.

“If the feds are furloughed two days a week, no more housing purchases, no more dinners out, everyone hunkers downs, consumer housing starts to slow down and things come to a grinding halt and everyone is affected,” Gordon said.

Some economists take the worst-case scenario further. If the sequester lingers, they predict airport-security lines will get longer because TSA agents will work one fewer day every two weeks; fewer commercial planes will fly because of furloughs to air-traffic controllers; prisons will be locked down because Bureau of Prisons staff will be sent home; terrorists may go undetected because fewer FBI agents and counterterrorism analysts will be working.

While Fairfax County has its weak points, Gordon said the county is still entering the sequester from “a position of strength.

“Our unemployment is only 3.6 percent, far lower than the national average of 7.7 percent,” Gordon said. “We’ve been working toward a diversified economic base for more than 20 years. We are a center of information technology, software development, telecommunications, aerospace and the Internet. Our workforce is highly skilled. We have an outstanding public school system. … All this has factored into the development of an economy based on technology and professional services. Yes, I think we’re going to take hits, but we’re in a better position than in most communities.”