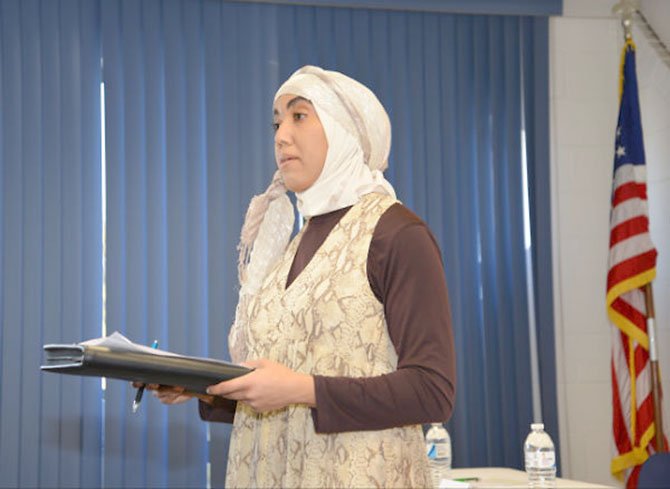 Event organizer Hajjar Ahmed put together a panel of Muslim women from the sciences, technology, engineering and math fields for a National Women’s History Month presentation, encouraging the next generation to study in those disciplines. Photo by Andrea Worker.

The session was not originally on the association’s calendar. “My daughter suggested that the association sponsor a positive program during March, National Women’s History Month, about Muslim women as a way of encouraging the next generation of women to enter STEM careers. She came up with the idea in response to what we saw as a negative meeting that we had read about. Hajjar pretty much put this together in less than a month,” said Mr. Ahmed.

He was referring to the February meeting of the Republican Women of Clifton. The topic to be discussed by guest speaker Stephanie Reis was “the treatment of women in Islamic Society” and how she believes that the hijab (head scarf often worn by Muslim women) “is a catalyst for Islamic terrorism.”

“Some local Muslim men and women attended the talk,” said Mr. Ahmed, “hoping to correct any misimpressions that the speakers might bring up. But my daughter didn’t want to attend a negative event. She wanted to showcase Muslim women who have succeeded in difficult, male-dominated fields, and done so peacefully in the United States of America.”

Mr. Ahmed welcomed the assembly with a brief explanation of who the Nubian people are, describing the descendents of an ancient civilization, located between northern Sudan and southern Egypt, speaking a unique non-Arabic language, as “a peaceful people.” As to the purpose of the day’s event, “It’s important to encourage all people to explore the sciences,” he said, “for the continued growth and welfare of our country. In the last 10 years there has been a 32 percent increase in jobs that require STEM backgrounds, but the numbers of students enrolling in STEM fields had decreased during that same time period.”

THE SMALL MEETING ROOM was filled to capacity with teenagers and their families as six women, all wearing hijab, took to the speakers’ panel table. Their titles, printed boldly beneath each of their names, were an impressive variety of engineering specialties, from civil to aerospace engineering, from forest genetics to IT security.

After an introduction by Hajjar Ahmed, the women spoke for about 20 minutes each, with tales from their childhoods, speaking of how they became interested in STEM areas, providing highlights from their academic and professional careers, and offering advice on how to pursue a path in the sciences, math and technology. Some of the women were born in the United States of immigrant parents. Amani Eisa, a civil engineer who graduated from George Mason University, came to this country in 2001 with no English skills. “Maybe not the best timing, giving the tragedy of that year, but whatever is happening around you, you keep working and going forward.”

Sumara Baig came to America from Pakistan at 12 years of age. Her parents wanted her to be educated, and that was not an option for girls past the sixth grade where she came from. The Oakton High School graduate stressed how important it was to be able to communicate well in English, no matter what you study. Today, Baig works in air traffic control technology for Lockheed.

The particulars of their stories may have differed, but there were many similarities as well. The speakers, who ranged in age from 60s to 20s, all recounted having been one of few females in their majors classes, like Herndon High School graduate Hazima Javaid who was one of six girls in a class of 150 studying aerospace engineering at Virginia Tech. They were in the minority in the internships that they completed, the competitions they entered, and often in their workplaces, even today. All have experienced gender bias, often further complicated by their wearing of the hijab.

Regardless of the difficulties for women, they urged their audience to persevere, if their passion really lies in STEM fields. One after another, their advice was repeated: “Take the challenging classes, stretch yourself;” “Keep busy and intellectually active during the summer and breaks. Go after those internships early;” “Read. Read everything you can and learn to communicate;” “Seek out mentors and listen and learn;” “Be true to yourself. And if your faith guides you, then be true there, too. How you wear the hijab says a lot about your faith and your belief, even in yourself.”

A FORMAL QUESTION AND ANSWER period followed the presentation. The speakers stayed beyond the program to answer additional questions and to personally show their own mentoring spirit. Members of the Nubian Benevolence Association, headquartered in Falls Church, were also present and available for questions and comments. The Nubian Benevolence Association can be contacted at nbawashington@gmail.com.