Nicole Rosen’s 16-minute “Toy Soldier” will show at the GI Film Festival in May. 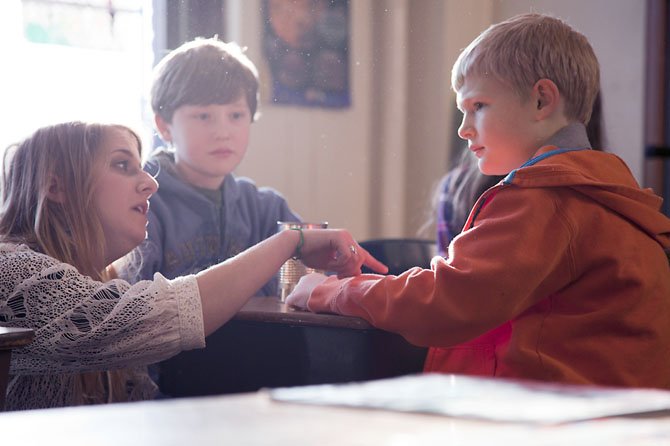 Director Nicole Rosen with Chris Brodbeck as Sam Gold and Theo Van Golen as his friend Mason. “I had to explain to him where his father went. I do a lot of situational directing,” said Rosen. Photo contributed by Mike Arrison 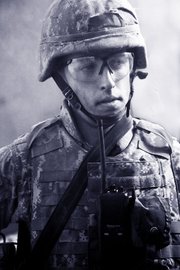 When Nicole Rosen sets out to make a film, she doesn’t shy away from sensitive subject matter—she pursues it.

Two actors and a crew member test lighting while filming “Toy Soldier” on location in Gloucester City, N.J. Many crew members were current Drexel students at the time, working on up to three additional films, on top of classes.

One of her first projects in high school was called “Life Chronicles.” “Basically I shot people who were dying, suffering from terminal diseases,” Rosen said. “They wanted to film their lives for their families. I think it really hit something—my first really intense experience in filmmaking.” 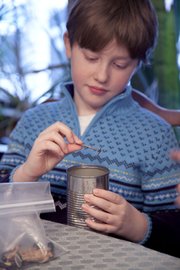 Child actor Chris Brodbeck as Sam Gold, playing with his special soldier. “Mentally he had to prepare himself in a very mature manner,” said Rosen. “He was so professional, so mature. I am so blessed.”

As a student at W.T. Woodson High School, Rosen had an opportunity to take courses through the Fairfax Academy for Communications & the Arts and was empowered by both top notch film production equipment and instruction. After graduating in 2008, she attended Drexel University—inspired to pursue filmmaking.

Rosen’s senior thesis project at Drexel, a short film called “Toy Soldier,” has already taken first place at the Endless Mountain Festival and Roslyn Film Festival in Pennsylvania, and is nominated for the GI Film Festival set to take place in Washington, D.C., May 6-12.

“TOY SOLDIER” CENTERS around a young, modern-day military family and was shot on location in Philadelphia and Doylestown, Pa., and Gloucester City, N.J. A series of emotional moments unfolds not only from the battlefield, but from the perspective of the family waiting at home for a deployed soldier.

The choice of war as a subject was an easy, yet profound one for the young director.

“I wanted to affect people universally,” admitted Rosen, who graduated from Drexel in May 2012 and now works as a production assistant and talent coordinator in Los Angeles. “I wanted to impact a larger audience and focus in on a current event. War is every day. Someone is out there fighting—it’s not like it goes away. Everyone identifies with it, you know someone who knows someone ...”

Within the military film genre, she saw an opportunity to contribute her vision.

“When I see films or shorts,” said Rosen, “they don’t focus so much on the families. I really wanted a different aspect of it. Instead of focusing on the war, the fighting, I wanted to take a step back, do it through the eyes of a family, a young boy. A son and father have this unexplainable bond.” 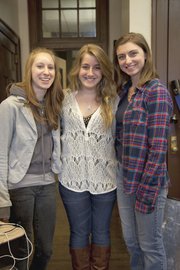 Brodbeck’s character Sam is an 8-year-old boy whose father has just been deployed to Iraq for his final tour. Sam connects with his father’s set of vintage toy soldiers deeply and imaginatively, which opens up a new way of looking at the war—and his father’s career—for him. “I wanted this kid’s fantasy mirroring the idea of something bigger,” said Rosen.

“What would be in his fantasy world?” she continued. “Cars? Dinosaurs? That’s when the idea of war and military started coming. How would it be if he was playing with soldiers? If they didn’t just come from his father, but his father’s father ... special? It just started branching off from there.”

NINE MONTHS of prodigious pre-production work by Rosen and her co-producers Jess Herbine and Emily Marcouiller (fellow 2012 Drexel graduates) included dozens of script drafts flying back and forth with the project’s screenwriter Nicole Marchesani, a marketing campaign and fundraising that ultimately brought in $5,500.

Herbine and Marcouiller were able to reach out to individual donors through the crowd-sourcing website platform Indiegogo, and also benefited from a number of university grants including Drexel’s Entertainment & Arts Management Majors Funding Undergraduates for New Development (EAM F.U.N.D.).

But the donations that truly propelled the six days of filming were those of the Drexel Army ROTC program. To impart authenticity, the veteran staff loaned Rosen and company genuine body armor and plastic weapons, guided the cast in battle formations on set and even gave notes. “They proofread the accuracy on my script,” said Rosen, “saying, ‘Don’t worry, this is good, this is right. This would happen, this wouldn’t.’”

“I KNEW THE PERIPHERAL, but when I zoomed in, there’s just so much to learn,” she continued. Working with soldiers, including SFC Terris Kolmorgan (Rosen’s “right-hand man and main military advisor on set”), who had been stationed in Iraq, “I got closer to them in a way, I knew more than just the outside: I knew their personal lives, their take on it. Everyone was so open with me.

“I’m so thankful, because I feel like I know, I have a greater understanding of what they go through.”

“Toy Soldier” first screened on campus at Drexel in June 2012 for the ladies’ senior thesis show. “It made me feel like people understood my goal in making this,” recalled Rosen. “I looked over and people were wiping tears, my mom was bawling. It was one of those moments where I thought: Wow, we did it.”

Rosen is the first to admit that reaction isn’t her motive: “I promise I don’t want people to cry, but I want to get the issues out there. You’ll go through an array of emotions as you watch it. You live with my film, see the good in things.”

And possibly come away with a different perspective and a sense of innocence.

The GI Film Festival takes place May 6-12 at various locations around Washington, D.C., and Virginia. For more information, visit www.gifilmfestival.com.