From Herndon to Sierra Leone
Votes

From Herndon to Sierra Leone 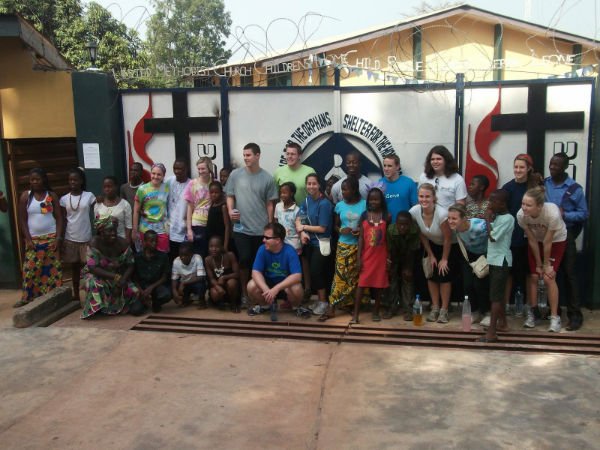 Students from a previous service trip pose for the cameras with some of their new friends at the Child Rescue Centre in Bo, Sierra Leone. Floris United Methodist Church, with Senior Pastor Tom Berlin at the helm, will lead a local group of young adults on the next service mission from May 26 through June 9.

Emily Lopynski started her Pen Pal relationship with Afiju, a boy of about the same age from the Child Rescue Centre in Bo, Sierra Leone, when she was in the third grade. Lopynski, a Herndon resident, just finished her freshman year at William and Mary College. She and Afiju are still in touch. In fact, their communication over the years has grown. “It was so wonderful when he got access to Facebook,” Lopynski said. “We could really keep up with each other and have a real conversation.” A vast improvement, considering that for most of the time since the two first “met,” their friendship relied on the exchange of letters that sometimes took as long as five months from the writing of one to the reading by the other.

On May 26, there will be yet another upgrade in the communications between Emily and Afiju. Instead of letters or data traversing the distance that separates them, Emily will join the sixth Sierra Leone Student Service Team trip, organized and lead by Floris United Methodist Church (FUMC), and travel the 4,553 miles that will take her to a face-to-face meeting with her friend. For two weeks Lopynski will join a team of 12, living and working in the compound that includes the Child Rescue Centre, a school, and the 26-bed Mercy Hospital. Together with the centre staff, local volunteers, and the leadership of their group, the students will take on construction and repair projects, spend time teaching and playing with the children at the centre, learning more about the culture, and of course, making new friends and finally meeting old ones.

HOW DID ALL THIS come to pass? How did a girl from Herndon and a boy from Sierra Leone ever connect, stay connected, and then have the opportunity to meet? Because this friendship grew from another—that of FUMC’s Senior Pastor Tom Berlin, with now Bishop of Sierra Leone, Reverend John Yambasu. Berlin and Yambasu both attended Candler School of Theology at Emory University in Atlanta and Yambusa had hosted Berlin on a trip to Sierra Leone. In 1999, when the country was still firmly in the grip of a bloody civil war that often “employed” children in the armed forces, Pastor Berlin received a desperate phone call from Yambusa. “Tom! There are rebels in the front yard! Please help me get my wife out to safety,” Yambusa pleaded. Berlin and others immediately went into action and Yambusa and his family made it safely to a refugee camp.

Yambusa came to the United States later that year to thank those who had responded to his call for assistance, and to garner support for the children orphaned by the war and left to fend for themselves on the streets. Floris United Methodist again rose to the occasion, becoming the first official sponsor of Yambusa’s efforts. “Our fundraising even took us by surprise,” marvelled Pastor Berlin. “It was Christmas of 1999. We set a goal of $25,000. With a congregation of about 500 people, we thought that was doable. Well, we raised 50,000, I think, in that first week. We kept changing the goal on the poster thermometer, until we just erased the cap.” By the end of January, FUMC’s generous parishioners had raised more than $125,000 that became the seed money for the construction of the Child Rescue Centre, ultimately taking hundreds of children off the streets, many of them former “soldiers.”

“The goal is to educate these kids and help them transition back into family life,” explained Pastor Berlin. The residents live at the centre for between one and three years. Then they are usually welcomed into a local foster family. The centre continues to support them and they attend the school, receive healthcare and support for continuing education. Berlin said that the centre and related programs are all aimed at encouraging the graduates to stay “in-country” and not become part of the brain drain. “So many of professionals, trades and crafts persons and business people fled the country during the war and often still seek to emigrate to a country not continuously on the United Nation’s list of least developed and most poverty stricken in the world,” he added.

FUMC is now part of a larger collaborative of Methodist Churches that support the centre and the hospital. The churches, mostly from Virginia but also from as far away as Texas, raise funds for items like treated mosquito netting for the anti-malaria campaign. Mercy Hospital-trained personnel then travel around the country delivering the simple, but life-saving materials, and help insure that they are used and used properly. “One in five kids in Sierra Leone will not live past the age of five. Many of them will die from malaria, and that just doesn’t need to be the case,” declared Berlin. “We’re talking about a 40 percent decrease in malaria deaths since the mosquito nets have been put into use among a larger portion of the population,” said Berlin.

BERLIN AND OTHER ADULTS from FUMC and other churches have made numerous working trips to the centre in Bo over the years. But how did the student trips come to be? “This is a long-term partnership,” said Berlin. “The people of Sierra Leone will need our help for many years if they are to climb out of the desperate poverty that they have been left in. The next generation, and the next, and maybe even the next, will need to answer the call. Our young adults get the chance to see first hand how much these people need us, and they get the chance to serve and see for themselves how much good one person can do in this world.” The students raise their own travel money—about $3,000 for the airfare and other travel expenses—and are then housed and cared for during their service mission. They attend several training and orientation sessions to ensure success for all. “And we keep close contacts with both our government and the local authorities to monitor the situation on the ground for safety,” Berlin added. He did note that despite crushing poverty, personal crime in Sierra Leone is actually quite low. “Pick pockets and purse snatchers, particularly in the capital, can be an issue,“ he stated, “but in areas like Bo, not so much. And our students all stay on the campus and we have plenty of supervision.”

Emily Lopynski isn’t worried about anything like that. “I have two friends at school from Sierra Leone and they are so excited that I am going to their country. They keep telling me I will love it—and that the people of Sierra Leone will love me! They say their countrymen are just friendly and really like Americans,” she said. “I can’t wait to get there and get to work—and to meet Afiju!”

The Child Rescue Centre and Mercy Hospital are now part of the Helping Children Worldwide non-profit organization, head-quartered in Herndon. Visit them at www.helpingchildrenworldwide.org to read more about this effort that has been so generously embraced by the members of Floris United Methodist Church, and that has inspired so many young adults to make a journey into the unknown just to lend a hand.