The Fairfax County Park Authority has started the master planning process for Baron Cameron Park, a 60-acre park at the northwest corner of the intersection of Wiehle Avenue and Baron Cameron Avenue.

The park currently features nine rectangular fields, one lighted diamond field, a picnic area, playground, 32 community garden plots and an off-leash dog area. It also includes 430 parking spaces, many of which are used as a park and ride for commuters. 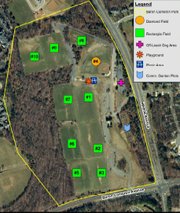 The schools transferred the park to the Board of Supervisors in 2006, who subsequently transferred ownership to the Park Authority in 2011.

“This park is not a Reston park. It’s a district park that serves people in the communities of Reston, Herndon, Vienna, Great Falls and other surrounding areas,” said Bill Bouie, Park Authority board chair and a member of the RCC’s governing board. “The field conditions there are fair, and I’m being nice. They have diminished over the years as a result of us not making an investment into it. The reason the park authority hasn’t made an investment up to this point is because we did not own it until two years ago. Now that we own the land, we must consider future investments to this park so that it better serves Reston and the surrounding communities.”

Jay Rauschenbach, project manager for the Park Authority, said the revision will look at ways to increase field capacities such as synthetic turf, as well as ways to improve the non-field facilities such as the picnic area, playground, off-leash dog area and community garden plots.

At the heart of the current master plan revision is the Reston Community Center’s interest in adding an indoor recreation facility. The RCC Board of Governors recently sent a letter of interest to the Park Authority about a possible partnership for a facility that would provide aquatic, gymnasium and other fitness facilities.

The RCC is currently undergoing a separate process than the Park Authority when it comes to planning the proposed facility.

“Our process is parallel to this park planning process, and from our perspective, what we’re looking at is how to fulfill the priorities in our current strategic plan. Our current strategic plan identifies two facility priorities, an indoor recreational facility with aquatics features and a performing arts venue,” said Leila Gordon, executive director of the RCC. “We are looking at Baron Cameron Park because it is an opportunity for us to do something that brings other resources to the table other than RCC Small District 5 dollars and cents. It represents a contribution from Fairfax County taxpayers in the nature of the land contribution.”

Gordon said the combination of the current low cost of debt as well as construction at this time is a major appeal for the RCC, especially since she said it is a “very big priority” to maintain the Small District Five tax rate at its current level.

Consultants Brailsford and Dunlavey, who authored the original feasibility report for the RCC on such a facility in 2009, will present their updated feasibility and financial analysis to the RCC board and the public June 3, and the RCC board is scheduled to make their decision about pursuing expansion June 17.

“We’ll also consider and analyze the request from the RCC should it be formalized next month,” said Sandy Stallman, park planning manager for the Park Authority. “Once the RCC board has delivered its consultants information to the Park Authority, we’ll be able to evaluate it to see if the facility is right for Baron Cameron Park and the community.”

Many people at a public meeting May 7 at Buzz Aldrin Elementary School were concerned about a potential conflict of interest regarding Bouie’s involvement in the process. He currently serves as chairman and Hunter Mill representative on the Park Authority board, as well as on the RCC Board of Governors.

Bouie, who was appointed to the Park Authority board nine years ago, and is on his fifth term on the RCC board, said he has not made any decision about the proposed facility.

“From the RCC side, we have two strategic initiatives, a need for indoor recreation facility aquatics based, and performing arts facility. The Park Authority board has a number of needs, some funded, that extend out to 2021,” he said. “I’ve been as forthright as I can, I’ve spent time with a number of people one-on-one and spoken to groups, and I’ll still continue to do that as needed. I’ve got nothing to hide.”

Many nearby residents were concerned about putting up a facility with Small Tax District Five funds in a district park, not a Reston park.

“The purpose of Baron Cameron Park is not to have something that ought to be in an urban area. There’s lots of urban areas in Reston, lots of it that could be developed for this use. There’s no need to put such a facility in the middle of the largest, nicest park in Reston,” said David Okerson, who lives near the park, on the other side of Wiehle Avenue. “It’s also somewhat dubious use of money from this community to find a facility that will be primarily used by non-Reston residents.”

OTHER RESIDENTS, including several with swimming backgrounds, said such a facility is much needed. Michelle Moyer, who moved to Reston 25 years ago and has served on the board of the Reston Community Swim Team Association, said a facility like the one proposed is a long time coming.

“The original RCC center opened in 1979. The 1980 census population was 35,662. As of the last census, we’ve increased conservatively, more than 64 percent,” she said. “I fear that these facilities and amenities have not kept pace with our growth. I strongly support a multi-faceted indoor facility with access for all.”

The Park Authority will develop their master plan draft revision, including public comment, over the summer, and present the draft plan during a public meeting in the fall, with more public input solicited for 30 days after that meeting and a possible Park Authority board action in early 2014.

Reston residents and businesses can share comments about the proposed Baron Cameron Facility by e-mailing, RCCContact@fairfaxcounty.gov with their name, address and comments.

Members of the public who wish to comment on the Baron Cameron Master planning process as a whole can contact Rauschenbach at: