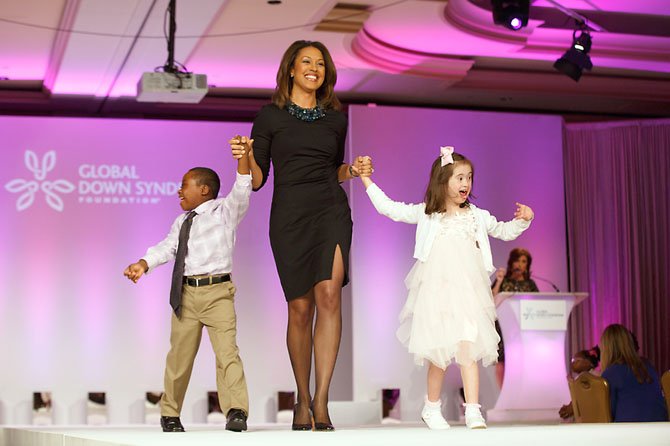 Julia Anne Greene, 8, a second grader at Waynewood Elementary in Alexandria, shared the runway with Jeremiah Perry of Greenbelt, Md., during the Global Down Syndrome Foundation’s “Be Beautiful Be Yourself Gala” at the Ritz Carlton in D.C. on May 8. Julia and Jeremiah were accompanied by WUSA anchor Lesli Foster. She loves playing dress up, laughing, playing kick ball, riding her bike and recently starred in the “Cat-in-the-Hat” school production.

Twenty-five models with Down syndrome rocked the runway at the Global Down Syndrome Foundation “Be Beautiful, Be Yourself” Gala on Wednesday, May 8, at the Ritz Carlton in D.C.

The fashion show and fundraiser is designed to raise awareness about Down syndrome, one of the most frequent chromosomal conditions affecting an estimated 400,000 Americans.

More than 350 people attended the event, which raised more than $400,000 for the foundation.

The event featured a performance by nine-time Grammy-winner Sheryl Crow, and appearances by Kyra Phillips of CNN, who emceed the gala and John Roberts of Fox News.

According to Michelle Sie Whitten, executive director of the Global Down Syndrome Foundation, the condition is the least funded genetic condition by the National Institutes of Health (NIH), securing just 0.07 percent of NIH’s 2012 $31 billion budget.

Global is focused on working with NIH, raising funds and educating the public and leaders about the discrepancy in research funding for the condition, as well as the abilities and achievements of those with Down syndrome.