Ride of the Patriots
Votes

Ride of the Patriots

It's time for the annual Ride of the Patriots, a Memorial Day tradition in the City of Fairfax. 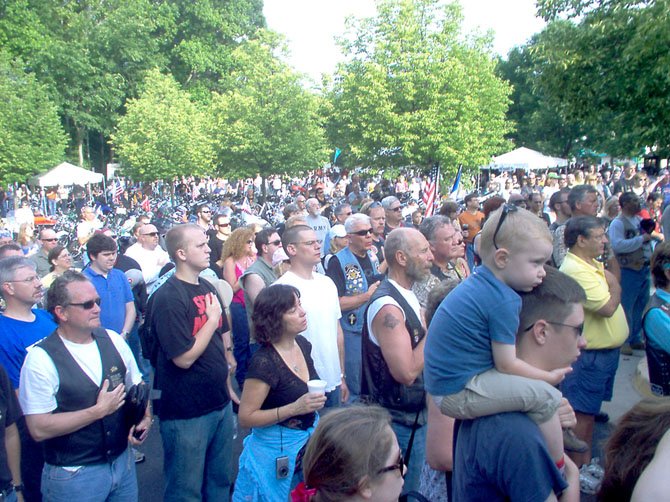 Each year the crowd of participants and supporters grows at the annual Ride of the Patriots event, held in the parking lot of Patriot Harley-Davidson in the City of Fairfax. Photo by Amber Healy. 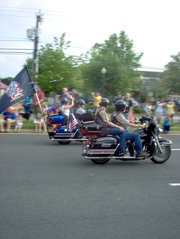 The first few riders embark on the annual Ride of the Patriots trek to the Pentagon, where they meet the larger, national Rolling Thunder tribute to service men and women, past and present.

Odds are, residents of the City of Fairfax will hear them before they can see them.

Each year, more than 4,000 motorcyclists descend on the city, gathering at Patriot Harley Davidson from across the country, coming together to share stories, compare notes from the road and honor those who have served the country.

The Ride of the Patriots is celebrating its 15th year as the local contingent joining the half-million strong Rolling Thunder tribute to veterans. What started in honor of soldiers and other servicemen who had been taken prisoner of war during Vietnam or went missing in action has become a trip to recognize and say thanks to veterans of all conflicts and to remember those who have passed away.

"Every year it gets a little bigger," said Ken Lyons, a member of the Harley Owners Group who organizes and hosts the ride and who has been involved with the ride nearly since the beginning. "The City of Fairfax has taken to putting up bleachers" to accommodate the residents who come out and line Fairfax Boulevard from the dealership to Nutley Street, many waving flags or other patriotic items. 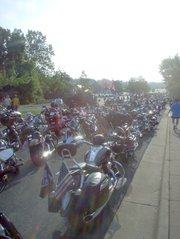 A line of motorcycles stretched at least a mile along Fairfax Boulevard during the annual Ride of the Patriots Sunday, May 29, 2011, in the City of Fairfax.

IT WASN'T LIKE THAT in 1998, the first year of the ride. At that time, the group was smaller, more like 50 or so motorcycles from across the region, recalled Larry Larson, another HOG member and one of the original riders from that time.

"In my mind, it's more and more important" for the bikers and the residents to get together each year for their Memorial Day tradition, Larson said.

"As we see WWII veterans fading from our midst, it seems like Memorial Day events are disappearing," he said. The Ride of the Patriots won't be part of that trend, however, and continues to grow both in popularity and participants.

Not all the riders are veterans—Lyons served a few years in the Army Corps of Engineers, Larson did not serve in the military—but each year the event, which begins with a ceremony in the Harley dealership parking lot, features a speaker, usually someone recently retired from service.

This year is no different. The guest speaker is Lt. General Duane Thiessen (Ret.), a former commander of the U.S. Marine Corps Forces, Pacific, who will address the thousands gathered in the lot before leading the parade to I-66 to join the national Rolling Thunder rally at the Pentagon. The bikes gathered there usually number close to half a million, and the rally, celebrating its 26th year, will proceed from the Pentagon into Washington, D.C., starting at noon. 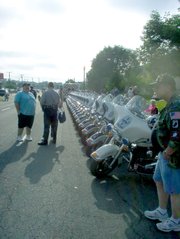 The motorcycles of the Fairfax County Police Department were lined up along Fairfax Boulevard, waiting to lead the way during the annual Ride of the Patriots Parade Sunday morning, May 29, 2011.

Of course, despite the patriotism that overwhelms the parking lot, despite the brightly decorated children, grown-ups, motorcycles and even dogs decked out in red, white and blue to honor veterans and those still serving, it's possible not everyone appreciates the roar of thousands of motorcycles, especially at 6 a.m. on a Sunday, which is when the first motorcycles arrive to line Fairfax Boulevard.

THAT'S FINE, Lyons said. It's not for everyone.

"If you want to protest, that's fine, but we're honoring the people who put their life on the line so you can gripe," he said.

Larson agreed, adding that motorcyclists still have the outdated and, by and large, undeserved label of being outlaws, drifters and troublemakers.

"This is a patriotic event made up not of the 1 percent, but of the 100 percent, the bikers and the local community," he said.

"For all the people on Rifle Ridge who complained about the dealership when it was being built, who think we're just Hells' Angels, I don't think they've been to the event. They haven't seen what it's about."

It's a day to bring together the living to honor those who served and didn't make it home, and to thank those who did, they said.

The 15th annual Ride of the Patriots will take place beginning at 8 a.m. on Sunday, May 26, at Patriot Harley Davidson, 9739 Fairfax Blvd., Fairfax. Motorcycles will begin lining up on Fairfax Boulevard early in the morning and will depart Fairfax, via Nutley Street, to I-66 east to the Pentagon, starting at 9 a.m. For more information on the event, go to www.rideofthepatriots.com.