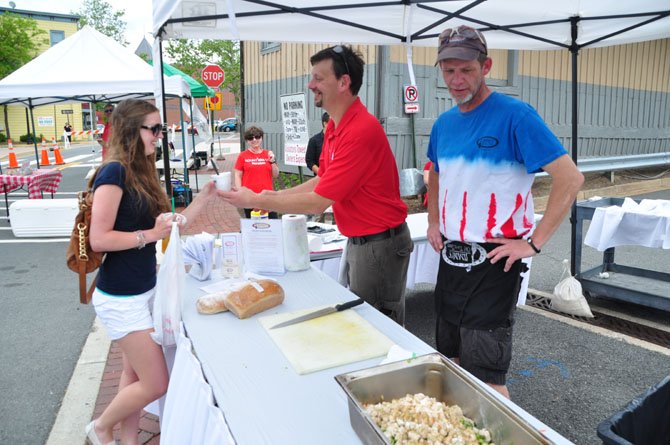 From right, Eric Quarnstrom and Jimmy Cirrito of Jimmy’s Old Town Tavern hand out a sample of Jimmy’s Chicken Stew to Lindsey Jones at the Herndon Farmer’s Market Thursday, May 16. Photo by Alex McVeigh.

Herndon — The Herndon Farmers Market has returned for the season, in a new location and with new extended hours designed to make shopping for fresh produce and other goods easier. Located on Station Street between Elden Street and Lynn Street, the market features more than a dozen vendors, as well as cooking demonstrations, live entertainment and more.

Jimmy’s Old Town Tavern kicked off the cooking demonstrations Thursday, May 16, with owner Jimmy Cirrito and Eric Quarnstrom making batches of chicken stew throughout the day.

There will be several kinds of live entertainment during the summer at the Herndon Farmers Market. On June 13, guitarist Jim Toye will perform a variety of classic rock hits. On July 11, guitarist Al Robertson will play rock, blues and jazz. Starting July 11, there will be family fun days featuring a wide selection of acts.

July 11—Paul Hadfield: The Funny Guy, comedy and magic that amazes and delights all ages.

Aug. 1—Jake the Magician, comedy and magic for all ages.

Aug. 29—Grandsons Jr., an upbeat mix of Americana music for children and parents.

“It’s the soup my grandmother makes,” Cirrito said to customers as he handed out samples. “Or at least she will when I send her the recipe.”

The demonstrations will feature ingredients that can be found at the market. The chicken for Jimmy’s stew came from just a few feet away, from B and D Poultry. A new vendor this year, they are based out of Markham, Va. They currently offer chicken, with turkey, geese and duck to come, as well as a variety of different eggs.

“We come from a 35-acre farm in the Blue Ridge foothills,” said Jesse Kopach, of B and D. “We’re well known here for the different eggs we sell, turkey, duck, quail and goose eggs, as well as chicken. The taste isn’t hugely different, some have a bolder flavor, especially. Some of our customers swear by duck eggs when they’re cooking.”

Sweet Thang Bakery, based in Fredericksburg, offers a variety of dessert treats. They start baking every Wednesday at 4 p.m., so items at the Herndon Farmers Market are less than 24-hours old.

“We have cupcakes, muffins, cookies, which people always enjoy. Later we’ll have brownies and some other items,” said Matthias Smith of Sweet Thang Bakery. “The salted caramel cupcake has been one of our most popular items so far.”

The first few weeks have featured a selection of greens, spring onions, radishes and more, with tomatoes, apples and berries coming later in the summer. Currently there are also plants for sale, including flowers, fresh herbs, tomatoes and more.

“Over the past few years, if I wanted to get to the market, I’d have to try and steal away from work on an early lunch, which wasn’t always possible. More often than not, I’d get there as the market was closing down, and I ended up just going to Reston or somewhere else later in the week,” said Bill Wynn, who works in Herndon.“Since they’re open until 12:30 this year, I’ve been able to make it every week, and it’s a market I like supporting.”

This year’s market will also feature live concerts on June 13 and July 11, as well as family-friendly live entertainment from July 11 to Aug. 29.

The Herndon Farmers Market will take place every Thursday through October.