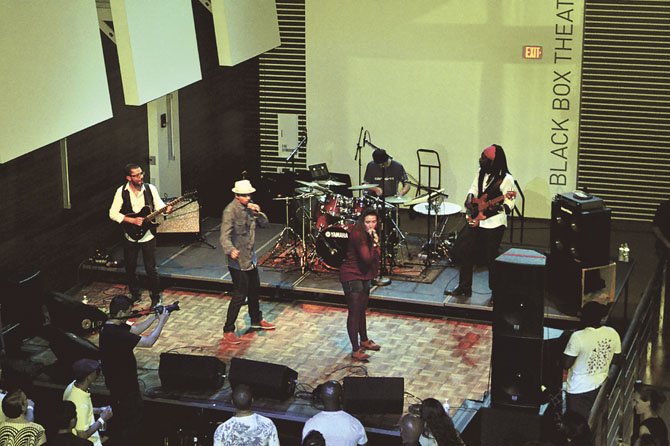 Backpack Jax performs at the Artisphere. Photo by Ross Sylvestri

Last Thursday, People gathered at the Artisphere on Thursday, May 16, to attend another event of the second annual Urban Corps hip-hop festival that was taking place in Washington from May 12-18. The event featured performances by French dance crew KLP and the France-based Iraqi-Cuban/American singing duo Backpack Jax that performs a style of music that has been described as “urban jazz.” The festival was sponsored by Urban Artistry and the Washington chapter of Alliance Francaise.

Jennifer Pietropaoli, a communications associate with Alliance Francaise, said there were several reasons as to why the Artisphere was chosen for this event: “We love collaborating with Artisphere and have a great respect for them as a cultural venue for their ability to welcome such a variety of artists, performance styles, exhibits, etc… For this particular event, Artisphere is the perfect space: It’s open, it has great views for something like dance cyphers thanks to the balconies. Plus, there is a stage, but the artists can easily become part of the crowd and vice versa; it gives everyone the chance to mingle and interact before, during and after the show.”