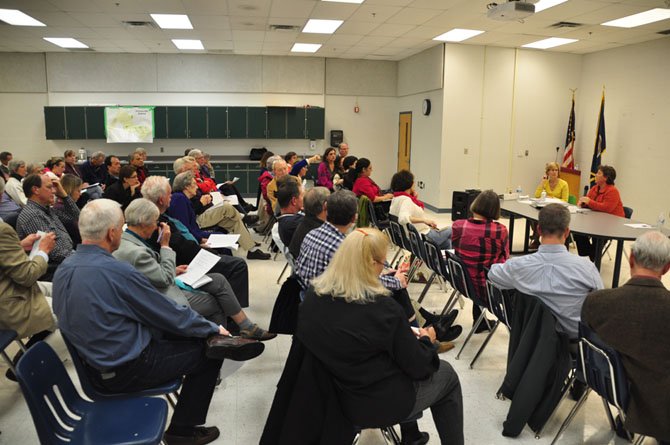 A residential studio has been defined by the county as a building or portion of a building of three to 75 units per lot. They are limited to rental only.

THE STUDIOS can be no more than 500 square feet per unit, and each unit must include an in-studio kitchen and bathroom. The land must have direct access to a collector street or major thoroughfare, and there must be at least one parking space per unit provided.

Additional standards include: one washer and dryer per 10 units, if one is not within each unit and a resident manager, on-site manager or Board of Supervisors-approved off-site management.

The plan must also conform to “character, building size, height, intensity, use and scale” of any other development on the site and the surrounding neighborhood.

The maximum capacity of the unit is three people, which includes up to two children.

“The amendment addresses a number of the board of supervisors’ affordable housing initiatives going back a decade or more,” said Donna Pesto, of the county’s Department of Planning and Zoning. “It is not intended to meet all the affordable housing initiatives of the county, because they are just zero bedroom efficiency units, and all rentals, not everyone wants to live there. This is intended for a segment of the population.”

According to Pesto, less than two percent of rental units in the county are efficiencies.

“We don’t have entire buildings of efficiency units, we have people who are over housed, people who have to pay too much for housing in a one or two-bedroom because that’s all that has been built in Fairfax County for ages,” she said. “The statistics are there, but the development community is not voluntarily building them because there’s not a lot of bucks to be made, so that’s the reason why we’re doing this.”

Almost everyone who commented at the Oct. 30 meeting said they were opposed to the proposal, with concerns ranging from decreased neighborhood safety around any such units to enforcement should too many tenants live in a unit.

“I think this is asking for problems any which way you look at it. I think you’re going to see developers trying to squeeze these types of units on a lot of properties where it won’t fit, and there’s no restriction on what kind of zoned residential property they can go on,” said Samuel Feller of McLean. “I know Ms. Pesto stressed that they must meet with the surrounding specification, but I feel like this amendment put in writing opens the way for things to slip through the cracks, and it’s the neighbors that will have to deal with it.”

Others felt that such residences would lower value of adjacent properties, as well as negatively affect quality of life of current residents.

“She wouldn’t call them projects, but I have a feeling that’s what these types of units would turn into, especially if it becomes a large building with nothing but these units,” said Ester Browning of McLean. “I feel like the fact that an exception can be had on any property zoned any kind of residential completely throws away the reason we have different kinds of residential districts.”

SUPERVISOR JOHN FOUST (D-Dranesville) said he doesn’t think the scope of the plan is appropriate for many residential districts.

“Personally, I think this is a good product in the right zoning category, but I don’t think it’s the right product for low-density residential,” he said. “In my opinion, most of the board members feel that way. I don’t think it would pass if it came in the way it’s been presented.”

The Fairfax County Planning Commission has a committee that will hold four workshops where the public can comment on the plan. The next meeting will be Wednesday, Nov. 20 at 7 p.m. at the Herrity Building, 12055 Government Center Parkway, Fairfax, in Conference Room 106 and 107.

More information can be found at www.fairfaxcounty.gov/planning/rsu/rsu.htm.