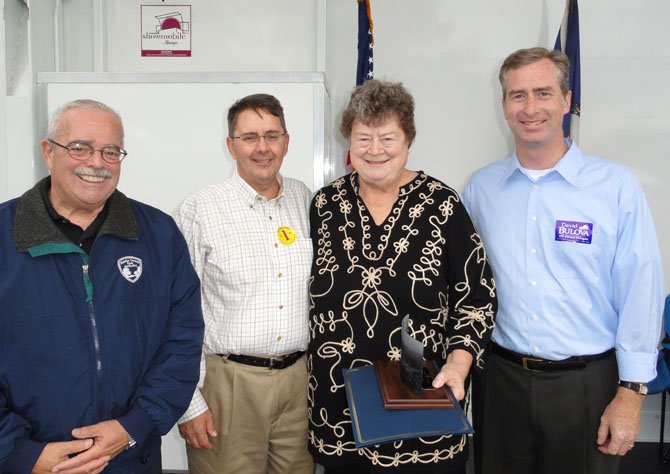 A Centreville resident since 1973 and someone who’s made a difference in the lives of others, Trudy Harsh was honored Saturday as the 2013 Centreville Day Citizen of the Year.

She was selected by the Centreville Day Planning Committee for her work creating and leading the Brain Foundation, a nonprofit dedicated to providing housing for adults suffering from brain illnesses and vulnerable to becoming homeless without community support. 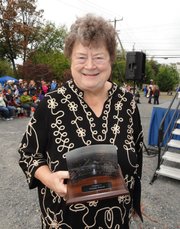 Harsh’s husband Joe died in 2010; but he, too, left his mark on the community. A history professor at George Mason University for 30 years, he became a respected authority on the Civil War and wrote three books about it dealing with strategy and Gen. Robert E. Lee.

Their three children attended London Towne Elementary when it was one of Centreville’s two schools. And Trudy shopped for groceries at Giant — then at the Routes 28/29 intersection — when it was the town’s only supermarket and she knew more than half of the customers.

Laura was 8 when a brain tumor and subsequent surgery stunted her physically and emotionally. The experience of raising and advocating for her made Trudy Harsh acutely aware of the needs of the mentally ill — especially in housing.

In Laura’s honor, in 2003, she established the Brain Foundation. Through loans, grants and donations, it raises funds to provide suitable housing for people afflicted with persistent brain disease or injury, but able to live on their own, with minimal help.

Using her knowledge as a Realtor, Harsh established “Laura’s Houses.” And in November 2006, with funding from the Virginia Housing Development Authority, the Brain Foundation brought its first house in the City of Fairfax.

It now has seven townhouses — three in the City of Fairfax and four in Fairfax County — with four tenants each. And because these residents don’t have cars, the homes are all near transportation and within walking distance of a grocery store.

“We provide the houses, furnish them, pay the utilities and do the maintenance,” said Harsh. “Our tenants are chosen by Pathway Houses — the largest nonprofit servicing the mentally ill in Fairfax County — and the Fairfax/Falls Church Community Services Board.”

Those two entities also provide tenant services such as counseling and transportation. In addition, Pathway’s social workers make sure the residents take their medication and see that they get jobs and some recreational activity.

The Brain Foundation has a volunteer citizen board of 15 people and receives state grants plus Community Development Block Grants from the federal government. But, said Harsh, “We still have to make up the difference with donations from the general public.”

With some 500 mentally ill — or, as Harsh describes them, “brain-diseased” — people on Fairfax County’s waiting list for housing, the need is still critical. So Harsh and her organization are continually scrambling for funds to purchase more homes and help keep the existing ones up and running.

Monetary contributions are also needed so the group may continue doing its work. Tax-deductible donations may be sent to the Brain Foundation, P.O. Box 231227, Centreville, VA 20120. For more information about the organization or to donate online, go to www.brain-foundation.org.

Residents may live in the homes as long as they want; they pay 30 percent of their monthly income for rent. And Harsh knows how valuable a service these houses offer. “They provide housing for people who are homeless or living with elderly parents worried about what will happen to their children when they get older,” she said. “So otherwise, these people wouldn’t have a place to live.”

At the Oct. 19 Centreville Day celebration, Supervisor Michael R. Frey (R-Sully) presented Harsh with a plaque adorned with a photo of old Centreville. She also received a certificate “in recognition of years of outstanding service to the Fairfax community by working to improve the lives of individuals struggling with the challenges of brain injury and mental illness.”

Because of “Laura’s Houses,” said Centreville Day Chairman Cheryl Repetti, “Adults with mental challenges may live and work with independence and dignity. The Centreville Day Planning Committee and the Friends of Historic Centreville are proud to recognize Trudy Harsh as one of Centreville’s hometown heroes.”

“I was thrilled to get this award,” said Harsh afterward. “I’ve enjoyed living here since 1973 and plan to live here the rest of my life. This is a great honor, and I hope it will help bring more awareness to the Brain Foundation and the great need of people suffering from brain diseases.”