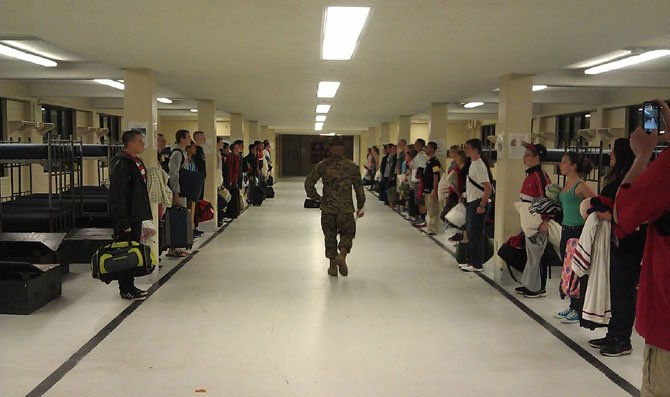 Herndon — Members of the Herndon High School Naval Junior ROTC got a chance to train in the same place as members of the Marine Corps for 48 hours, experiencing life at boot camp firsthand. 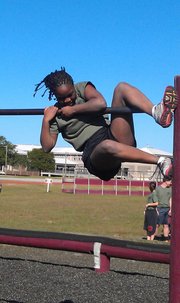 A member of the Herndon High School Naval Junior ROTC attempts an obstacle during a session at Parris Island.

“They allow groups to go down to Parris Island, [S.C.] and train on a regular basis, with drill sergeants giving them the full routine,” said Herndon JROTC Commander Richard Cassara. “I think they knew we could get it a little tougher as a JROTC group, and they sure let the students have it, from the moment we stepped off the bus, to the moment we left.”

Marine Corps Recruit Depot Parris Island is where any Marine west of the Mississippi River attends boot camp. It has housed Marines since 1891, and currently more than 16,000 Marines pass through per year.

Herndon students got an earful from three different drill instructors during their time there, as well as 5 a.m. wakeups, a visit to the gas chamber, an obstacle course, a challenge course and a trip to the Marine Corps Museum.

“In every TV show and movie about the Marines, what your hear about Parris Island is their drill instructors, so we were definitely interested in seeing what it looked like,” said senior Charlotte Suttle, the unit’s executive officer.

Forty one cadets, about half of the corps, attended Parris Island. For group’s commanding officer, senior Sean Sullivan, it was a chance to get a glimpse of what is to come.

“I’m planning on joining the Marine Corps after graduation, so I was glad to get a taste of what I’ll be in for,” he said. “We had it a little softer than regular recruits, there are a few obstacle courses that we couldn’t go on, but I expected a fast paced weekend with a DI yelling in your face, and that’s what I got.”

The volume from the drill instructor was at first not what the cadets expected.

“One of the DIs we had was having a voice issue, so he couldn’t yell too much, but the ones we ran across on the rappelling tower did not have the same problem, so we got it there,” Suttle said.

Sullivan recalled that moment when he, and his fellow cadets would realize they caught an instructor’s attention.

Herndon High School Naval JROTC students line up for a morning formation while at Parris Island.

“There’s that sudden moment when they see you and lock eyes, and all of a sudden they’re right in your face, yelling and trying to intimidate you,” he said. “It didn’t bother me too much, because it’s not personal, it’s their jobs. They just have no patience for mistakes or incompetence, because there’s not room for it.”

The cadets also stayed in the barracks on the base, though due to impending bed inspections the next mornings, it wasn’t always a comfortable way to sleep.

“Most of the girls didn’t sleep under the covers, especially the first night, because we didn’t want to mess up the bed for morning inspection, because it takes a long time to get it ready,” Suttle said.

She will be joining the Navy reserves after graduation, and enjoyed getting a glimpse of military life.

“I think I’m a little more confident, because I know what to expect a little bit at boot camp,” she said. “It definitely reinforced my decision to join.”

Sullivan said he learned about the realities of the military as opposed to what’s seen on TV and the movies.

“I think I expected it to be more chaotic, in the movies it’s always a little crazy, but in real life it’s nothing but order,” he said. “I wish I could have stayed down there, but I had to get back to school. But it’s definitely a positive message about how you can overcome things that are tough.”