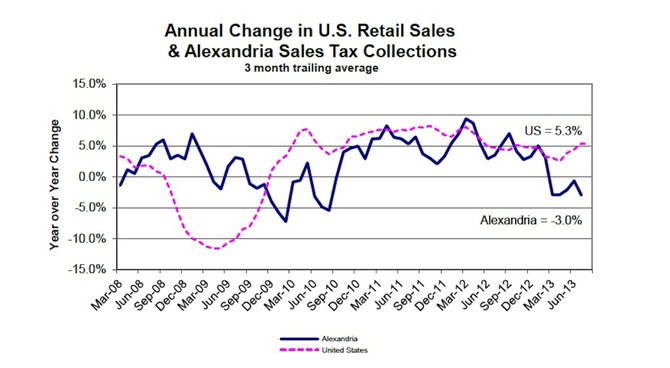 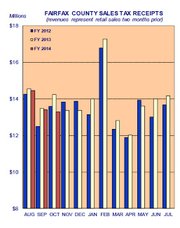 Sales tax revenues are down across Northern Virginia, leading to concerns that balancing the books for the coming fiscal year could be even more of a challenge for budget officials and elected officials in the coming months. The decline ranges from 5.3 percent in Alexandria to 8.5 percent in Arlington for the month of October, when local governments collect taxes from transactions that happened in August. Regional analysts say the numbers reflect the influence of the sequester, which means that next month's financial report will show the damage of the partial government shutdown.

"The federal government has a bigger impact on Virginia than any of the 50 states," said Frank Shafroth, director of the Center for State and Local Government Leadership. "And that means people here are making decisions about what they are going to buy without knowing when or if they are going to get paid."

For local governments trying to put together budgets for fiscal year 2015, the numbers pose a serious challenge. Should they revise their revenue estimates for the future, which would indicate a belief of similar uncertainty in the future? Or should they revise the revenue estimates in the current fiscal year because sales tax revenues are expected to take another dip when the December collections of August revenues take a dive related to the shutdown.

"The expectation was that September would be positive but sales were negative," said Steve Fuller, director of the Center for Regional Analysis at George Mason University. "The explanation was the threat of the shutdown and the concerns among consumers about the debt ceiling battle. Consumer confidence dropped in September and again in October."

IN FAIRFAX COUNTY, sales tax revenues were down 6.6 percent in October, which reflected collections that took place in August. County officials received $13.3 million, which was significantly smaller than October 2012. It's the third consecutive month that sales taxes were down, although not as dramatically. August numbers showed a 0.7 percent decline compared to 2012, and the September economic reports logged a 0.5 percent decline compared to last year. Overall, sales tax receipts are down 2.6 percent for the first three months of fiscal year 2014.

"We are definitely looking at the budget implications," said Albena Assenova, budget analyst with the Fairfax County government. "But we have not revised our estimates yet."

Fairfax County officials, who oversee the largest budget in Virginia, expected the summer months to be bad because of furloughs related to the sequester. By the end of the year, budget officials will have a better idea of how much the shutdown hurt the sales tax revenue. In the meantime, they have already started reviewing what kind of revenue estimates they want to make next year for fiscal year 2015.

"We are definitely monitoring our receipts," said Assenova. "And we might need to revise our estimates downward."

ARLINGTON COUNTY has experienced sales tax revenues decline 8.5 percent in October, which reflects collections from August. Arlington officials collected about $3 million, which was significantly lower than October 2012. Budget officials say a number of factors could be behind the dip, including a particularly strong October 2012 that would be difficult to top.

"What we are seeing is more variability," said Arlington Budget Director Richard Stephenson. " In the past, we might have had 10 months of positive month-over-month growth from the prior fiscal year. Now we're seeing more variation, where it might be six months up and six months down."

"It's a contributing factor to the gap between revenue and expenses that we are forecasting for fiscal year 2015," said Stephenson. "Commercial real estate and BRAC are affecting the region as well."

ALEXANDRIA SALES TAX revenues are down 5.3 percent compared to last year. The most recent monthly financial report shows this is the lowest drop in sales tax collections in three years. Compared to the national average of sales tax collections, which is up about 5 percent, Alexandria and other Northern Virginia jurisdictions are taking a hit.

"It's something that we are monitoring very closely," said Laura Triggs, director of finance for the city of Alexandria. "We think one of the contributing factors might be grocery store closings."

”The federal government continues to fail at the most basic of functions, including most recently failing at just the simple act of remaining open," said Gov. Robert McDonnell in a written statement. “This is having a direct impact on the finances of Virginia’s residents and our state government."