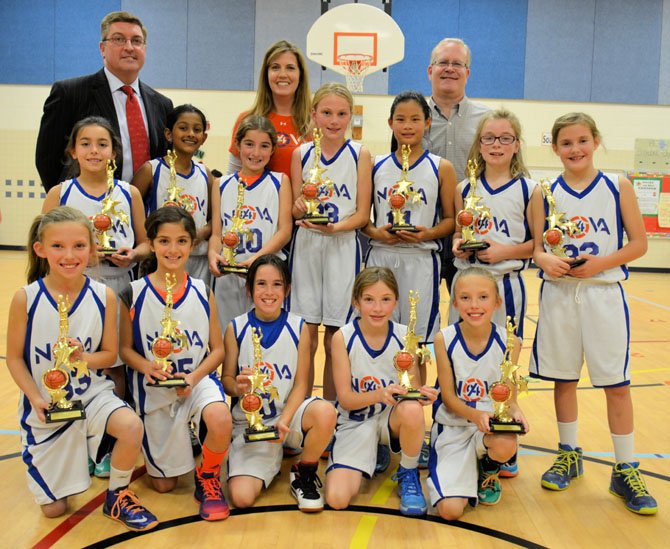 This was the NOVA 94 Feet (aka Gladiators) girls team third season playing in the Little Legends 3rd/4th grade boys league and they were excited to be in the championship game. Coach Shumadine registered the girls in the league in 2012 when she couldn’t find any other options for the 3rd grade girls who wanted to play basketball in the off-season. Competing against boys has accelerated the level of play for the girls as proven by their track record of placing 1st or 2nd in tournaments since last March.

They played other 4th grade boys teams throughout the season, some of which compete at the AAU level, and made it to the championship game. The road to the championship was exciting as fans watched in awe as the teams’ small but speedy defenders, Avery and Lexie Perez, tied up the opponents guards. Nava Mehrpour displayed excellent shooting form in the semi-finals contributing to the teams’ scoring run. The stage was set for a great championship game as both teams had played each other three times during the regular season and all three games were highly competitive, hard fought battles with the scoring lead shifting back and forth. With the pomp and circumstance of a professional NBA game including player introductions and the National Anthem, the girls took their moment in the spotlight very seriously and started the game with three quick baskets from just inside the 3-point line. 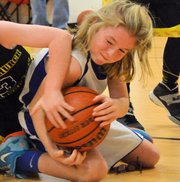 Casey Kerrigan (and her glasses) on the ground as she fights for the ball.

Scoring was led by Caitlyn Shumadine and Lynley Birchard who were ranked in the top 10 league high scorers this season. As always, tenacious defense from Annabeth Holsinger and Maya Kanaan helped keep the AAU Arlington based Honey Badgers on their toes and resulted in a number of steals and jump balls. Kayla Rolph, Allie Wakeman, Casey Kerrigan, Shreya Sivaram and Gianna Russo were beasts in the paint and fought hard for every rebound against a bigger and stronger Badger team. The teams traded baskets through most of the next three quarters and it all came down to the final 45 seconds as the Badgers came within one point of the NOVA girls when a steal in the corner and a quick heads up pass in the paint resulted in a bucket that gave the girls a final 3 point lead. With 8 seconds left on the clock, the Badgers inbounded the ball and released a 3 pointer that rolled around the rim but didn’t go in, the girls rebounded and the buzzer sounded.