Organizations and individuals step to transform ‘The Holiday Season’ into ‘The Season of Giving.’ 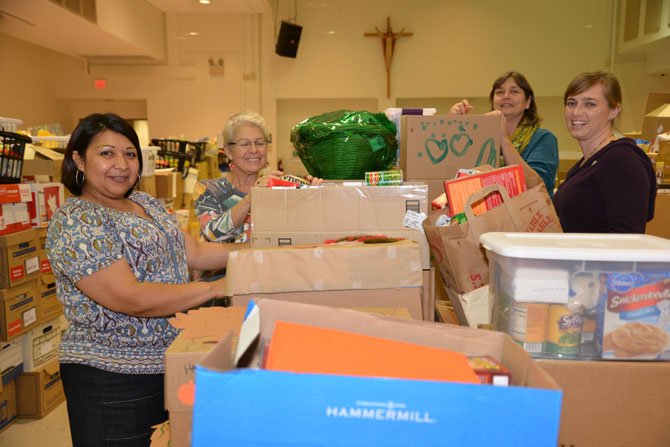 Thursday, Thanksgiving, traditionally marks the beginning of "The Holiday Season." The Christmas Shopping Derby will kick off at midnight for many of the big retailers, and the frantic rush of decorating, card sending, gift buying, wrapping, parties, baking, cooking, preparing for visitors or preparing to travel shifts into high gear. It’s a busy time of year, and for many, a happy one. But for the community’s most vulnerable citizens, the holiday season means extra pressures and concerns. For those struggling to make ends meet, they worry that they may not be able to provide a feast for their families, or fulfill the holiday gift wishes of their children - at least not without a little help. Some of our senior citizens may not have loved ones nearby to care for them. Others may not even have the basic necessity of a place to live.

Thankfully, there are several organizations and scores of individuals in our area who are ready and willing to step up and provide more than a little help for their neighbors in need. These folks have transformed "The Holiday Season" into "The Season of Giving." "It can get a little crazy," said Karen Mulholland of Reston. "You’ve got the pull of your own family needs for the holidays, and then you add collecting food for the Thanksgiving distribution, and then the delivery. It makes for a crazy week or two, but I feel so much better on Thanksgiving Day knowing we helped someone else have a happy family meal." Mulholland and her family rallied her neighborhood to collect for the food drive organized by Cornerstones (formerly Reston Interfaith), the Reston-based non-profit whose mission is to "promote self-sufficiency by providing support and advocacy for those in need of food, shelter…and other human services." 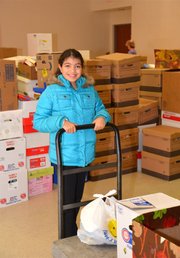 All in the family: 12-year-old Ginny Threlkeld has been volunteering at the Thanksgiving Food Drive Distribution "for as long as I can remember, at least from age 7." Ginny’s dad Bill Threlkeld, is the division director, Neighborhood Resources for Cornerstones.

IN THE LAST WEEK, Wall Street has posted record highs. The local housing market has shown significant improvement all year, and consumer confidence is trending upwards, yet "We are still seeing more people registering for Thanksgiving meals," said Minnie Orozco, Cornerstones Urgent Needs and Life Skills Program Manager. "We have about 928 families who have signed up. That’s an increase of more than 100 families over last year." Orozco and a number of staff and volunteers were on duty Friday night at the donation drop-off point at St. John Neumann’s Catholic Church in Reston. Though nearly buried beneath boxes and bags - many that had been lovingly decorated by school children and scout troops - the workers seemed pretty jolly, as they went about their tasks of collecting, sorting, and balancing boxes for each registered family. "And for the walk-ins, too," added Orozco. "There are always those who just show up, so we try and have extras on hand."

Gail Greenberg has been volunteering with Cornerstones (Reston Interfaith) for more than five years and is on the board of the organization. On this occasion she acted as greeter, accepting donations from generous participants like Subu Sagar, Manisha Raj, and Raj Munusamy who arrived with ten full bags on behalf of the ACT Foundation USA, a non-profit formed to serve the underprivileged in the community. As she floated in and out among the aisles of boxes and bags, Greenberg spoke about why she volunteers. "I don’t think a lot of people know how many people are homeless right here in Reston and Herndon, how many people are spending their nights in our woods," she said. She went on to talk about "100,000 Homes," a national campaign dedicated to providing housing for 100,000 of the most vulnerable and the chronically homeless by July 2014. Cornerstones is a partner in this effort. Part of the campaign’s strategy calls for conducting a homeless "Registry Week." Earlier this year more than 200 volunteers across Fairfax County made contact with 462 homeless persons. Cornerstones (at the time Reston Interfaith) volunteers conducted interviews with more than 100 individuals from the North County Hypothermia Prevention Program, the Embry Rucker Community Shelter, and even in encampments in the woods. "These people need our help," said Greenberg. The interviews showed that nearly half of the homeless were employed, 40 percent had a physical disability, 10 percent were veterans, and the majority cited "unable to pay rent/utilities" and "job loss" as the reasons for their homelessness.

TO EVERYONE’S RELIEF at the Friday Drop-Off event, the donations kept coming in. Before long, everything was in order for the following morning’s distribution. "We have 450 families signed up to collect from here at St. John’s," Orozco reported. "There are other distribution sites around the area, and some places, like Reston Community Center at Hunters Woods will keep collecting and distribute later."

Nothing goes to waste – as Cornerstones Program Assistant Curtis Whitlow collects some of the items not used in the Thanksgiving Food Drive Distribution. "This will go back to the Cornerstones Warehouse for the Food Pantry." With eight years of service to the organization, Whitlow admits he loves his job. "I’m the ‘muscle’ around here! But I’m telling you, we make sure the food we distribute is top-notch!"

Orozco, Greenberg and a small army of Cornerstones staff and volunteers were back at their posts on Saturday morning ready to distribute. Wheeling flatbed dollies, volunteers loaded up, lined up, took the items out to the clients’ vehicle, and then started the process all over again. One of the "volunteer" food distributors was Cornerstones PR and Marketing Representative, Angela Suarez, who took a few moments in between deliveries to highlight some upcoming events and the needs involved to assure success.

"Our next big campaign is our "Holiday Gifts for Kids" seasonal drive," Suarez announced. "Each child will list up to three items, totaling about $50-$65 per child. We have 1500 kids to provide for this year. So far we have taken care of about 1300, so we do need some more donors. For most of these children, these will be the only gifts they will receive for the holidays." Any one wishing to grant a child’s Holiday Wish should visit the Cornerstones website www.cornerstonesva.org and fill out the online donation form – but hurry! Collection dates are Dec. 5 – 7. And Cornerstones "Season of Giving" starts before the traditional Holidays and extends well beyond them, with their Winter Coat Closet program in association with Hunter Mill District Supervisor Cathy Hudgins, collecting winter wear for children and adults from Oct. 31 until Feb. 28, 2014. Information on needs and donation sites for the Coat Closet are also available on the Cornerstones website.

Cornerstones is certainly a significant contributor to the "Season of Giving," but there are others reaching out to community neighbors in need as well. Jake McGlothin, Director of Serve Ministries at Floris United Methodist Church (FUMC) in Herndon, described an impressive list of programs that the congregation has developed over the years, "and they are the ones who have asked for and spear-headed these efforts," noted McGlothin. "It isn’t the church leadership that say ‘here’s what we will support.’ Our people come to us and want to help in so many different ways."

From left: Amy Mintz, in charge if the Advent Giving Program, Director of Serve Ministries for Floris United Methodist Church (FUMC) in Herndon, and Cyndy Cooke, just back from a trip to Sierra Leone where FUMC sponsors a Child Rescue Center and a Hospital, gather around one of the three Gift Trees in the church gathering foyer.

FUMC has a number of outreach initiatives underway. In the gathering area of the church, Christmas trees are decorated with "Wish List" tags rather than traditional ornaments. The recipients of these items include families from Hutchison Elementary in need and children with special needs through Care Connection for Children, affiliated with Inova Children’s Hospital, among others. This year FUMC has taken on 1300 gift requests, ranging from gift cards for local grocery stores, to new jeans and shirts to wear to school. Few of the recipients asked for toys or non-necessities. Just the basics. And the congregation at Floris is responding with overwhelming generosity with some folks taking three or four Wish List Tags to fulfil. Non-members of the congregation are warmly welcomed to visit the church and participate in the program.

"We’ve got another new program starting up this week, as well," reported McGlothin. "This one is about Alternative Giving, he said. "We all have someone we want to get something for at the holidays who just doesn’t need anything else from the traditional gift inventory, so how about making a donation in that person’s honor? " Donations made as part of the Alternative Giving program will benefit the church-sponsored Child Rescue Center and the Mercy Hospital in Sierra Leone, the Guest House Program that offers temporary shelter to the homeless during the coldest winter months, and other local charitable needs. Again, this program is open to non-members of the congregation. If making a donation instead of buying another sweater or knick-knack for Auntie Alice sounds like a good idea, then contact FUMC via their website at www.florisumc.org, or call 703/793-0026.

FUMC will also be participating for the first time in the Guest House program, partnering with organizations like FACETS, a non-profit that works throughout Fairfax County to meet emergency needs and then assist in the gaining of permanent safe housing with counseling and support to improve life situations). The church will join a number of area organizations and religious communities that each offer a week of supervised shelter and needed items to the county’s homeless. "This is a big one for us," admitted McGlothin. "We may be hosting some 400 people for a week in January. We’ve been planning since March. We are now in the volunteer recruitment stage. Knowing our congregation, I am sure they will rise to the challenge."

All of these local organizations and the individuals who support them have their own initiatives, missions, motivations and needs, but together they create the Season of Giving that so many in the community need and depend on – and all of them say there’s room for more aboard the Volunteer Sleigh – especially at this time of the year. Try the websites listed above for opportunities and information. Other resources include www.reston.org and www.herndon-restonfish.org.