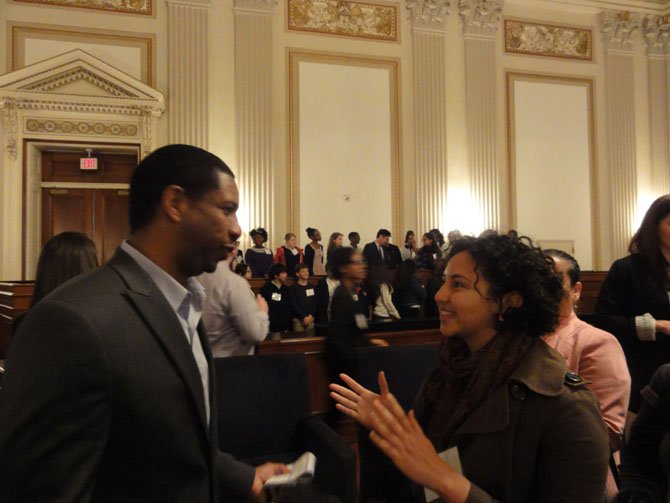 Three South Lakes High School seniors—Mahrukh Chowdan, Marli Saunders and Olivia Vita were chosen by the GEMS Club Initiative to attend the first-ever STEM Diversity Symposium on Capitol Hill to discuss the accomplishments women and minorities have made in the fields of science, technology, engineering and mathematics (STEM), as well as the importance of encouraging more women and minorities to pursue STEM studies and careers. The event took place on Nov. 13. Held in conjunction with members of the Congressional Asian Pacific American Caucus, Congressional Black Caucus, Congressional Caucus for Women’s Issues, and the Congressional Hispanic Caucus, the symposium featured remarks by leaders in Congress on diversity in STEM, including U.S. Senator Mazie Hirono, and a panel discussion and question and answer session moderated by Debbie Myers, General Manager and Executive Vice President of Science Channel.

"Before this event, I did not realize how much I had let stigmas (which I thought I had eradicated) steer my life," said SLHS senior Olivia Vita. "I had wanted to get into the scientific field in ecology but ruled many areas of study out because supposedly ‘artists cannot be scientists.’ I can see more clearly that I really can do anything-I could be an astrophysicist!" She added, "This definitely changed my career path."

The GEMS Club Initiative is a grassroots organization committed to building the STEM pipeline by promoting and encouraging girls. www.gemsclub.org South Lakes High School is committed to engaging students with community groups that can support engaged learning.