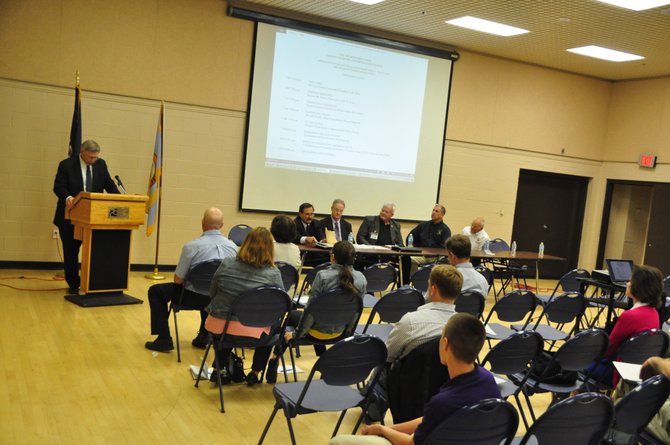 Supervisor John Foust (D-Dranesville) and the McLean Citizens Association hosted a discussion of the ramifications of the 2012 derecho. Photo by Alex McVeigh.

McLean — Around 10 p.m. on Friday, June 29, 2012, the Northern Virginia area was hit by a derecho. A term unknown to many at the time, including local emergency personnel, the fast-moving band of severe thunderstorms hit the area and left three dead, trees down, houses damaged, widespread power outages and the failure of the 911 Emergency system.

The storm began just west of Milwaukee, Wis. at 3 p.m. June 29, as a typical Midwestern thunderstorm. Once it hit Chicago, Ill., a significant change occurred.

“[The storm] spread out and narrowed. Rather than being just rolling clouds with thunder, rain and lighting, it became almost like a razor blade,” said Steve Souder, director of public safety communications for the county. “The weather report really did not predict much more than a typical early summer thunderstorm, of which we see hundreds. So to that degree, it was a surprise at the severity, speed and destruction.”

Of the 420,667 electric meters in Fairfax County, 232,263, or 59 percent, were without power, including 120 intersections. Forty of the 63 county wastewater pumping stations lost power, causing remote monitoring systems to go offline.

“In the week that followed the derecho, temperatures reached 100 degrees [the] following week, telephone service was intermittent and parts of Falls Church had a water boil advisory,” said Supervisor John Foust (D-Dranesville). “At one point so many streets closed in our area that the McLean District Police Station ran out of road closed and detour signs.”

“I think we lost some situational awareness right as the storm hit, partly because of communication problems over the next several hours,” said David Rohrer, deputy county executive for Public Safety, who was chief of Fairfax County Police at the time. “One of the things that strikes me is that I think we should have had the Emergency Operations Center activated throughout the night. It was activated at a monitoring level, but we’ve had discussions since then, and we could have activated it at a fuller level and maintained until we were sure we didn’t need any of the resources or collaborative skills it brings to bear.”

Rohrer said that in events since then, the county has kept the Emergency Operations Center activated throughout the event and maintained staff throughout the day.

THE FAIRFAX COUNTY 911 Center is the 10th largest and 10th busiest such center, out of more than 6,100 nationally.

“In the 911 Center, we watch the news all the time and get weather reports all the time,” Souder said. “It was about 150 miles west of us when we finally realized through what we were hearing that this thing might be something more.”

Fairfax County 911 call volume went up 415 percent in four hours during the storm. The center held up just fine during the initial storm, but when Arlington County was hit, neither Fairfax County nor Verizon, who provides the service, knew that a backup power generator to the Verizon 911 office did not activate.

The failure of the generator to activate caused a backup battery power supply to kick on and provide power for the 911 system. However, the batteries are only designed to provide an uninterrupted power supply until the backup generator kicks in, usually about 15 seconds.

“The whole evening into the next morning, we did not know, since calls were still coming in, that they were operating on batteries,” Souder said. “I got up the next morning, and tried to make a cup of coffee before realizing I couldn’t without power, and suddenly I started getting messages on my BlackBerry. ‘Steve, if you get this, and can call in, please call. We’ve lost 911.’

“It was the longest, largest, most severe and affecting the most people outage of 911 in the 44-year history of 911. We in Fairfax, as well as our neighbors Prince William, Arlington, Loudoun, Manassas and Manassas Park, made history, just not the kind we wanted to make,” he said. “But if it had to happen, I’m glad it happened here. Because we have local government, federal officials in our community, it captured the attention of the federal government, which would not happen with an outage in Des Moines, or Albuquerque. It put into motion a level of attention that would not be anywhere else, and that identified a huge number of deficiencies in the Verizon 911 network that would have never been exposed.”

Verizon’s 911 network covers 12 states. The exposure of these flaws led to what Souder called “a cascade of discoveries by phone companies nationwide” of the very same hidden problems, and subsequent systemic fixes.

THE COUNTY has been dedicating time and resources to finding better ways to reach the citizens with the most timely and pertinent information, which includes increased presence and data collection from social media.

“One thing that has worked very well nationally, and we’re adopting in Fairfax, is a thing called crowd sourcing,” he said. “It allows you, from your phone or home computer to send tweets, and we will capture it on a map so we can see where you are and get information about what’s going on in your neighborhood, as well as get a better sense of the big picture.”

The county’s Community Emergency Alert Network has been established to deliver information such as weather, traffic and major emergency updates to subscribers’ mobile phones, e-mail addresses, pagers and other wireless devices.

Rohrer urged residents of the county to register for CEAN.

“We want, we need, we beg you to register for the Community Emergency Alert Network, so we can push information out to you,” Rohrer said. “We’ll put out robust, real time information, warnings and tips to keep people safe, we need people to read it.”

More information about CEAN can be found at www.fairfaxcounty.gov/cean.