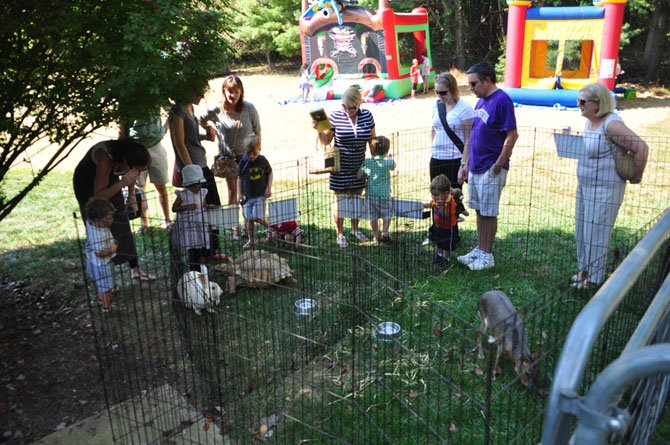 As temperatures rose to near 90 degrees Saturday, Oct. 5 at the annual St. Francis Country Fair in Great Falls, many of the fair’s traditions were turned upside down. For instance, the dunk tank, usually used as a way for children to exact revenge on their friends or have some fun at the expense of church staff on a chilly Fall day, became a welcome chance to beat the heat. 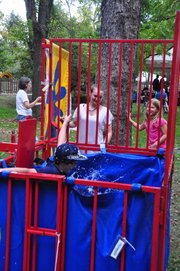 “It was really hot outside, so to get dunked was very refreshing,” said Michael Donoghue, 13. “But it was still a shock to hit the water for the first time.”

Besides the dunk tank, guests at the fair could try their hand at a giant slingshot and a variety of other games with a chance to win candy and other prizes.

The event also proved to be an educational opportunity for some children, as the Bar C Ranch Petting Zoo allowed them to get up close and personal with rabbits, turtles and other animals.

“It was quite a sight to see my 3-year-old petting a turtle that was about his same size,” said Katie Smedlen of McLean. “The only thing that would have been better is if they let him ride the turtle, but I understand that’s probably over the line.”

Besides the animals in cages, Jennifer Caton of Bar C Ranch gave a live demonstration with lizards and other creatures.

“Touching a lizard was really weird, like leather, but a lot creepier because it’s alive,” said Henry Pence, 5. “I like the furrier animals better.”

For the adults, the inside of the church held the annual book sale and the quilt show that featured more than 100 quilts from artists both local and across the country.

Quilter Lisa Ellis created a portrait of another woman named Lisa Ellis for her quilt, a woman she calls her “googleganger,” someone that shares the same name as found on Google.

“My identity crisis is that I want my website to be at the top of the results page when ‘Lisa Ellis’ is Googled. Who is at the top of Google results? The Lisa Ellis from lisaellismusic.com. So this quilt is of her,” she said. “She gave me permission to use her portrait. She is quite the rocker and totally different from me.”

Another section of the show featured selections from “The June Bride” a local quilting challenge that asked artists to create scenes from a wedding.