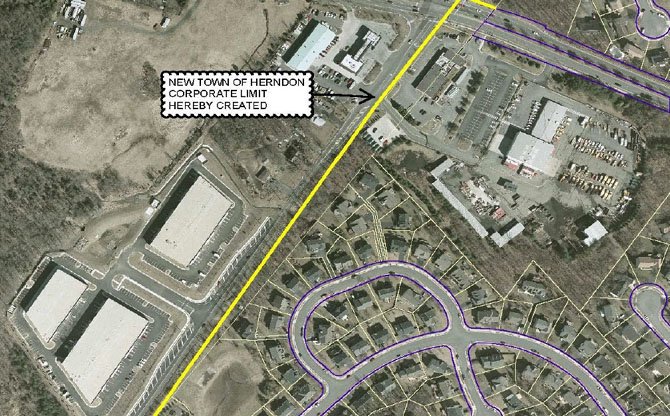 The Town Council has approved a preliminary agreement that would resolve a long-running issue about the town’s western border with Loudoun County, near the intersection of Sterling Road and Rock Hill Road.

Herndon — The Herndon Town Council voted unanimously in favor a resolution that would begin the process of settling a dispute over the town’s western border Tuesday, Oct. 8. The approval sets in motion a process by which the town and Loudoun County could come to an agreement over the precise location of the town’s border.

“This boundary has been under consideration for some time because there are complexities involved in the history of the boundary,” said Richard Kaufman, town attorney for Herndon. “The purpose of this proposed resolution to consider contract with Loudoun County [is] to settle complexities, put [the] matter to rest.”

The proposed agreement would see the boundary of the town extended west about 100 feet, starting at northern edge of Sterling Road and going down the east side of Rock Hill Road.

In 1954, commissioners from Loudoun and Fairfax County met in Herndon at the old fire station and decided to relocate the Fairfax-Loudoun boundary. Previously, the boundary was in the center of Rock Hill Road and went past Sterling Road to a point just north of the W&OD Trail.

THE CURRENT LINE goes right in the center of the town’s building at 1481 Sterling Road, which was the site of the former day laborer center.

“That agreement left out [an] important detail, the town’s boundary, which traditionally followed the Fairfax Loudoun Boundary. Many people thought the town’s boundary remained on center line of Rock Hill Road,” Kaufman said. “The plats and plans up until [the] middle 60s showed the town boundary still there in center of Rock Hill Road. But in late 60s, early 70s, that theory was abandoned, town’s boundary was placed on the existing Loudoun Fairfax boundary, where it has been perceived to be since then.”

In 2005, when town opened the now-closed day worker site at the 1481 Sterling Road building, Loudoun County did not support that use, and preliminary litigation was developed because Loudoun zoning would not permit the town to use the entranceway to the site.

The town lost their case to the Loudoun County Board of Zoning Appeals, and moved the case to Loudoun circuit court. It remained on that docket for several years, and during that time the town council sought legislative solution.

The town sought a special exception from Loudoun County to use the office building and recycling center. Both properties are owned by the Town of Herndon.

Since then, Herndon town staff has been working on a solution to settle the issue with Loudoun County.

“This agreement would move the town line west, about 100 feet at its longest point, to east side of Rock Hill Road, encompasses 100 square foot part Sterling Road, Recycling Center, office building, grassy area that serves as drainage. That would mean Town of Herndon Land Use, Comprehensive Plan and Zoning controls the property, which is already town owned land,” Kaufman said. “It would also mean part of Town of Herndon for [the] first time would be in Loudoun County, I think that would be basis for heightened cooperation and joint projects.

“It also addresses fear from Loudoun Board that somehow the day worker site would open again at the site. I don’t think that’s a likely proposition, but Loudoun County board members might be concerned,” Kaufman said. “This is addressed in agreement, that states for 40 years after date of agreement, town would not establish temporary day worker assembly site on town’s land.”

The first step toward preliminary agreement has already happened, with the Town of Herndon approving it Oct. 8, and the Loudoun County Board voting unanimously to approve it at their Sept. 18 meeting.

The agreement would then move to the Commission on Local Government, a Richmond-based board run by the state that assists with boundary and annexation issues.

The commission has a six-month period to study the agreement and write a report. At least one public hearing must be hosted by both Loudoun and the Town of Herndon, and then both boards must approve the final agreement.

AFTER THAT PROCESS, both parties must ask the circuit court of Loudoun County to appoint special three-judge court to approve or disapprove of the agreement—the court cannot amend it.

If the agreement is approved by the special court, it would become active the following June 30 of whatever year it is approved.

“It would increase [the] size of town by approximately 2.5 acres, make [it] part of the town in Loudoun County, which could be the basis of heightened cooperation between two dynamic local governments,” Kaufman said.

Councilmember Dave Kirby said he approved the resolution because he wanted to see the process play out for the Commission on Local Government, and because it would bring the issue to the town residents.

“There will probably be more than one local hearing where we can hopefully get some more history on this,” he said.

“We have been looking at this for a very long time, as far back as when first on council 20 years ago, there’s always been that question as to whether or not the town line got moved when county line got moved,” she said. “I think involving the Commission on Local Governments to take a look, which would cost the town a significant amount if we took it to court on our own, is a good solution to once and for all have that question answered by the courts.”

Councilmember Charlie Waddell said the process, which involves multiple layers of entities that are equipped to deal with such an agreement, should provide the town and Loudoun County with a clearer picture.

“We’re asking the Commission on Local Government to take a special look, as well as a special court, in case there might be some irregularities,” he said. “Property line ambiguities and the problems they lead to can be expensive. You want a resolution, a definition of where property lines are, and this gives us an opportunity to lay this issue to rest. Protections, oversight and expertise are there.”