Town’s western boundary adjustment made with cooperation of Loudoun County. 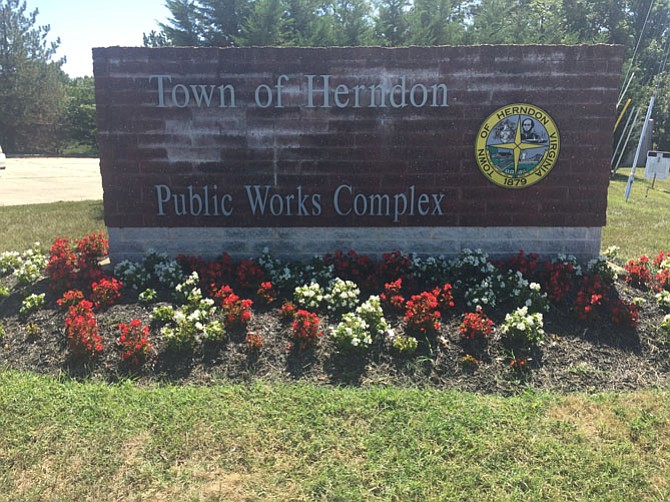 The western boundary of the Town of Herndon is also the boundary between Fairfax and Loudoun counties. The Town owns a parcel that straddles this line — approximately 2.2 acres of the property lies within unincorporated Loudoun County, while the remaining 12.5 acres are within the Town of Herndon and Fairfax County. The Town currently uses this property (hereinafter referred to as the “Town property”) for offices, storage and public works facilities.

In the past, the Town has claimed that the location of the Town’s western boundary was slightly further west, following the centerline of Rock Hill Road, which would place the Town property wholly within Herndon’s corporate limits. The uncertainty as to the location of the boundary led to disagreements between Herndon and Loudoun County regarding planning and zoning jurisdiction for the disputed part of the Town property. These disagreements began in 2005, when the Town authorized the use of a part of the property for a temporary day labor site – where day laborers could assemble to seek short-term work. The County zoning administrator at that time determined that some of the Town’s existing uses on the Loudoun County side of the property were not permissible unless a special exception was granted by the County. The Town sought legal remedies to this determination; however, ultimately the County granted a special exception for the Town’s existing use of the property for an office building and recycling collection center, subject to several conditions.

The Town and County eventually initiated discussions to enter into a voluntary settlement agreement to resolve their dispute, end further complications regarding the use of the Town property, and clarify the location of the boundary line.

SOURCE: Report on the Town of Herndon-County of Loudoun Voluntary Settlement Agreement, Commission on Local Government, Commonwealth of Virginia, September, 2014

“Effective midnight on August 31, 2015, the western boundary line of the Town of Herndon was officially adjusted to encompass 2.4 acres of land located in Loudoun County. The remainder of the 4.25 square mile town is located in Fairfax County,” according to Herndon documents.

“The land had been in the town but also in Loudoun County. The court decision clarifies that the town has jurisdiction over use of the land,” according to Anne Curtis, Herndon spokesperson.

A special court appointed by the Virginia Supreme Court, as a result of a joint petition filed by both the town and Loudoun County, made the boundary clarification.

The relevant land measures exactly 2.43118 acres. That sliver officially clarifies the town’s western boundary at the eastern line of Rock Hill Road, off of Rte. 606.

The land is not zoned for residential use and is currently used by the town for storage and public works facilities.

THE ADJUSTMENT GIVES the Town jurisdiction over use of the acreage, although it has no “immediate practical implications for the town,” according to Town documents.

“The Town of Herndon has always been, and will continue to be, located in Fairfax County,” said Mayor Lisa Merkel. “The decision of the court, which the town and Loudoun County worked together to petition, simply clarifies the town’s ability to appropriately use land within our boundary,” she said. “We greatly appreciate Loudoun County’s collaboration with us on this petition and their general cooperative spirit as our immediate western neighbor.”

Last month’s action added a home at the end of Monroe Street into the town.

That house and its 1.1178 acres of land “lies on the town’s border in such a way that the real estate appears to be in the town,” according to Herndon Town Council documents.

The Town and Fairfax County Board of Supervisors cooperated so that the homeowner “receives sanitary sewer service from Fairfax County and water, refuse, recycling, public street and snow removal, bulk pick up and leaf and yard waste removal from the Town of Herndon.”

The homeowners had expressed the desire to have their real estate incorporated into the Town of Herndon.

The Town of Herndon was incorporated by the General Assembly of the Commonwealth of Virginia on January 14, 1879 and is the third largest town in the Commonwealth and is home to more than 23,000 citizens.