What’s in a Name?
Votes 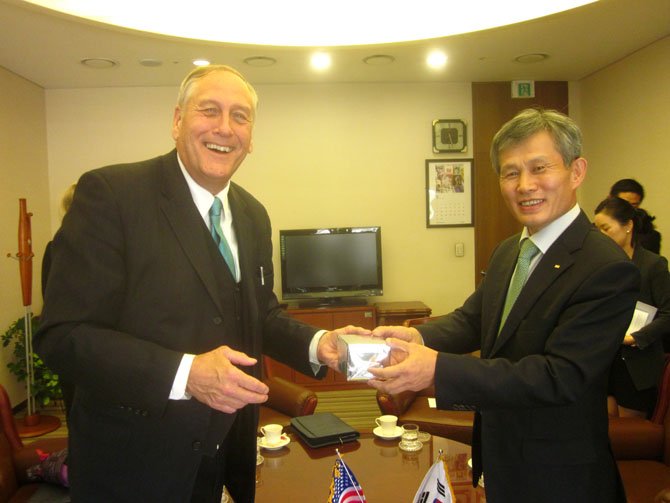 State Sen. Dave Marsden (D-37) talks with the chairman of the Korean Federation of Industries during a trip to South Korea in August. Marsden, and his wife, Julia, spent a week in South Korea as guests of the Government of the Republic of Korea. Photo Contributed

Virginia’s gubernatorial candidates Ken Cuccinelli (R) and Terry McAuliffe (D) may be light years apart on most issues, but on one issue they’ve reached a consensus. 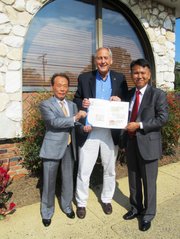 Last month, they both pledged support to Virginia’s growing population of Korean Americans to use the dual names of “East Sea” and “Sea of Japan” to denote the body of water between Korea and Japan in Virginia’s textbooks. Koreans view the “Sea of Japan” designation as a legacy of Japanese colonial rule.

Currently, more than 2.5 million Korean-Americans reside in the U.S. and nearly 150,000 of them live in Virginia.

“As governor, going forward, I will wholeheartedly support the effort … to have our textbooks and other teaching materials reflect the concurrent names as we pursue education excellence in Virginia,” Cuccinelli wrote in a Sept. 16 letter to the Korean Community of Virginia.

“As governor, I will ensure that as new texts are purchased or downloaded, they reflect this important historical truth …,” McAuliffe wrote to the Korean Community of Virginia on Sept. 25.

For the past year, state Sen. Dave Marsden (D-37) has been leading Virginia’s legislative efforts to add the “East Sea” in public school textbooks.

Marsden has been working with Peter Y. Kim, a Chantilly businessman, who is president of the non-profit Voice of Korean Americans (VoKA). In January, Kim formed VOKA to promote the use of “the East Sea,” contending the naming dispute is critical to Korean Americans for a number of reasons.

“The entire Korean-American community in Virginia is very concerned about the situation, particularly related to educating Korean-American children about their heritage that is currently not recognized by the state,” Kim said.

“The effort is gaining momentum in Virginia,” Marsden said, noting the “East Sea” Bill will require all future textbooks purchased by the Virginia Public Schools of Education to reflect both names.

“What we call things is important, and names have deep meaning,” Marsden said. “This would go a long way in speeding up the integration of our Korean-American population, and making people feel accepted and respected.”

The dispute over the name has been simmering between Japan and South Korea for decades. In 1992, objections to the name Sea of Japan were first raised by North Korea and South Korea at the Sixth United Nations Conference on the Standardization of Geographical Names.

Since 1997, South Korea has campaigned the International Hydrographic Organization, the governing body responsible for the naming of bodies of water, for the additional use of the East Sea name on the grounds that the term Sea of Japan only became popular globally during Japan’s colonial rule of the peninsula. Japan says the name Sea of Japan has been used internationally since the 19th century, before the Korean Peninsula came under Japanese rule.

“What’s important to me as a state representative is that we already teach students about the controversy, so our textbooks ought to reflect that fact,” Marsden said. “All they are looking for is a position of respect.”

Del. Tim Hugo (R-40) announced he is sponsoring a similar bill in the House this year.

Kim said his group’s final goal is to include “the East Sea” in all textbooks used at elementary, junior high and high schools in 50 states by March 2017, when the International Hydrographic Organization holds a meeting to discuss Seoul’s request for the concurrent use in formal international maps.

“In keeping with America’s high standard of education, our children would benefit from learning geography that includes current geo-political information,” Kim said.