RA Board to Decide on Lake Anne Land Swap
Votes

RA Board to Decide on Lake Anne Land Swap

Swap would assist in redevelopment efforts, vote to be held Nov. 21. 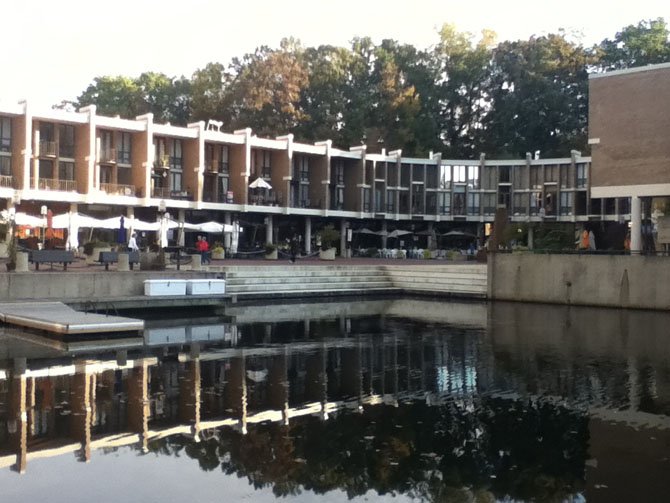 A view of the trees over Lake Anne Plaza. A proposed land swap would send the piece of land containing the trees, currently owned by the Reston Association, to a developer for part of a parking garage intended for Lake Anne redevelopment. Photo Contributed

Reston — The Reston Association Board of Directors will vote on a land swap involving two parcels of land near Lake Anne at their Thursday, Nov. 21 meeting. The swap would involve Reston Association trading a property owned by them that Lake Anne revitalization developers would consolidate into their overall plan for the area.

The Reston Association currently owns a crescent shaped 1.01-acre parcel just northeast of the plaza, which runs along the south side of North Shore Drive from Chimney House Road to the entrance to the Lake Anne parking lot.

In exchange for that piece of land, the proposal calls for the Reston Association to receive a 1.1-acre plot that runs along Baron Cameron Drive just east of Village Road.

This section of land along Baron Cameron Road would be part of a proposed land swap, after which the Reston Association would own it.

According to John McBride, a lawyer with Odin, Feldman and Pittleman, and the RA’s land use consultant, the proposal could also include as much as $500,000 from developers for improvements to RA land and facilities.

These numbers come with the assumption that with the swap, all RA covenants agreements on the land will become void, and the zoning uses proposed in the Comprehensive Plan Amendment dealing with Lake Anne Redevelopment would go into effect.

LEADING UP TO THE VOTE on the proposed swap, many in the community wondered why the property values being used come from a letter of opinion rather than an official assessment.

“We chose to use a letter of opinion over appraisal, because a letter is half the cost, and both are prepared by same person, a certified appraiser,” McBride said. “Since this transaction involves exchange and looking at relative values between two properties, a letter of opinion of value can be more economical, and better suited. This is especially true with our situation, neither property has a flood plain, steep slopes or Chesapeake Bay Resource Protected Area to limit development.”

Many in the community also questioned if the trade was an equal swap, given that the RA’s parcel contains many tress that form the backdrop of the plaza, while the Baron Cameron is not as ideal.

“The property that would come to the RA in a swap needs a lot of work, there are invasive exotics, drainage issues and lot of issues with trash and debris,” said Larry Butler, director of Parks and Recreation for the RA. “In their letter of intent, a number of those things have been addressed in some way, shape or form.”

The developers plan to use the RA parcel for part of a parking garage that would supplement additional planned underground parking.

“The ratio of parking spaces to retail square footage is still less than the typical number, which is five per 1,000 square feet, but we believe the difference will be made up by walkers, bikers and those who use bus transit,” said David Peter of Republic Land Development and manager of Lake Anne Development Partners, the company that was awarded the revitalization project by Fairfax County.

Peter said that the swap is part of an overall strategy to consolidate parcels, with the hope that increased density would support present and future businesses.

“When Lake Anne Plaza was built, there was really no retail competition. Now there’s more than 1.8 million square feet of retail space within 2-1/2 miles. Lake Anne has lost its market dominance,” he said. “Its primary customers live within a third of a mile, then there’s a secondary market of people who can drive within five minutes, which is a key retail metric, and there’s a tertiary market in greater Reston. Those are the visits we want to increase.”

THE RA BOARD held a public hearing during their regular meeting Thursday, Oct. 24, where many in the community said they didn’t want to lose the trees on the RA parcel to a parking garage.

“In our letter of intent, we committed to minimize the loss of trees on the parcel we would be getting 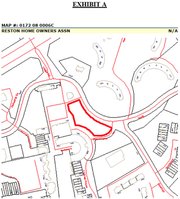 A section of land, currently owned by the Reston Association, is proposed as part of a land swap to be used as a parking garage for Lake Anne redevelopment.

from RA. You won’t see that parcel clear cut with every tree gone,” Peter said. “Clearly some will be lost to facilitate a parking garage but many of the trees around the edges will be retained, we’ll try to work around them. That’s one of the commitments we made in the letter of intent, and if we get a full contract, it will be included with that as well.”

Others at the meeting said they wanted to see this revitalization go forward as soon as possible.

“Reston is not hurting for trees. We’re hurting as the landmark iconic trademark of Reston is not functioning effectively. It needs to be revitalized and the land swap is a vital part of the plan,” said Phil Lilienthal, a longtime Reston resident. “We’ve been considering this for years, and the plan is not being recommended by people interested in selling out developers and clear cutting the trees, it’s being done by people interested in our community’s well being.”

Andy Sigle, vice president of the RA’s board, summed the feeling of many at the meeting with the inherent conflict of the proposed swap.

“To put it simply, the revitalization of Lake Anne makes me happy. The idea of putting a parking garage on open space, where we have mature trees, makes me sad,” he said. “That’s what we’re grappling with, and that’s what we’ll have to decide on.”

The RA will be accepting public comment on the matter up until the Nov. 21 meeting. Comments can be made by calling 703-435-6570, or by e-mail to member_services@reston.org.

More information on the proposal can be found at www.reston.org, under “News Center,” then “News Releases.”