Revitalization Efforts In The Works 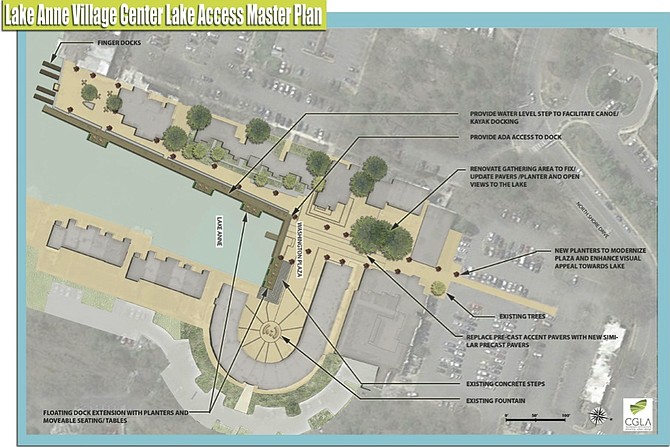 LARCA presented this rendering to the Reston Association last fall. The RA Board of Directors will be discussing these recommendations this week. Photo courtesy of the Lake Anne at Reston Condominium Association 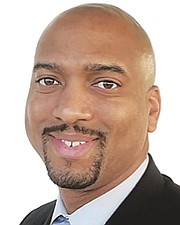 This rendering was presented to the Reston Association Board of Directors in October. The board will continue discussions about the proposal in March.

Areas highlighted on the map will be closed to traffic, parking and public access for the entirety of the project. Reston Association anticipates completion and reopening of the site by early March. Notifications have already been sent to adjoining property owners.

The Reston Association hired Garrett Skinner as director of its new Capital Improvement Planning and Projects Department this month. He began work on Monday, Jan. 9. The new department, which includes three current RA employees, is responsible for the oversight of the association’s capital projects.

Skinner and his new department comes after the association’s highly-criticized handling of the Lake House, a property that went over budget and yielded revenue shortfalls ever since it was purchased in July 2015 for $2.6 million.

While the association still works on hiring an independent organization to conduct a review of the Lake House’s acquisition and renovation, Skinner’s immediate goal is to develop a stronger project management process.

“We need to ensure the money that is being spent on these projects are done wisely and that we are able to effectively track the progress of projects and that we can avoid any risks associated with those projects that may have been experienced in the past,” he said on his fourth day on the job.

“As I start to get a handle on what projects are active and what’s planned, my first order of business is to make sure that the projects that are scheduled and funded are making the progress they should make and are meeting the expectations of the board and residents of Reston,” he added.

The ongoing construction of new Silver Line metrorail stations in Reston will incentivize redevelopment around the stations and Reston Association wants to make sure it keeps up with development.

“We’re looking at what changes will need to be made in our facilities to keep up with the rest of the development in Reston,” says Larry Butler, RA’s senior director of Parks, Recreation and Community Resources.

Butler and Skinner identified these major revitalization efforts that are in the works right now.

Reston Association’s Reserve Study forecasted more than $122,000 in expenditures for the Hook Road Ball Fields between 2016 and 2020. This includes repairs to the park’s baseball, basketball and soccer fields and tennis courts.

The study is conducted every five years to identify which RA facilities need maintenance and allocates funding.

“Most of our facilities have not been updated since the developer gave them to us, in some cases back in the 60s,” Butler says.

Groups that frequently use the facilities have approached RA staff to urge them to make changes, including adding dugouts, storage areas and a permanent bathroom facility, and other upgrades for safety and playability.

Instead of making repairs, a landscape architect will be hired to draw up some ideas to revitalize the park, according to Butler.

“I make no predictions on where it will end up,” he says. “It could end up that there is very little change or there could be a wholesale change.”

Meanwhile, funding for the replacement of the Lake Anne Dock was approved by RA’s Board of Directors in November 2015.

In 2016, RA staff began planning and scoping for the project, which included the removal of approximately 500 cubic yards of sediment that accumulated beneath the dock. LARCA and the Lake Anne Merchants Association (LAMA) approached RA staff to discuss combining their efforts.

“The lake is a great asset, but it’s underutilized in terms of how the public can enjoy it,” says LARCA President and resident Rick Thompson. He is also the husband of RA Board Secretary and At-Large Director Eve Thompson. Together, they own the Lake Anne Coffee House and Wine Bar located in the Lake Anne Village Center.

“You can walk down the dock, but you’re about 4 feet above the water and there’s nowhere to tie up your boat,” he says.

Melissa Romano, resident and owner of the Lake Anne Brew House located in the plaza right off the lake, agrees.

“When you come here to the plaza there is really only space for maybe two pontoon boats to tie up here at the bottom of the concrete steps, and anyone who tries to tie up their boat along the wooden dock anywhere finds that they’re 4 feet below sea level and they have to poll volt out of their boat, which is nearly impossible,” she says.

LARCA would like to add dock fingers that extend from the main dock so more boats can access the plaza. LARCA would also like to add water-level steps to facilitate canoe and kayak docking, which would also help bring the dock into compliance with federal American with Disabilities Act requirements. Floating extensions of the dock for seating and tables are also desired.

“If we were to go in and just replace our dock, like-for-like, we would plan on starting that in October,” says Butler.

However, since the dock is located in an historic district, proposed changes not only have to go through Reston’s design and review process, but also through the Fairfax County Architectural Review Board.

“There’s no question that adding those elements would complicate the process some,” Butler says. “Then there’s the question of funding. Who would pay for those additional elements?”

RA has budgeted to replace the dock and remove sediment, but that’s just a maintenance activity, according to Butler.

Both Romano and Thompson emphasized the value that the plaza brings to the community, including the many events that utilize the site.

The Reston Community Center hosts its weekly “Take A Break Concert” series during the summer at the plaza. The plaza is also host to two farmers’ markets: the Fairfax County Park Authority’s Reston Farmers Market from May to November each year and LARCA’s Lake Anne Fall Farmers Market from Nov. 19 to Dec. 17 each year.

“To not realize that the community’s needs may have changed over the past 50 years and to consider just rebuilding something exactly how it is seems, to me, like a foolish move,” says Romano. “Small changes that can make big impacts don’t have to be difficult and they don’t have to be expensive.”

While it is unclear how much the revitalization of the dock would cost or which organization should pay for improvements, it seems all the community agrees that improvements should be made.

“New development is happening all around us and Lake Anne, in our minds, still needs to make sure that we’re staying fresh and adjusting the changing needs of the community in 2017,” says Romano.

The RA Board of Directors will discuss this project at its next meeting at 6:30 p.m. on Thursday, Jan. 26, and will vote on whether to advertise a public hearing about the project during its Feb. 23 meeting. This meeting would only gather public input on the proposed improvements from the Fairfax County’s Office of Community Revitalization.

Since October, the Reston Soccer Association has been seeking approval from the RA to raise funds to pay for improvements to the Lake Newport Soccer Park on Reston Parkway.

To allow this, the RA would need to hold a communitywide referendum, potentially in the spring or later. While RSA offered to manage fundraising for the project, RA would still need to grant permission for the improvements because the property is on RA land.

“There’s a lot of work to be done over the next three months before the board even makes that decision,” Butler says.

Since the RSA submitted its preliminary proposal, RA staff have asked the organization to answer more than 100 questions it has about the project.

“We’re hoping the community sees this as a net benefit,” says Robert Anguizola, president of the RSA.

Anguizola’s nonprofit organization does not own any soccer fields, so it uses county facilities and rents out RA parks for its members to play. The two fields at the Lake Newport Soccer Park are the ones his organization uses the most.

“We’re hoping to make this our home base,” he says. “We’re the primary users of the park and we want to make a contribution to the community. We know the adjustments will be for the benefit of our members.”

The RA and the RSA have contributed thousands of dollars to make repairs to the damaged fields, according to Anguizola.

“Turf is going to expand the number of hours that those fields can be used and the quality and safety will be much higher than the grass fields,” he says. “Because of the enthusiasm for soccer and the density of Reston, the grass fields get a lot of use and abuse to the point where it’s very difficult, if not impossible, to maintain.”

His organization would also like to install lights, bathrooms, a clubhouse, concession stands and a seating area.

“We are very open to working with the community to consider other amenities for the park,” he says.

Anguizola’s ideas include a small playground for young children and a running trail.

Very rough and preliminary costs for the improvements are estimated to cost more than $2 million. Because of this, the project would likely be done in phases.

“We can’t afford to do the entire project all at once,” Anguizola says.

Butler hopes to work with the RSA so that an updated presentation can be given to RA’s board in March. Directors will then discuss and determine if they want to send the proposal to referendum.

The dredging of Lake Newport began on Tuesday, Jan. 17, with deployment of equipment and closing of specific areas surrounding the Lake House, the Lake Newport tennis facility and adjoining trails.

Reston Association is working with Lake Services, Inc. to dredge the accumulated sediment from the main coves of the lake. Dredging will not occur at the shoreline edge or within 5 feet of any dock structure. RA anticipates removing approximately 5,000 cubic yards of material at the cost of approximately $50 per cubic yard. The project is budgeted for $257,330.

Routine dredging is part of RA’s lakes maintenance program, which helps to extend the life of the lakes. As lakes age, they eventually fill in through sedimentation. Sedimentation occurs as material from the surrounding watershed accumulate in the water. Those materials include soil from stream erosion, construction sites and unstable slopes, in addition to road sand, leaves and debris from trees, street gutters and storm sewers.

The staging area will be near the Lake House property. Sediment will be removed from the lake and placed in trucks, which will be hauled to a disposal site in Chantilly.