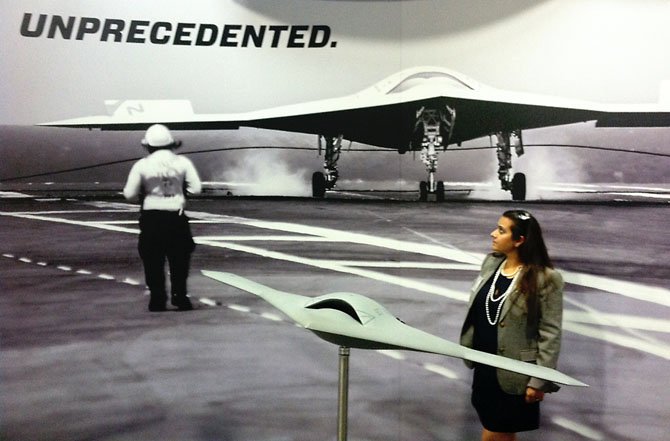 During the Association for Unmanned Vehicle Systems International (AUVSI) conference, Aug. 12-15 at the DC Convention Center, Princes Aliyah represented the Great Falls community as the CEO of Kashmir-Robotics to announced the first ever Wildlife Conservation UAV Challenge. In response to President Obama’s Executive Order on Wildlife Protection, Kashmir-Robotics is hosting a National Wildlife Conservation Challenge to foster innovation and invention in the design, fabrication and utilization of unmanned aircraft to assist with counter poaching and illicit wildlife trafficking.

It calls on students, hobbyists, academics and corporations to cooperate in a Build & Fly challenge that emphasizes the integration of sensors, embedded systems and communications in a robust and high endurance aircraft.

The challenge is based on simulated wildlife poaching and trafficking activities. Each Challenge Scenario will be composed of three phases.

Phase Two—teams will fabricate their aircraft and demonstrate air worthiness and safety at their local AMA flying fields.

Phase Three—teams will compete in the challenge scenario. Specific details of the challenge scenario will not be released until the morning of the competition, so teams will need to be prepared to adjust flight profiles, sensor parameters and data processing as needed. Evaluations will be based on performance of the aircraft and ability of the aircraft systems to support the mission. Monetary and scholarship prizes will be awarded to regional winners and national champions. The winning UAV will participate in counter-poaching missions throughout South African National Parks.

Poaching and trafficking of wildlife is the third largest organized crime in the world. South Africa’s flagship national park, the Kruger, has lost more than 50 percent of its rhinos since 2010. The national Army has been sent to help rangers stop the poachers, with daily reports of violent gun battles and mounting human casualties along with the rhinos. The introduction of UAVs has demonstrated a dramatic advantage for the rangers, enabling effective interdiction with reduced risk to the rangers.

According to the Executive Order, “Poaching operations have expanded beyond small-scale, opportunistic actions to coordinated slaughter commissioned by organized criminal networks.” Funds from poaching enables criminal networks to expand into other activities including human, drug and weapons trafficking—contributing to instability in Africa and around the world.

If you are interested in sponsoring or creating a Great Falls Team email: wildlifeuav@alkareemfoundation.org or join the Facebook page for updates https://www.facebook.com/WildlifeConservationUAVChallenge.