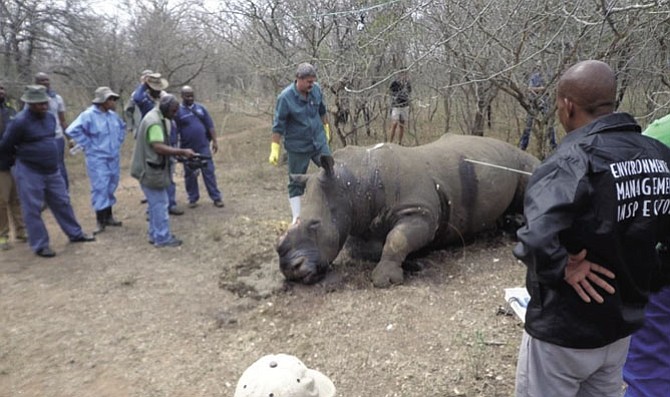 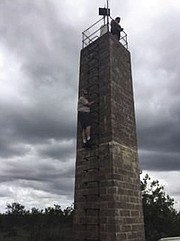 Mike Strang climbing down from a tower near Kruger National Park during wide area network testing. 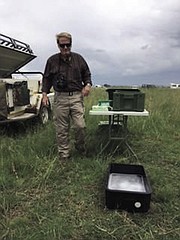 The rhino is an iconic mammal famed — and poached — for its horn, but in South Africa moves are afoot to beef up its protection.

Thanks to a project funded by the Global Environment Facility (GEF) that began in 2013, rhinos are safer from poaching in South Africa today than they have been for a long time.

“The biggest challenge has been the consistent and relentless efforts of poachers,” said Strang, Great Falls resident and one of those leading the UN Environment-GEF rhino enforcement programme. “Despite many arrests, organized crime syndicates are continuing their activities. The toll on the men and women who fight this scourge is incalculable.”

THE AIM of the project, according to Strang, is “improved forensic technologies and capacity, strengthened data gathering, sharing and analysis systems at national level, and enhanced cooperation structures and mechanisms at international level to support law enforcement efforts along the whole trafficking chain.”

The project has adapted to the changing techniques and tactics used by poachers.

“The introduction of hi-tech equipment has proven to be the best way to maximize scarce human resources in the protected areas where the rhinos roam. The days of just driving around or walking a perimeter are gone,” said Strang.

Strang is working with partners to introduce sensors, the internet of things (IoT), cyber security and LoRa wide area networks to stay ahead of syndicated crime networks.

The University of Pretoria’s Veterinary Genetics Laboratory is the centre for rhino forensic work in the country.

The GEF project provided some of the funding for horn DNA analysis from stockpiles and live rhinos, while the Department of Environmental Affairs funded forensic work related to illegal rhino killings. This enabled the purchase of things like refrigerators, forensic kits, and a new laboratory. Most importantly, the project enabled the training of additional lab technicians who will be an asset for many years to come.

The training of biodiversity investigators and crime scene management experts, the production of training videos, the development of an Advanced Course for rangers, the carrying out of prosecutor training, and the setting up of a magistrates’ colloquium, as well as a regional magistrates’ colloquium (including South Africa, Mozambique, Namibia and Lesotho).

PARTNERING with the Environmental Wildlife Trust (EWT), a local non-governmental organization (and thanks to funding from the United States of America), enabled the project to increase the number of personnel taking the advanced ranger training course from 500 to 1,400. “Training is nearing completion now and, judging from the feedback we’ve received, it has been a huge success,” said Strang.

“The project has also recently partnered with Peace Parks Foundation to focus on another pilot project which uses Smart City technology, long range wide area networks, and Internet of Things protocols and promises to completely change the way rhinos are protected,” said Strang.