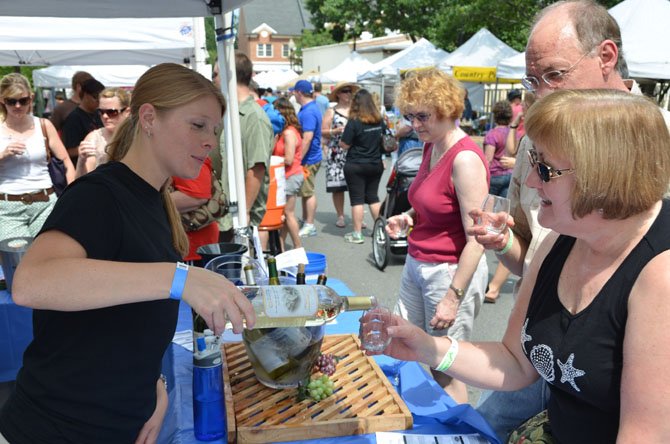 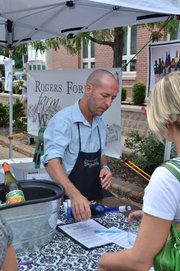 The Town of Herndon held its 25th Herndon Labor Day Festival, on Monday, Sept. 2 from on the Town Green at 777 Lynn Street next to the Municipal Building. For $20, attendees received admission to hear the music, a tasting glass and unlimited wine tastings, plus four beer tastings with the option to purchase more. For $10, a person could enter to hear the music.

Members of the Herndon Woman's Club near one of the entrances to the festival.

A wide range of live music was performed on the stage by the Town Green, including the bands Delta Saints, Anthony Clark, Ducky Duke & The Vintage, and Blue Label. Also there was a craft show and sponsorship gallery, along with culinary demonstrations by chefs working through Cookology, a recreational cooking school based in Dulles Town Center in Sterling. This was the third year the festival was attended by Culinary Showcase, and the culinary demonstrations or classes were taught by chefs Roslyn “Ros” Clark and Mark Chang. Topics they covered included Asian cuisine, paleo diets, knife skills and sauté. 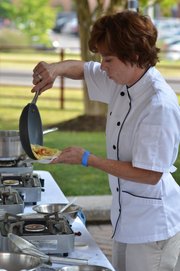 “The event started with just three wineries and one food vendor. Now we have grown up to 12 wineries, two microbrew, 15 craft vendors and four food vendors,” said Holly Popple, the performing arts special events supervisor in the Town of Herndon. The Town of Herndon Parks and Recreation Department produces the event, working in conjunction with the Herndon Woman’s Club.

“We are a service organization, and this is our biggest fundraiser,” said Janet Greene, a member of the Herndon Woman’s Club. Membership to the club is not limited to only residents of Herndon. “The money we receive from this event goes back to other education and scholarship programs.”

“This is our first year here at Herndon,” said Johnny Puckett, operator of the vending station for Rogers Ford Farm Winery. The family owned farm is located at Rogers Ford Road in Sumerduck, Va., and brought a selection of wines for sampling including some dry white wines and red wines. “In vino veritas,” quipped one worker.

Michael Kimball managed operations at the station for Williamsburg Winery Limited. “This festival kicks off our fall festival season, so it is really when we begin to showcase a lot of our wine,” said Kimball. “We look forward to this festival every year and get great comments and suggestions about our wine.” This year the Williamsburg Winery was offering a new sweet blend wine, the Midsummer Night’s White. “This is the first festival we are pouring this wine at,” said Kimball.

“It is a great time for people to go out and taste the wine and enjoy the music, said Herndon resident Mary Sears. An art teacher at St. Joseph’s school in Herndon, Sears rented a vending station and was selling painted wine glasses with her sister Shelly Perry. “It has been a nice, steady crowd, more mellow than the Herndon festival. We always do well at this show and I bring new designs to keep it fresh.” The pair calls their craft business “Glorious Goblets.”

Another artist attending the event was Ashburn painter Ray Hart. “I began painting in 1997, and I do everything myself,” said Hart. Hart paints in what he calls an open, surreal style, and had attended last year’s Herndon Labor Day Festival.

“This show was more organized and less crowded than some other wine tastings I have attended,” said Abbey Delozier, a resident of Manassas. Alcohol sales ended at 5 p.m. and no alcohol containers were permitted outside the festival site.

To learn more about the Herndon Woman’s Club, visit their webpage: http://www.herndonwomansclub.com.