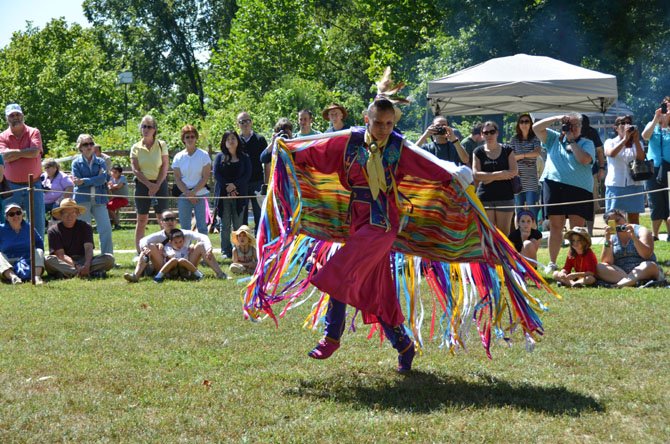 Leah Fortune from the Rappahannock tribe performs before the audience. Ryan Dunn

Everyone was invited to join in and participate in one of the last dances by the Rappahannock Tribe. 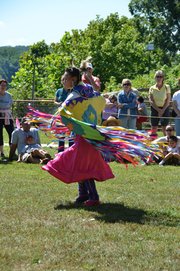 Leah Fortune from the Rappahannock tribe performs a dance at the 16th annual Virginia Indian Festival at Riverbend Park.

At Riverbend Park in Great Falls thousands of visitors stopped by to attend the annual Virginia Indian Festival. Mixing with the crowds and greeting visitors was Park Manager Marty Smith. “I have been working at Riverbend Park for 20 years, and manager for 10 years,” said Smith. It was Smith who organized and developed the concept of an educational event about the indigenous people of Northern Virginia for the general public.

This was the park’s 16th annual Virginia Indian Festival, and was attended by Native Americans from the Monacan Nation and the Chickahominy, Mattaponi, Pamunkey, Rappahannock, Tauxenent and Upper Mattaponi tribes. “The tribes that participate enjoy the atmosphere, enjoy the event because it is an educational event. Our purpose is to bring people to learn about the tribes. It was a great event, people seem very engaged, as I circulated people seemed very happy. We try really hard to have a variety of different learning and hands on activities,” said Smith.

“The moment the drums start it seems everybody turns and is drawn to the event. It is definitely one of the highlights of the festival.” Riverbend Park Manager Marty Smith

Jerry Fortune (right) enters with a partner from the Rappahannock tribe to begin the Grand Entry Dance.

THE FESTIVAL ran from 10 a.m. to 4 p.m., and admission was $5 per person. Park employees, including Jordan Libera, demonstrated how to carve a dugout canoe from a tree trunk. Libera has been an employee at the park for two years, and covered parts of the tulip poplar tree trunk with clay. “The clay helps us to not burn parts of the tree we want to keep … a dugout canoe like this could carry three or four people.” 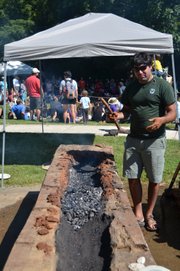 Leah Fortune was one of the participants in this year’s dance performance by members of the Rappahannock tribe. Fortune has attended several of the festival events at Riverbend. “I have been practicing [dancing] since I learned to walk,” said Fortune. “There is something so charismatic about the dancing and the drums,” said Smith. “The moment the drums start it seems everybody turns and is drawn to the event. It is definitely one of the highlights of the festival.” The Rappahannock tribe showed several of their dances with accompanying drum music.

Craftsman and primitive technologist Matt Weatherholtz demonstrated how American Indians tanned deer hides, the traditional way of softening and conditioning hides to make into clothing. “My focus is how the indigenous people used their skills in the land,” said Weatherholtz. Weatherholtz is now constructing a longhouse at the park using construction practices similar to the Native Americans. A longhouse is the traditional home of forest-dwelling tribes of the Mid-Atlantic region. It is expected that the structure will be completed by October. 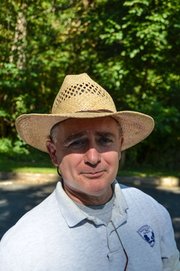 Other hands-on activities included the opportunity to throw spears and shoot a bow and arrow. Boy Scout leader Bill Lee with members of Boy Scout Troop 2535 based at the Arlington Cathedral of Saint Thomas also attended the event. “This is a nice easy way to introduce them to indigenous people and how organized the Powhatan nation was,” said Lee. Several of his scouts were in the process of earning the Indian Lore badge.

Nick Walkosak, a resident of Arlington, came to the park with his wife and son.

“My wife is a fraction Native American and we try to go to as many of these things as we can,” said Walkosak. The final count in attendance for the day’s event was about 2,100. “We have every intention of having the Indian festival again next year,” said Marty Smith. “That is what is inspiring for us, people really seem to enjoy this event.”

RIVERBEND PARK is located at 8700 Potomac Hills St. in Great Falls. For information about the park, visit www.fairfaxcounty.gov/parks/riverbend.