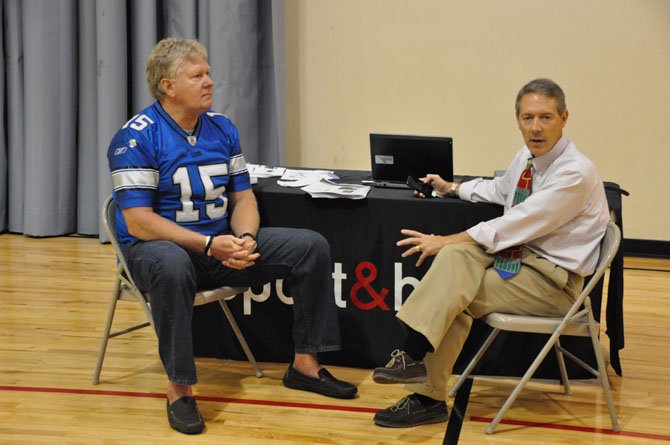 Herndon — “After two weeks, 60 percent of people who have had concussions have recovered, but after six weeks, that percentage is less than 90 percent.”

“We have a lot of parents coming to us asking about ways to prevent their children from tearing an ACL [knee ligament], but we don’t get a lot of questions about preventing brain injuries, so we decided to be pro-active,” said Kevin Boyle, director of Explosive Performance, Sport&Health Clubs athletic training program. “Concussions are an injury people don’t see, but they can often be the most devastating, especially when one isn’t properly treated, then the athlete goes back out and suffers another one.”

JOHN STUFFLEBEEM, a former football player and three-star vice admiral in the Navy, spoke at the event about his experiences with traumatic brain injuries.

He remembered a friend who ended up committing suicide because he had chronic traumatic encephalopathy, a degenerative brain condition that affects those who have suffered multiple concussions.

Stufflebeem said he went in for analysis once his playing days were over, and figured he had suffered about five concussions over his three-year career. Doctors told him he had suffered 19.

“After a hard hit in my day, we were [told] to shake it off, run a lap, eat a salt tablet,” he said. “But today it’s time to raise awareness with kids. Helmets are designed to protect the skull, not the brain inside.” 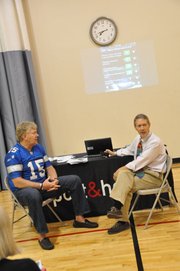 Dr. Gerald Gioia, chief of the Division of Pediatric Neuropsychology at Children’s National Medical Center, said that even as recently as 10 years ago, he had to convince people that hitting your head while playing could lead to serious problems.

“We don’t believe that the solution is to eliminate sports, we just want the parents and coaches, who naturally have the best interests of their players in mind, to take the lead when it comes to learning,” he said. “We need parents to be armed with tools and information. It’s very unlikely that there’s going to be a medic or physician trained in diagnosing concussions on the sidelines.”

Gioia helped develop an app for cell phones that can help parents and coaches work their way through symptoms after a player hits their head.

The app asks a series of questions of the adult, and has several for the players, and once the answers are plugged in, it will give a recommended course of action for the player’s treatment.

According to research, athletes who have been diagnosed with concussions have reported symptoms such as headaches, nausea, dizziness, blurry vision, light or noise sensitivity, sluggish feelings, memory problems, confusion or a sense that things don’t feel right.

Coaches have observed players with glassy eyes, a dazed look, confusion, poor balance, mood changes, memory loss and lack of awareness as symptoms of a concussion.

“By definition, a concussion causes the brain to move back and forth within the skull, which causes stretching of the brain, which can lead to chemical changes and cell damage,” said Dr. Catherine McGill, a pediatric neuropsychologist at Children’s National Medical Center. “Once these changes occur, the brain is more vulnerable to additional trauma.”

McGill said the brain has a texture similar to mayonnaise, which can tolerate normal movement, but not the movement that comes with a head to head collision, or a player hitting their head on the turf.

“After two weeks, 60 percent of people who have had concussions have recovered, but after six weeks, that percentage is less than 90 percent,” she said. “Everyone has their own timetable for recovery, and the most important thing is that an athlete has 100 percent recovered before they are allowed back onto that field.”

ONE OF THE PURPOSES of the seminar was to educate parents and coaches that it’s not just a head-on collision on a football field that can lead to a concussion. Lacrosse, soccer, field hockey and other traditionally “non contact” sports leave players just as susceptible to those injuries, even if it’s just falling to the ground, or trying to head a ball.

While football seems to have a stranglehold on America’s sports scene, with record-breaking ratings, revenues and attendance, Stufflebeem said that the concussion issue is the most serious threat it faces.

“This is a side of the game that parents, coaches and players need to be fully aware of when they decide to play,” he said. “Football is a juggernaut right now, but if it’s going to fade over the years, it will be because of this.”

The free Concussion Recognition and Response app is available on the Google Play Store and the iTunes App store for iOS and Android devices.

The most up-to-date information about concussions and their treatment, including fact sheets, can be found at www.cdc.gov/ concussion.