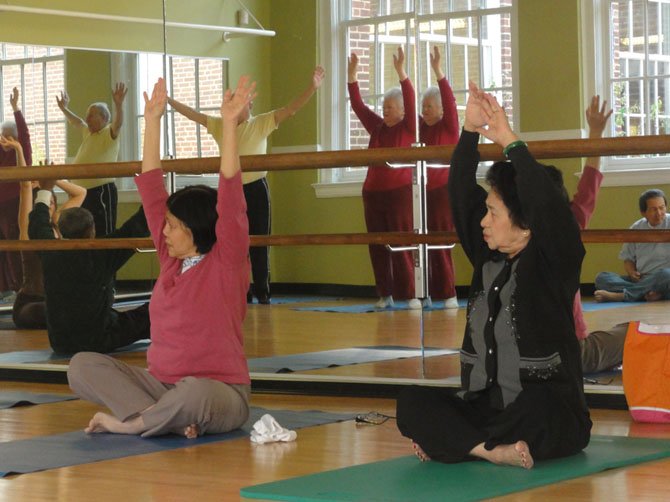 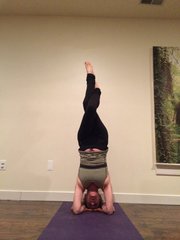 A 70-year-old yoga student performs a handstand at OneAum Yoga in Potomac, Md. Instructor Sean . FM says he teaches seniors with a wide range of abilities.

Shortly after 10 a.m. on any given Tuesday or Thursday morning, 84-year-old Lola Wulchin can be found slowly stretching into a downward facing dog pose or lunging into a warrior one posture. The Vienna resident has been a yoga devotee at East Meets West Yoga Center in Vienna for slightly more than two years. In fact, she credits twice-weekly, gentle yoga practice with boosting her health and improving her quality of life.

"I had been bothered by a lot of neck pain from arthritis," said Wulchin. "I had seen a pain management doctor who gave me shots, I had physical therapy, but I still had neck pain and very little range of motion."

A turning point came after she was struck by a passing comment from one of her doctors. "My neurologist mentioned that his wife had been doing yoga for back pain and it had helped. So I decided to try it."

Wulchin embarked on a twice-weekly ritual that she describes as life changing. "My gentle yoga classes have been a Godsend," she said. "I have less pain now. I still have some stiffness, but I have a better range of motion."

She isn’t the only senior to reap the benefits of yoga. Researchers at the American Congress of Rehabilitation Medicine and the American Academy of Physical Medicine and Rehabilitation conducted an eight-week study of 23 adults aged 62 to 83 years old. They designed a yoga program for that age group with the goals of improving lower-body strength and flexibility. Participants attended two 90-minute yoga classes per week, and were asked to complete at least 20 minutes of directed home practice on alternate days.

The study found yoga programs tailored to elderly adults can be a cost-effective way to prevent or reduce age-related changes, specifically an increased risk for falls, dependency and other ailments.

Local yoga teachers agree, saying that while yoga classes designed for the 55 and older crowd are increasing in popularity, myths about the practice keep some seniors out of yoga studios.

"The main thing that I hear is that you have to already be flexible to do yoga," said Sandy Pradas of Joyful Heart Yoga in Mount Vernon. "People look at pictures in magazines of people wrapping their legs around their necks or doing other advanced poses and they think, ‘If I can’t do that, then I can’t do yoga.’"

Pradas, whose students are mostly between 50 and 75 years old, said, "Everybody can do yoga, but there are a lot of types of yoga and not every type is good for everybody."

Dawn Curtis, owner of East Meets West Yoga Center, recently completed a course at Duke Integrative Medicine and believes an increasing interest in yoga among seniors will be known as the Silver Tsunami.

"That is baby boomers going into yoga," she said. "Yoga for seniors is going to be the biggest target audience that yoga teachers are going to have because of the number of baby boomers who are looking for alternative ways of exercise because they are not going to be able to keep up with impact exercises like running."

In fact, she says gentle yoga classes are among the most popular at her studio. "I have students who are as old as 84. We deal with people who can’t get on the floor," she said. "We use chairs. We work on balance because that is a main concern among seniors. We work on coordination because that is another thing that tends to diminish as we age."

Jennifer Collins, a countywide program specialist in the Office of Senior Adult Programs in Arlington, said that yoga classes that are specifically tailored for those 55 and older are among her office’s most popular.

"Some of our [yoga] classes fill up within minutes of opening," said Collins. "We have people sitting at computers at our senior centers ready to register as soon registration opens because they know the classes are going to fill."

Sean .FM (yes, that is his name) of OneAum in Potomac, works with seniors with a wide range of abilities. He said it’s important to find a class that is a good fit.

"There are many kinds of seniors," he said. "There are seniors that are immobile and some who are really active. We have a student who is almost 70 and I just taught him how to do a handstand. We created Yoga Rx for those with mobility issues. We work them in the chairs. We also do a lot of private sessions."

George Lynch, fitness director at Vinson Hall Retirement Community in McLean, is planning to incorporate yoga classes into the community’s fitness program. The instruction will be tailored to meet the needs of his clients. "We have residents who are in their 80s, 90s and some in their 100s. Everything we do is designed specifically for seniors."

Andrew J. Carle director of the Senior Housing Administration at George Mason University said an increasing number of retirement communities are offer yoga classes as part of their fitness programs. "The future of senior housing will include science-based wellness activities like yoga," he said. "Anything that gets us beyond senior activities such as birthdays, Bibles, bingo and bridge is a step up."