Have Harmonica, Will Mentor
Votes

Have Harmonica, Will Mentor 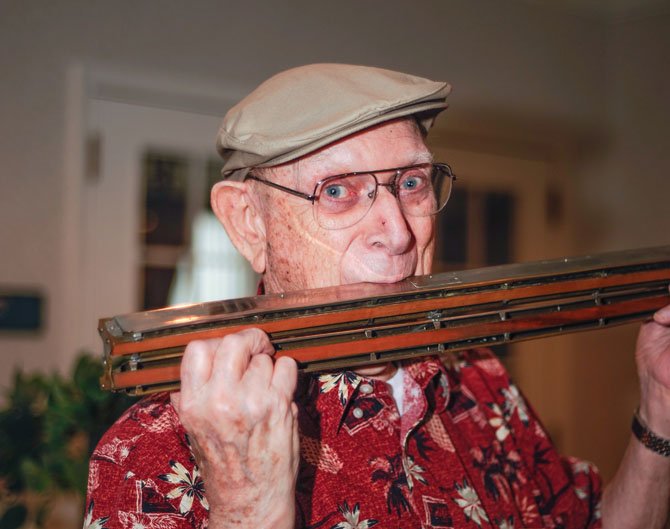 Mount Vernon — There are harmonicas that fit into pant pockets and there are harmonicas two feet long. There are harmonicas for guitar accompaniment and harmonicas designed for orchestras. Alexandria resident Jack Hopkins, co-founder of the 23-year-old Capitol Harmonica Club, has at least 16 different types and has been playing since he was six years old. The instrument has taken him to a variety of places and brought him a number of opportunities.

Hopkins hopes to spread his love of the harmonica beyond current club members. The Capitol Harmonica Club is open to new members and meets every Tuesday evening at Wesley Methodist Church. Hopkins looks forward to the day when the harmonica is the next big thing in modern music.

“I hope it will come back,” Hopkins said. “All it takes is one or two people who are top notch players, repeated over the radio or seen on television.”

Hopkins, who will be 94 this month, still recalls the plastic toy he mastered when he was a small child.

“It was a little plastic harmonica, like a toy,” Hopkins said. “I found that I could get a scale on it, and figured that I should be able to play a tune. So I just fiddled around with it until I could, which rather astonished my unmusical father, so he did buy me a better one, one with sharps and flats.”

Thus began Hopkins’ lifelong relationship with the harmonica. He took piano lessons and played the flute and piccolo as a child, but the harmonica is the instrument he could never really put down.

EVEN AFTER World War II, when harmonicas were scarce due to the U.S. boycotting German goods like Hohner harmonicas, Hopkins picked the instrument back up when he once again had the time and access.

Although he resumed harmonica playing post World War II, he said he did not pursue formal training until he settled in the Washington D.C. area in 1964. While he could find no local teachers at the time, he did find an opportunity to launch himself into a world of fellow harmonica enthusiasts.

“I was having a harmonica in for repair and it came back with an announcement for a conference in New York City,” Hopkins said. “All it cost was $50 plus room and board which I thought was pretty remarkable.”

While surrounded by experts at the New York City conference, Hopkins learned that he taught himself well and had developed proficient skill. With some help from musicians he met in New York City, he went back to the Washington D.C. metropolitan area armed with the skills and techniques to offer lessons locally. He wanted to offer the services he hadn’t been able to find as a harmonica student.

“I came back and offered to start teaching,” Hopkins said. “For a while I taught with Fairfax County recreation programs, and then in Arlington County, and then at Northern Virginia Community College. I was teaching the reading of notes as well as the instrument.”

IN THE EARLY 1990S, Hopkins started the Capitol Harmonica Club with two other enthusiasts. The club is one of three harmonica clubs in Virginia that supports the annual Virginia HarmonicaFest, the state’s event for harmonica musicians and fans.

“There were no harmonica clubs around here, and I was fortunate enough to find another gentleman who played the chromatic harmonica,” he said. “Then we found a third and the three of us got together and found the Capitol Harmonica Club. That was 23 years ago. Unfortunately many members have become ill, some have died, and others have otherwise left.

The club is now two members strong, meeting weekly to jam, and they are eager to mentor anyone with interest.

What people don’t necessarily realize, Hopkins explained, is the harmonica is a versatile instrument. Where most people start out with a diatonic one, with an eight-note scale and no sharps and flats, there are harmonicas made to play classical music, to play blues music, and the list goes on. He, for example, is partial to classical music.

“People who play the standard harmonica enjoy playing alone or with guitar complement,” he said. “I enjoy playing orchestration. I like playing classical music on the chromatic harmonica.”

The toy that Hopkins’ parents tucked into his stocking more than 80 years ago has become a passion, a door to opportunities and a way to meet and entertain people everywhere he has lived. He used to play the harmonica during baptisms at Wesley United Methodist Church and he now entertains fellow residents of Westminster at Lake Ridge, a retirement community where he has now settled. Perhaps it has even kept him young.

“I don’t feel 94 years old,” Hopkins said. “I have more vitality. People ask me if I have been playing harmonica all of my life, and I say, ‘not yet.’”