Jack Wood, 16, is on a mission to take organists out of the endangered musician category. 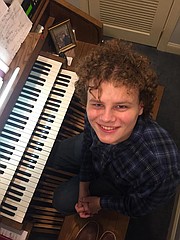 Sixteen-year-old organist Jack Wood can pinpoint the exact moment when the grand instrument piqued his interest. The young musician, who has to date played more than 40 different organs for concerts and church services, said that when he was just four years old, a conversation he heard between his parents and his childhood church’s music director about the shortage of young organists struck a chord.

Although Wood did not start pursuing the organ seriously until 2014, the Great Falls resident and Herndon High School junior is on a mission to take organists out of the endangered musician category.

“I began to really like the organ after listening to hymns on YouTube,” Wood said, recalling how his interest snowballed into a passion. “Knowing in the back of my head that there was a scarcity of organists made me want to do it even more. I had been playing the piano for years, and the organ was like the piano, but more complicated. I liked the fact it was a challenge. My goal now is to major in organ performance in college and to one day be the music director and organist of a church.”

Wood, who practices “anywhere between one to five hours per day” is well on his way to turning his musical passion into his career. To date, Wood has headlined in four concerts open to the public.

Since he splits his time between his father’s house in Great Falls and his mother’s Middleburg home, he has been able to play for both Catholic and Protestant church services in both Fairfax and Loudoun Counties. At just 16, Wood is completely comfortable taking the initiative in finding these opportunities, considering it a privilege to play for every congregation and audience.

“What I’ll do is reach out to the Music Directors, then we meet, and if they like what I do, then they book me for church services,” Wood said. “Usually, at first I think they are a little skeptical because I’m a teenager asking if I can play these prized, grand organs. Once I play for them, they do realize that I’m a serious organist.”

Wood, who is ready and willing to play the organ for any local church service, said he credits his organ instructor, Dr. Kimberly Hess, for fine-tuning and developing his skill.

Hess, an Instructor of Music History and Music Theory at Marymount University, has been working with Jack for the last year and a half. She said such intense appreciation for the organ is rare among the youth, and that Jack is an extremely talented organist with the passion it takes to go far.

“I love working with Jack,” Hess said. “It’s rare, but people who find their way into the field of playing the organ seem to love it and become very intense with it. There aren’t very many young people like him.”

Before beginning lessons with Hess, Wood said actually he couldn’t read music, in spite of a history playing piano. After spending years learning piano songs by ear, Hess said Jack learned to read music in just a year and half.

“As unusual as young organists are, it’s also rare for students to have an organ in each of their homes,” Hess noted. “He’s very resourceful. He was able to find a free organ on Craigslist for his mom’s house.”

Jack Wood’s father, John Wood of Great Falls, said that his oldest son has always shown musical promise. He also recalls the day that Jack first heard about a lack of rising organists, but says it has been relatively recent that he realized this instrument was not going to be a fleeting interest for Jack.

John said that he has enjoyed watching Jack evolve into a more serious, accomplished musician and has come to really grasp just how talented Jack really is. Jack’s family, which includes two younger sisters and a younger brother, has watched him play not only in Virginia churches, but also at the helm of organs in other states. No matter where the Woods go, Music Directors all relay the same message to Jack’s parents: he’s the real deal.

“We’ve taken him all over,” John said. “When we are in New Jersey visiting my parents, I take him to churches there. Music directors are always impressed. Also we rent a house on the beach in New Jersey every year, and one summer I remember visiting this small church in this small town called Strathmere, where the people encouraged us to take him to a church in Ocean City with a really large organ. Jack played for a few days with the music director there, too. At all these places, I always ask if he’s any good. They always say, ‘Wow. He is awesome.’”

John said his son has never asked for money, but is often told that he is too talented to play for free.

Meanwhile, Jack said that he does not yet charge for tickets to his concerts or set prices for playing at church services because he feels lucky for already knowing his calling.

In terms of specific goals, Jack said he is working on mastering what he said is considered one of the hardest pieces for an organist to tackle.

“At some point I would like to complete ‘Widor’s Toccata’ [a symphony for the organ],” Jack said. “Once you can play that, you’re the real deal. I’ve tried, but it’s pretty hard to get.”

Jack said that as he pursues his dreams and continues taking the steps toward becoming a career organist, he hopes he can inspire other young keyboardists to think about similar paths. As fun as the ivories are, he said that adding pedals to the mix can be a thrilling challenge.

“My advice to any accomplished young pianists is that, if you like this article and if the organ interests you at all, become an organist,” Jack said. “We need more young organists. It would be awful if there came a day where churches had to be without organ music. Rock music and guitars can be good, but that isn’t traditional church music.”

For any inquiries about Jack and his music, visit his Facebook page at