‘Victims’ Rights Are a Necessity’
Votes

‘Victims’ Rights Are a Necessity’ 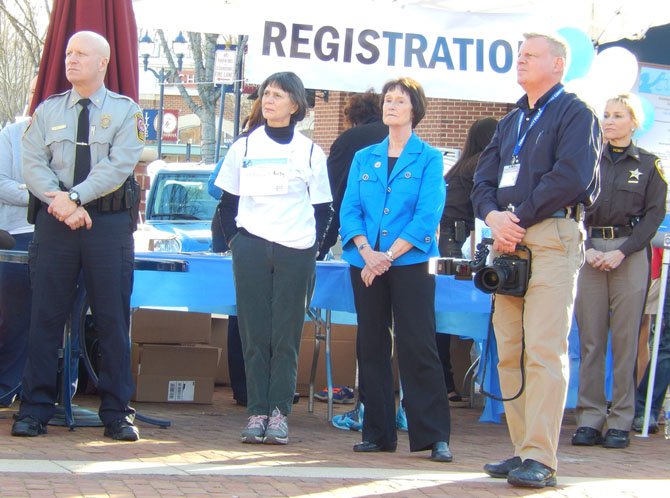 Siobhan Russell was just 19 when her ex-boyfriend killed her. Ron Kirby, a noted regional transportation planner, was murdered in his Alexandria home in November by an unknown assailant.

And on Sunday evening, April 6, they and other crime victims were honored with a 5K walk, remembrance ceremony and candlelight vigil. The Fairfax County Law Enforcement Foundation and the county Police Department’s Victims Services Section held the event at Fairfax Corner.

Before the walk, Commonwealth’s Attorney Ray Morrogh addressed the crowd of more than 100 people gathered in the shopping center’s outdoor plaza. He praised the detectives who investigate criminal cases and said the men and women of Fairfax County’s police department are the best in the country.

"I can’t help but think, on a day like this, of [Arlington’s] Linda Franklin, killed [in October 2002] by the D.C. Sniper, or Vanessa Pham [a Falls Church teen murdered in 2010]," he said. "We’re always going to have victims and there’s always going to be sadness. But I love my job as a prosecutor and it takes all of us to support these victims."

THE EVENT kicked off National Crime Victims’ Rights Week, April 6-12. The purpose is to promote victims’ rights and acknowledge crime victims and their advocates. It also marks the achievements made on crime victims’ behalf since passage of the Victims of Crime Act in 1984, providing support and including them in the justice process. Participating Sunday were victims’ friends and relatives, plus the professionals who support local victims of homicide, trauma, sexual and domestic violence, child physical and sexual abuse, stalking, human trafficking and suicide.

"We’re blessed in Fairfax County to have great community support for the victims of crime," said county Police Chief Ed Roessler Jr. "These victims provide valuable input to our Victims Services Section so we may be better advocates for the needs of victims and survivors."

"Victims Services helps victims cope with the trauma and the aftermath of victimization," said Board of Supervisors Chairman Sharon Bulova. "It also lessens the inconveniences often associated with participation in the criminal justice process. Crimes against persons, property and society are all down again this year in Fairfax County. And with public safety as one of our highest priorities, we intend to keep it that way."

Also speaking was Will Marling, executive director of the National Organization for Victim Assistance. "Victims’ rights aren’t a luxury, but a necessity, and there’s a state commitment to provide dignity and respect to those impacted by crime," he said. "Under the U.S. Constitution, the accused has 23 protections, but those impacted by a crime have none. We’re hoping to change that with U.S. House joint resolution 30."

"Victims’ rights don’t cost that much and don’t violate the rights of the accused," continued Marling. "Victims should have equal footing under the law, and Virginia has a commitment to this. I’m honored to be here today with you."

Attendees wore or carried signs telling who or what they were there to honor. Some bore the name of a loved one and others acknowledged victims of particular crimes. Michele Putnam, who works in Vienna, was there to honor sexual-assault victims.

"It’s important to recognize the victims and the support in the community," she said. "A lot of times, the focus is on the criminal and the case investigation, but we need to make sure the victims aren’t lost. It’s also important to raise awareness of these crimes to prevent re-victimization."

There with Putnam was Rob Twitchell; his friend’s daughter was struck by a drunk driver at age 3. "She had severe brain trauma and is now a special-needs child," he said. "She’ll never be the same."

Sully District Police Station Chaplain Duke Bendix said, "Wrong actions can sow in our hearts the seeds of despair, hopelessness, anger and hatred. But we must be vigilant to guard against these feelings from taking root in the soil of our hearts."

He then prayed to God to be a "fortress and salvation" to crime victims and their loved ones. "Minister comfort, consolation, grace and perspective into the hearts of those who’ve been victims or know someone who has," he said. "Bring hope into their hearts and draw them into your peace and love."

DURING THE CANDLELIGHT VIGIL, several people came to the podium and gave the name of the person they were honoring. Others said they were there to remember the victims of crimes including human trafficking, homicide, stalking, robbery, domestic violence and drunk driving.

Wendy Claunch, a family friend, came in honor of the organization, Dating Abuse Stops Here (DASH), and Oak Hill teen Siobhan Russell, murdered by her ex-boyfriend in 2009. She said Sunday’s event signified that "victims are not forgotten."

"We need to raise awareness that memories of the victims are still there and their lives had meaning and purpose," said Claunch. "One reason we started DASH was to keep Siobhan’s memory alive. And as her parents say, ‘If we can stop one other person from becoming a victim of dating abuse, then her death won’t have been entirely in vain.’"

Through DASH, teens learn the early warning signs of an unhealthy and potentially dangerous relationship, such as stalking, possessiveness and controlling behavior. For more information, go to www.datingabusestopshere.com.

Wearing her DASH jacket adorned with a photo button of Siobhan in her cap and gown after graduating from Mountain View High, Claunch said, "She was killed nine weeks after graduation. She was moving on with her life without her ex-boyfriend and he didn’t like that."