Department is struggling to recruit and maintain officers. 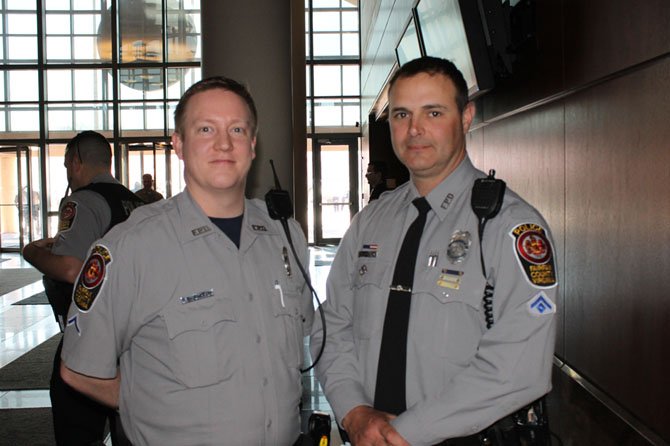 School Resource Officer Rich Barron and Mike Scanlon, president of the Fairfax Fraternal Order of Police, were among the hundreds of police officers who attended the public hearings on the Fairfax County budget at the Government Center on April 10. Photo by Janelle Germanos.

The police filled the auditorium, leaving standing room only. Several police testified before the Board of Supervisors, advocating for pay raises and parity with other public safety departments, such as the firefighters, who are seeing an increase in pay this year.

“The consistent neglect of our department has created a large disparity within our agency and the region,” said Mike Scanlon, president of the Fairfax Fraternal Order of Police, at the hearing.

The frozen pay scale, which has been frozen the longest of any jurisdiction in the National Capital Area, Scanlon said, has made it difficult for police officers to afford living in Fairfax County.

ONLY 29 PERCENT of sworn police officers live in Fairfax County, said Joe Woloszyn, president of the Fairfax County chapter of the Virginia Division of the Southern States Police Benevolent Association, at the hearing.

Pay has also made recruiting difficult, with many potential candidates and previous Fairfax County police officers leaving for jurisdictions that offer more money.

“The lack of consistent pay parity and fair compensation has hurt morale and the ability for this department to maintain its employees,” Scanlon said.

The police academy is only able to be filled to a 46 percent capacity, Woloszyn said.

“When we got into this profession, there were no illusions that we would become rich doing it. But we did expect and we had it relayed to us that we would be taken care of. However, this has not been the case,” Woloszyn said.

The budget for the past five years has been distracting for police officers, according to Sgt. Tom Harrington, a representative of the Fairfax County Police association

Woloszyn says all Fairfax County citizens should be concerned.

“At this rate, it will become even more difficult to handle calls for service, especially for a department that is already stretched thin and has such a low officer per capita ratio. Clearly the lack of success in recruiting is a direct link to the stagnant salary and broken promises,” he said.

Police officers filled the auditorium and lobby of the Fairfax County Government Center during the public hearings on the budget on April 10.

THE RECENT END of the Department of Justice hiring freeze, Harrington says, will lead to a further loss of officers and potential recruits.

“I’m here to tell you, that a Fairfax County, college-educated police officer with three to six years of service and experience is going to be at the top of a recruiting campaign for any federal law enforcement agency,” Harrington said.

According to Woloszyn, about 85 percent of the police in Fairfax County have college degrees.

Sean Corcoran, president of the Fairfax County Coalition of Police, said that many officers feel a sense of betrayal due to the pay freezes.

“There are still many who want to be Fairfax County police officers and serve their community, but even their resolve is waning,” Corcoran said.

Harrington said that 15 years ago, the department had more officers who viewed their role as a police officer as a career, taking every opportunity to excel and not viewing the position as just a way to get a paycheck, but as a position that gave them a sense of pride.

“Unfortunately, the last five years has produced officers who view this department as a job, in large part due to the reality of the salary freeze,” Harrington said.

According to Woloszyn, a large number of officers are expected to leave the department in 2014.

Although the police advocates said they felt betrayed by the county, Board of Supervisors Chairman Sharon Bulova said the county is very appreciative of their service, and said she wants to work with the officers to make sure they are being properly acknowledged.

“These have not been easy years. We do appreciate you. We appreciate the work that you do. We recognize that you put your lives on the line for us, for our community,” Bulova said.