The British and the Slaves – July 1814
Votes

This news disturbed Alexandrians because, like their neighbors further down the Potomac, many owned black slaves. In the 1810 census, 20 percent of the Alexandria population was enslaved. Although the Gazette articles suggested only that the British would take away enslaved black Virginians as they would take away any property, Alexandrians knew, too, that slaves were perfectly capable of running away to the British on their own. The Gazette also reported that the British navy had been ordered “to receive and protect” escaped slaves.

The idea of the British receiving and protecting enslaved Virginians who had run away actually began during the American Revolution. In 1775, Lord Dunmore, the last royal governor of Virginia, fled from Williamsburg to a ship in the Chesapeake Bay. As part of his attempt to reassert royal authority, in November 1775 he declared free “all indentured Servants, Negroes, or others . . . that are able and willing to bear Arms” to help crush the Virginia rebellion.

Then 38 years later, in March 1813, a British secretary of state ordered the British in the Chesapeake: “If any Individual Negroes shall in the course of your operations have given you assistance, which may expose them to the vengeance of their Masters after you retreat, you are at liberty, on their earnest desire, to take them away with you ... but you must distinctly understand that you are in no case to take slaves away as Slaves, but as free persons.”

As a result, as historian Alan Taylor wrote, “The number of escapes surged during the summer and fall [of 1813] as word spread that the British officers welcomed runaways.” Taylor estimated that by the end of 1813 at least 600 slaves had escaped to the British.

The first escapees to reach British ships sailing the Bay were usually young men. Sometimes they would return to land to bring back friends, mothers, fathers, sisters, brothers, cousins, uncles, and aunts, including relatives who had been sold to different owners on different farms along the Chesapeake and its adjoining rivers. At times, whole families — men, women, and children — would come together. They would come to the British ships in stolen boats or canoes or would meet the British when they came ashore looking for water or for slaves to carry away.

The enslaved Virginians were well acquainted with the waters of the Chesapeake and the surrounding land. For years they had been used in the bay as watermen in small boats fishing, catching crabs, tonging oysters, and transporting goods. On land, what little free time they had was mostly at night. While their masters slept, they would roam the woods and fields to hunt for meat, fish for themselves, meet future spouses, steal food, worship, and dance. One Virginian wrote, “The day was their master’s, but the night is their own.”

They became experts in the paths and byways of the land and the inlets of the Bay and rivers. This knowledge not only helped them to escape, but also, as the British gradually learned, it helped them lead British raiding parties to farms and villages, and then back to ships before the arrival of American militia.

When the British returned to the Chesapeake in force in early 1814, they understood that not only could escaped slaves help them militarily, but also that escaped slaves deprived their owners of what the owners considered valuable property. Thus, in the spring of 1814, the British commander issued a proclamation that even more clearly than before welcomed enslaved Virginians on board British vessels or at British posts “where they will have their choice of either entering into His Majesty’s Sea or Land Forces, or of being sent as FREE Settlers to the British Possessions in North America or the West Indies.”

As this proclamation indicated, the British enlisted black male escapees into a British fighting force called the Colonial Marines. The marines were issued uniforms that included the British red coat and were trained at a fort established on Tangier Island in the Chesapeake Bay. Once trained, the new marines became a valued part of British raiding parties. The freed slaves were particularly valuable as soldiers, not only because they were considerably less likely to desert than white British sailors but also because they fed whites’ fear of black ex-slaves armed and coming after them.

On Aug. 13, Alexandrians learned that these armed Colonial Marines were on the lower Potomac. That day the Alexandria Gazette reported that the British had landed at Monday’s Point on the Yeocomico River on Virginia’s Northern Neck. The British troops included “5 or 6 black platoons in red, commanded by British officers.” They attacked Kinsale, burning houses and carrying away property. Outraged, the Gazette added, “Weep, Britain weep, and blush at the destitution and shame, which marks thy countrymen!” 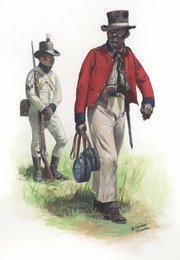