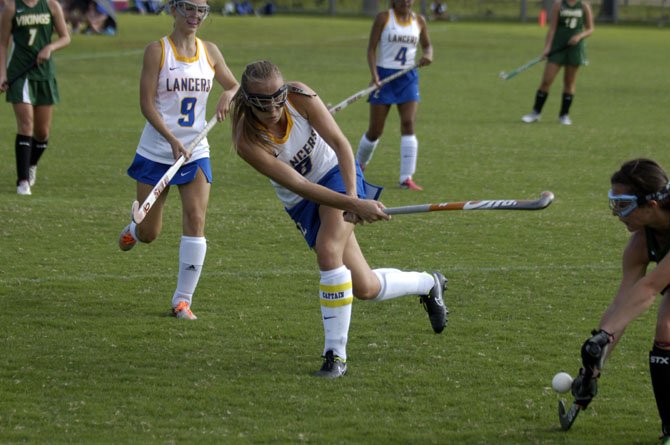 Senior captain Michelle Heinitz scored seven goals for the host Lee field hockey team during the two-day Under the Lights tournament on Monday and Tuesday. Photo by Craig Sterbutzel.

The host Lee field hockey team surpassed its goal-scoring total from all of last season and nearly equaled its win total during the two-day Under the Lights tournament on Monday and Tuesday.

The Lancers finished runner-up in Pool A, winning three of four games while outscoring their opponents 17-2. Lee finished with four victories during the entire 2013 season and scored fewer than 10 goals.

Lee defeated Wakefield and Hylton on Monday, winning each game 6-0. The Lancers beat Woodbridge 5-1 on Tuesday, but lost to Battlefield in what equated to the Pool A championship game, 1-0.

“I think we needed this last game,” Conrad said of the loss to Battlefield. “We needed a tougher-competition game just to show us our weak spots and what we can improve on.”

While Lee ended the tournament with a loss, the Lancers have reason for optimism after scoring 17 goals in their first three games. Conrad said the team has been focusing on becoming more aggressive on offense.

“We’ve really been working on being tenacious in the circle,” she said. “Any time the ball is sitting there, it has to be a goal or corner. We do drills at practice where they’re running if it’s not a goal or corner. If they leave the ball alone for five seconds, there’s some kind of punishment because we really want them to be as tenacious as possible and be hungry around that goal cage.”

Lee (3-1) will host Hayfield at 7:30 p.m. on Wednesday, Sept. 3. Conrad said the Lancers’ goals are to surpass last season’s win total and reach the second round of the playoffs.