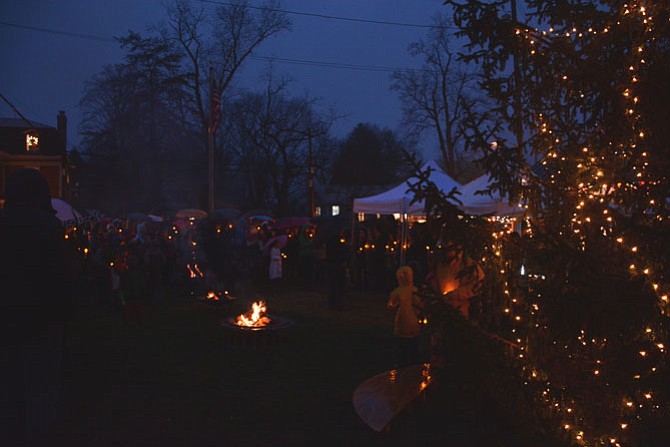 Tom Russell (center, left) of Burke and friend of Payne House owners Pete and Mary Mills welcomes guests to the Mills’ home and gives a brief history of some of its features, like a fireplace from the original Willard Hotel in Washington, D.C.

Clifton Vice Mayor Dwayne Nitz welcomed people to the tree-lighting at 5 p.m. “We’re bringing light to the gloom,” he said, before giving a small team of children the go ahead to flip the switch. The tall, robust fir tree at Ayre Square off Main Street illuminated and an umbrella-toting crowd lit handheld electronic candles with their free hands.

Verses of “The 12 Days of Christmas,” “We Wish You a Merry Christmas” and “Carol of the Bells” pierced the dark mist, voiced by a combined choir from Osbourn Park High School. The Madrigals and Cantus groups were joined by Patriot High School’s women’s choir Mozzefiato for a few verses of “Silent Night.”

THE FIVE PRIVATE HOMES dating back to the late 19th century, two historic churches and Art Guild of Clifton show all were that much more inviting as warm, light shelter from the elements.

Pete and Mary Mills’ “Payne House” (7151 Main Street) was built in 1884 by the lumber merchant and builder Melvin Payne. The original house in Carpenter Gothic style was added to in the 1980s by the Ruck family, making the space more livable for today’s families.

“We love the history, it’s why we bought the house,” said Mary. “It has that really traditional feel in the front but is more modern in the back.” Preparing the house for its third consecutive appearance on the homes tour required “a lot of cleaning and arranging,” including fragrant fresh winter greenery.

Clifton Baptist Church across from the Payne House welcomed guests with homemade cookies, hot cider and performances from the school choirs. The building has changed little since it was constructed in 1877 at Main and Chapel Streets.

“The history is so amazing in this church,” said member and Clifton resident Orene Blum. “When you walk through these doors, it’s like being wrapped up in a quilt.”

Sal and Gina Speziale used to live in Burke before buying 7153 Main Street and moving to Clifton four years ago. “She’s a Cliftonite,” Sal said of Gina, who grew up in the town. “When we heard the previous owners were moving, she wanted to come back and I just followed ‘the boss.’”

Built in 1884, the Speziale’s home once housed the General Mercantile Store, Black Pussycat Café saloon, cabinet shop and meat market, among other uses. Though the current owners have had to replace the roof, renovate the kitchen and have the original hardwood floor taken up and put back exactly in place, board by board, to repair some water damage, the couple has largely kept the house the way it was. “It’s nice to be reminded of the way life used to be,” said Sal.

CLIFTON MAYOR William Holloway spent much of the afternoon at the Art Guild of Clifton show held at 12641 Chapel Road. The artists took advantage of the community gathering to show off their paintings, metal ware and textiles. “It brings a real life and vitality in here,” said Holloway. “It just gets bigger and better year after year. These people in here aren’t competing, they’re lifting up each other.”

And fortunately, they all had a roof over their heads.