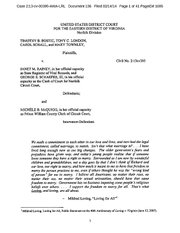 Virginia — In 1967, Virginia was one of 16 states that banned interracial marriage and had criminal penalties for violators.

Mildred Jeter, an African-American woman, and Richard Loving a white man, married in 1958, were convicted and banished from living in Virginia for 25 years to avoid serving a one-year prison sentence. On June 12, 1967, the U.S. Supreme Court, in Loving v. Virginia, overturned the convictions of Mildred and Richard Loving, declaring the ban on interracial marriage unconstitutional.

“Marriage is one of the ‘basic civil rights of man,’ fundamental to our very existence and survival. … To deny this fundamental freedom on so unsupportable a basis as the racial classifications embodied in these statutes, classifications so directly subversive of the principle of equality at the heart of the Fourteenth Amendment, is surely to deprive all the State's citizens of liberty without due process of law. The Fourteenth Amendment requires that the freedom of choice to marry not be restricted by invidious racial discriminations. Under our Constitution, the freedom to marry, or not marry, a person of another race resides with the individual, and cannot be infringed by the State.”

Less than 50 years ago, it was still illegal in Virginia, punishable by prison time, for a white person to marry someone of another race.

Judge Arenda Wright Allen last week on Valentine’s Day, ruled that Virginia’s ban on same-sex marriage is unconstitutional. In the opening of her order, Allen quotes Mildred Loving in a statement she made in 2007 on the 40th anniversary of Loving v. Virginia:

“We made a commitment to each other in our love and lives, and now had the legal commitment, called marriage, to match. Isn't that what marriage is? ... Today's young people realize that if someone loves someone they have a right to marry. Surrounded as I am now by wonderful children and grandchildren, not a day goes by that I don't think of Richard and our love, our right to marry, and how much it meant to me to have that freedom to marry the person precious to me, even if others thought he was the ‘wrong kind of person’ for me to marry. I believe all Americans, no matter their race, no matter their sex, no matter their sexual orientation, should have that same freedom to marry. Government has no business imposing some people's religious beliefs over others. ... I support the freedom to marry for all. That's what Loving, and loving, are all about.”

Judge Allen’s written decision is compelling and well worth reading. You can find a copy of it on the Connection website.

“A spirited and controversial debate is underway regarding who may enjoy the right to marry in the United States of America. America has pursued a journey to make and keep our citizens free. This journey has never been easy, and at times has been painful and poignant. The ultimate exercise of our freedom is choice. Our Declaration of Independence recognizes that ‘all men’ are created equal. Surely this means all of us. While ever-vigilant for the wisdom that can come from the voices of our voting public, our courts have never long tolerated the perpetuation of laws rooted in unlawful prejudice. One of the judiciary's noblest endeavors is to scrutinize laws that emerge from such roots.

“Plaintiffs assert that the restriction on their freedom to choose to marry the person they love infringes on the rights to due process and equal protection guaranteed to them under the Fourteenth Amendment of the United States Constitution. These challenges are well-taken. …

“The Court is compelled to conclude that Virginia's Marriage Laws unconstitutionally deny Virginia's gay and lesbian citizens the fundamental freedom to choose to marry.”