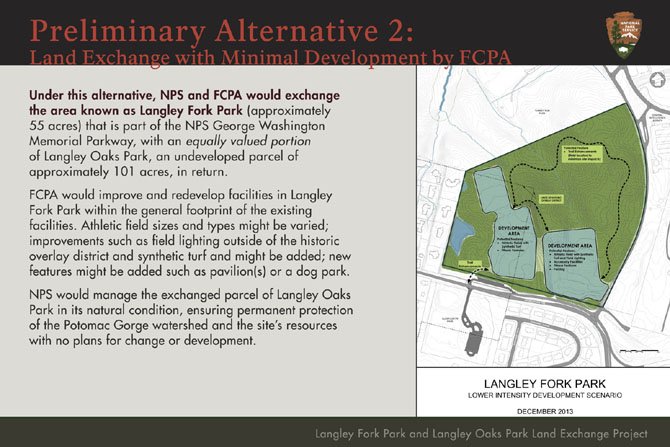 McLean residents may see an upgraded Langley Fork Park within the next year, but some are more excited than others about 55 potential new acres of synthetic turf fields, lights, and the crowds that will come with it.

McLean residents received a first glimpse at three alternatives for a revised Langley Fork Park Master Plan presented by National Park Service (NPS) officials on the evening of Tuesday, Jan. 14. The Park Service sought public comment during an evening meeting at Franklin Sherman Elementary about the exchange with Fairfax County Park Authority (FCPA) of 55 acres at Langley Fork for an equally valued area of 101 acres at neighboring Langley Oaks Park.

The FCPA presented the first draft of its Master Plan in its own public comment session Oct. 17 of last year. The Park Service’s recent evaluation and revision of FCPA’s plan with their own environmental assessment provides for three land usage alternatives.

McLean residents in attendance on Jan. 14 demonstrated mixed feelings about which option they preferred. Alternative 1, in which no land swap takes place and the Park Service maintains control of Langley Fork Park, was the favored option of some community residents who live close to the park and do not want the additional traffic, lights and noise.

“Many of us like our quiet district and do not want two neighbors,” said Roberto Mosse, who lives in the Langley Oaks neighborhood.

While Alternative 1 includes no development or exchange of land, Alternative 2 provides for minimal additions to Langley Fork Park by Fairfax County Park Authority.

Alternative 3 provides for far more extensive development of Langley Fork Park, including options for a dog park and additional parking.

Alternative 2 provides for the full swap of 55 acres for the 101 acres at Langley Oaks, and partial development that includes varying field sizes, lights, and potentially a pavilion and dog park. Alternative 3, the favorite of youth sports advocates and pet owners, is a more expansive version of Alternative 2 that includes installation of new synthetic turf fields on the right side of the park, a dog park, additional pavilions, and expanded parking.

NPS OFFICIALS ALSO explained the outcome of the swap on Langley Oaks Park, which backs up to the George Washington Memorial Parkway, also owned by the National Park Service. In accordance with the National Environmental Protection Act, the Park Service must conduct an environmental assessment. “The National Park Service has no plans to further develop the land at Langley Oaks Park if the swap takes place other than adding NPS signage for trails, according to Thomas Sheffer, NPS Park Planner at George Washington Memorial Parkway. “The intention is to preserve the Potomac Gorge resource area in its natural form.”

The Park Services Office of Value Appraisal determined that the area of 101 acres at Langley Oaks Park was of an equal value for the exchange, according to Project Coordinator Brian Williams.

In its environmental assessment, NPS has conducted two years of research, factoring in forest cover, invasive species, and proximity of nearby agencies, namely the CIA, into their assessment. The Park Service has also worked with the Virginia Department of Historic Resources to fulfill requirements of the National Historic Preservation Act of 1966, which mandates that the NPS evaluates potential effects on nearby historical properties in McLean before a swap takes place.

The NPS is still in the public scoping stage of its environmental assessment and will be accepting public comments until Feb. 3. Written comments can be submitted online at http://parkplanning.nps.gov/GWMP; by mail to Superintendent, George Washington Memorial Parkway, Attn: Langley Fork Park Project, c/o Turkey Run Park, McLean, VA 22101; or by fax to 703-289-2598, Attn: Langley Fork Park Project.