Board Cites Lack of Funds for School Renovations
Votes

Board Cites Lack of Funds for School Renovations 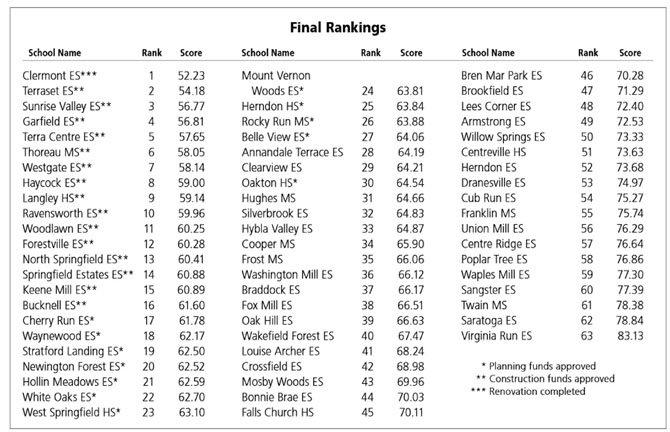 While the 2015 to 2019 Capital Improvement Program (CIP) passed at the Fairfax County Public School Board meeting on Thursday, Jan. 3, many board members expressed concerns with the program.

“Our funding is inadequate and has been inadequate for many years,” said Mount Vernon district school board member Dan Storck about the school’s capital improvement budget — which has an annual cap of $155 million by the Fairfax County Board of Supervisors. “This program takes us to the next step, but we still have a long way to go.”

Fairfax County public schools are bursting at the seams. An influx of 20,000 school-aged children enrolled in the system within the last eight years and there is no end in sight to the growth rate. With many buildings reaching 50-plus years old and enrollment projected at 184,500 for next school year, overcrowded schools are becoming a mainstay.

The CIP five-year plan includes a queue of which schools have planning funds and construction funds approved, and includes the construction of two new elementary schools as well as one new high school. The total bill for this CIP is $697.7 million, with $371.7 million of that unfunded.

One of the major sticking points among board members was the treatment of legacy high schools: Falls Church, Herndon, Langley, Oakton and West Springfield. All these schools were built in the 1960s, and none have received a full renovation. Some are still not in the queue to receive funds for upgrades as of this CIP.

“We’re stuck between a rock and a hard place,” said Providence District Representative Patty Reed citing not enough funding and too many schools in need. “And Falls Church is no further along than it was before.”

The CIP did not list Falls Church in the queue for high schools needing renovation — which many members felt was a gross oversight since the school was built in 1967 and is without science and computer labs — putting its students at a severe disadvantage to remain competitive for jobs and acceptance into top colleges, said Reed.

At the meeting last week, an amendment to the CIP passed to further examine renovations needed at legacy high schools.

While the CIP focuses on renovating/enhancing existing schools and building new schools, the Facilities Planning Advisory Committee — and some members at the board meeting — suggested examining the entire process for which the board determines the renovation priorities.

The facilities planning committee suggested in a January report that an overarching study on school boundaries and changing those boundaries by 2018 could help alleviate much of the overcrowding in schools across the county — especially high schools. With the current CIP, Facilities Planning Advisory Committee wrote that in just five years 45,397 children will be attending schools at more than 115 percent of capacity — approximately one in four students. Currently, there are no ongoing or planned boundary studies in place, said John Torre, public information officer with FCPS.

Another measure At-Large Member Ted Velkoff suggested to ensure schools were receiving a more adequate amount of capital improvement funds was to integrate the county government and the school’s capital funding plans and have criteria set by both boards for which facilities would enter the list.

“I have grave concerns,” said Mason District Representative Sandy Evans about the CIP. “It’s not just about needing a new funding stream, but how we approach it.”