Music and Community at Café Montmartre

Lake Anne restaurant continues to be a local entertainment venue. 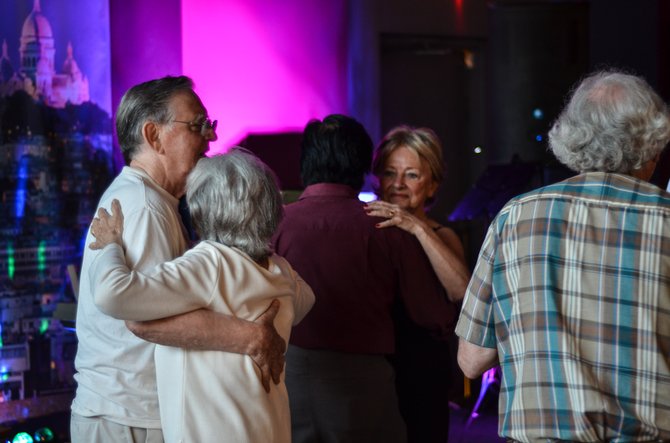 The evening of Friday, June 27, residents of Reston and other guests were at Café Montmartre for the restaurant’s monthly music event. Playing the keyboard was local musician Tom Saputo. Saputo brings live music at least once monthly to Cafe Montmartre at Lake Anne usually on a Friday night. “The people here are really nice and the food and service here is great,” said Saputo.

“We are the oldest restaurant in Lake Anne,” said restaurant co-owner Kevin Le. “We have good local support. I believe the restaurant is a community restaurant.” The Le family opened their restaurant at Lake Anne Plaza in 1997, and since then it has become a legacy restaurant. 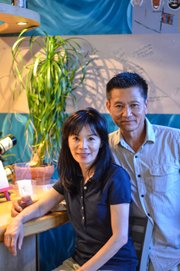 Kevin Le and his wife Anh Le, owners of Café Montmartre at Lake Anne in Reston. Their restaurant has served patrons since 1997.

We have been doing shows here for the past 5 years,” said Jerry Katz, a resident of Reston. “In addition to singing, we have had a cabaret show and sing-alongs… The food is great, and on evenings like these we can enjoy an old fashioned nightclub atmosphere. In the old days you would go to the Latin Quarter of New York City.” Enjoying the cuisine that night was Jim Elder, a resident of Reston for more than 30 years. “We love the food here and the atmosphere is great,” said Elder.

Many patrons who attend the evening music events are in their late forties or above. Some patrons include former customers of the now closed Serbian Crown restaurant, who pursued the music and dance events at Café Montmartre. “I think the music they do here is fantastic,” said Reston resident John Moffat. Also dinning at the restaurant was Ken Knueven, president of the Reston Association Board of Directors. “They are really doing their best to welcome in other people,” said Knueven. “This place has longevity.”

The tight economy has made Americans more frugal. Purchases, which account for about 70 percent of the economy, climbed 0.2 percent in May after being little changed in April, according to report by the Commerce Department. At the end of March, the Burger King at North Point Village Center was closed. In April of this year, the Jasmine Café, which had been located at Lake Anne for more than 20 years closed. Yet Kevin and his wife Anh Le have continued to offer service at their family owned restaurant. The couple decided against opening a sports bar as they wanted to keep the restaurant family friendly.

The Le family has been very supportive of local music, and has sponsored the bi-monthly meetings of the Northern Virginia Ukulele Society. The restaurant will be one of the sponsors of the popular Lake Anne Ukulele Festival, set for Saturday, July 12. The festival is the only ukulele festival in Northern Virginia, which has brought thousands of people to Lake Anne from across the region for this event. The restaurant also hosts a music showcase every third Thursday of the month with students of Potomac Falls Music.

The restaurant boasts an extensive martini menu as well as a delicious Vietnamese menu Wednesday through Friday, in a nod towards the owner’s heritage. Café Montmartre is open for lunch and dinner service throughout the week, with brunch on Saturday and Sunday. “We have a lot of good memories,” said Kevin Le. “To me its is like extended family.” For more information about the restaurant, visit www.cafemontmartre.com.