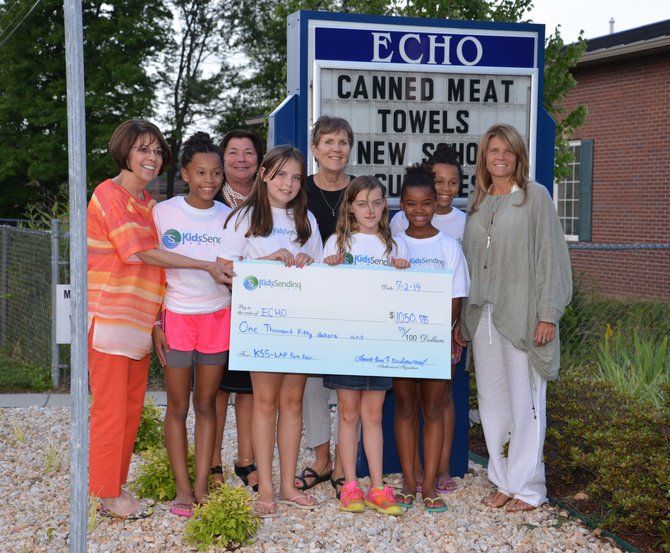 They’re at it again. Who’s at what? Those girls from Kids Sending Smiles (KSS) – that’s “who.” The “what” is yet another charitable mission completed by this band of energetic and socially conscious Springfield/Lorton area elementary students, who several years ago formed their own 501(c)(3) nonprofit organization with the goal of “bringing happiness to ourselves and others by helping those in need in the United States and around the world.”

Their first undertaking was a fundraiser and goods collection for a transitional facility in the Philippines for girls moving out of homelessness. Since then they have raised funds toward the purchase of a seizure dog for a local toddler and for victims of Hurricane Sandy, made and sold jewelry to support an orphanage in Liberia, and even organized a 5k Run/Walk for Breast Cancer, to name just a few of their charitable activities.

The girls usually bring ideas for projects and vote on which ones to tackle next at their official meetings. This time, the project came to them. “Several of the girls attended the same pre-school, The Little Acorn Patch (TLAP) in Springfield. It’s where some of them first met,” said Laurie Underwood, mother of Samantha Underwood, a founding member of KSS. “The folks there saw the previous Connection newspaper article on Kids Sending Smiles and thought it would be great to team up with their former students to help a local organization that TLAP has supported for years.” The KSS members heard the story of Ecumenical Community Helping Others (ECHO) and agreed that ECHO’s efforts were a perfect match for their goals and their skills. This time they chose a Fun Fair to raise awareness and funds, using the play area of The Little Acorn Patch as their venue.

“Our first date got cancelled because of storms,” said Tatiana Joseph, an original KSS member. Their second try, on May 31st, went off without a hitch. With games, face painting and baked goods on sale, Kids Sending Smiles pulled in over $1,000 to further ECHO’s good works in the community.

On the evening of July 2 a delegation from KSS, along with some of their very involved parents, presented their collection to ECHO in person, and were given a guided tour of the ECHO offices, warehouse and food pantry by Executive Director Meg Brantley, and Clothing and Christmas Shop Co-Chair Kathy Marchetti. Also on hand for the presentation and the tour were Andrea Siciliano, Owner/Director of The Little Acorn Patch, and the school’s Administrative Director, Carmella Alves.

The visitors all got quite an education as they were shown about the impressively clean, organized and inventoried facility. As Brantley and Marchetti explained, ECHO has been serving the community since 1968. “And we have some volunteers who have been working here for that entire time,” said Brantley.

ECHO is dedicated to assisting those suffering from both long-term poverty, as well as those experiencing emergency needs. With their all-volunteer staff and leadership, the group provides clothing, food, household items, school supplies, financial assistance, counseling support and referrals to those in need. Founded by nine local churches in the Springfield area, ECHO has grown to include 27 congregations. Their combined outreach now includes ESL programs, tutoring and mentoring at area schools, and special projects like the school Backpack program. On the night of the KSS visit, volunteering teens from area high schools were busy stuffing backpacks with essentials…”and whenever possible, a book. We’re big on books and encouraging reading around here,” noted Executive Director Brantley. ECHO is preparing some 1200 backpacks for distribution to students of parents struggling to provide these basics.

The KSS and the Little Acorn group were also shown Echo’s donation intake and sorting procedures, the storage areas and the “shopping” areas of goods and food items, including meats, milk, and eggs. Brantley praised the community. “They are truly very generous,” she said. “We even get certificates for fresh produce from the International Market,” she added. “And help from amazing people like you girls from Kids Sending Smiles and our friends from The Little Acorn Patch.”

To keep track of future Kids Sending Smiles activities, check out their website at www.kidsseningsmiles.org. Their Facebook page will also provide a look at what they get up to on their mission to help – and the fun they have doing it. ECHO is located at 7205 Old Keene Mille Road in Springfield and can be reached on 703-455-2763 or through their website at www.echo-inc.org.