Kids Sending Smiles Around the World 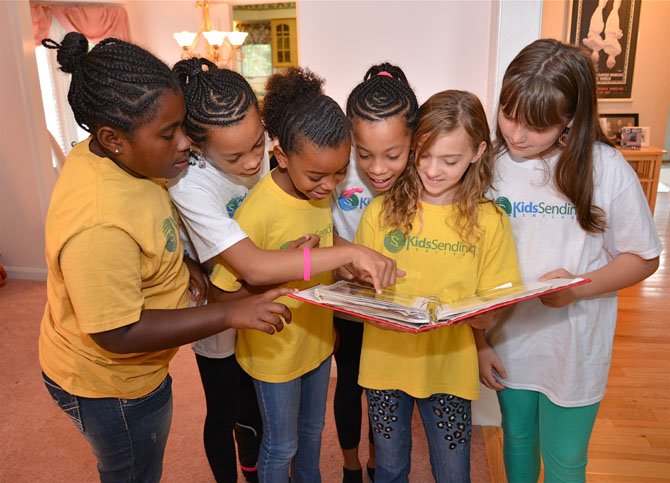 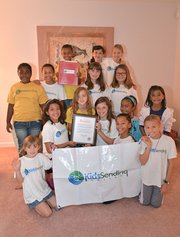 Many of the members of non-profit Kids Sending Smiles, founded and run by local elementary school girls, show off their banner, their Fairfax County Board of Supervisors Proclamation and the scrapbook of the 17 charitable events they have already organized in their two year existence.

The Court of the 2013 Lee District Lady Fairfax was in session, but there were no royal activities underway. Instead, 11-year-old Samantha Underwood and her friends were busy reminiscing about past events and planning future ones for Kids Sending Smiles (KSS)—the charitable organization they established when a friend of Philippine ancestry told Samantha about the conditions and the poverty, especially among young girls, in the native country of her family. “We thought about just sending money,” said “Queen” Samantha, “but that didn’t seem to mean the same as really getting involved and doing something to help.” So Samantha and a few of her elementary school friends got together, raised funds and collected donations and sent them off to a transitional facility for girls moving from homelessness. Doing this charitable work felt so good, that Miss Underwood and company decided to take their efforts even further. With the help of their parents—in particular Mrs. Laurie Underwood—Kids Sending Smiles (KSS) was founded as a 501 (c) (3) non-profit. “To bring happiness to ourselves and others by helping those in need in the United States and around the world” is their official mission, and a goal that they have obviously taken to heart in the two years since they first formed.

Starting with a core group of about seven young ladies, KSS has grown to about 20 members. There are official meetings—“You have to keep real records and stuff,” said Samantha Wenger, one of the “originals.” Any member can bring a potential project to the table. “Then we do a blind vote,” explained Katie Machado.

“You close your eyes and raise your hand when the project you want to vote for is called. One of the adults keeps track. But whatever we pick, we all work together to make it happen.”

The youngest member of the group at 6 years old, home-schooled Molly’s favorite event so far was Christmas caroling at the local pool. Katie Machado, who attends Springfield Estates Elementary, and Samantha Wenger, who goes to Island Creek, recall the efforts to raise money for a seizure dog for a local toddler as high on their lists. The girls held a raffle and a silent auction in April at their local Genghis Grill, even acting as servers to aid in community efforts toward raising the $22,000 needed to raise and train the specialized pooches.

Before the members of Kids Sending Smiles (KSS) get down to the business at hand—last minute preparations for Saturday’s 5k Run/Walk for Breast Cancer – there has to be a few minutes of catch-up and maybe a giggle or two. After all, these KSS’ers don’t all go to the same school.

The KSS collective have already pulled off 17 charitable projects in their short history. In addition to the seizure dog projects, they have raised funds for Hurricane Sandy victims, organized a winter clothing drive for those in need, made and sold jewelry and other products in aid of the Love a Child Orphanage in Monrovia, Liberia and raised relief effort funds for tornado victims in Oklahoma. No wonder the Fairfax County Board of Supervisors honored them with a special proclamation earlier this year. Their 18th event is their most ambitious yet. On Saturday, Oct. 19, they are holding a 5K Run/Walk for Breast Cancer at Burke Lake Park. With the help of sponsors like Metro Run and Walk, a store dedicated to runners and walkers in Springfield, the girls say they are ready. “There’s a lot to do,” admitted Ms. Underwood, “but we’ve been working on this since April. We got together to make the bags for the runners this week and lots of people have helped to organize it and teach us all the things we need to know to do this. “

THE EFFORTS of this group of community-spirited youngsters can be further explored on their website at www.kidssendingsmiles.org and on their Facebook page. The children all hope to see your smiling face at Burke Lake Park on Saturday, and at any of the future charitable events they are even now managing to plan—in between school work,