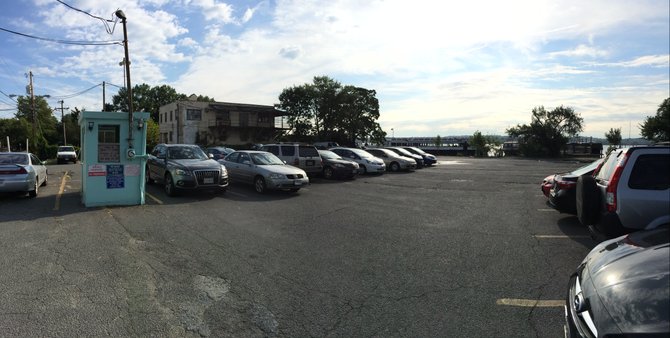 The city already owns the old Beachcomber Restaurant and one third of this parking lot, which were purchased by the city using open space funds in 2006. Now the City Council is about to consider an ordinance that would finalize the sale of the rest of the parking lot, which will cost about $5 million. Photo by Michael Lee Pope.

City officials are on the verge of finalizing the sale of two slices of waterfront property, a $5 million purchase years in the making that will help seal a deal with the Old Dominion Boat Club and open up a key part of the waterfront to the public. The properties complete a set city officials began to compile back in 2006, when the city purchased the old Beachcomber Restaurant and one-third of the parking lot next to it for $3 million.

"These are important parcels," said Deputy City Manager Mark Jinks. "They are a missing link that will help us get one step closer to a multi-decade goal of having continuous public access along the water."

The purchase is taking place just as members of the Old Dominion Boat Club are expected to vote this weekend on finalizing a land swap, a separate deal that's been years in the making. City officials will get the boat club's property at the foot of King Street, which they want to transform into a public plaza known as Fitzgerald Square. Boat Club members will get $5 million from the city and a new home at the foot of Prince Street in addition to a boat launch.

"This allows us to meet the purpose of the waterfront plan," said Alexandria Mayor Bill Euille. "This will open up the entire waterfront to accessibility and connectivity."

THE HISTORY of the Beachcomber and the parking lot goes back to the 1940s, a time when the property was underwater. A 1941 Sanborn Fire Insurance map shows a jagged shoreline where the Beachcomber Restaurant building and parking lot would later be located with an automatic laundry and wood-storage facility across the street. A group of investors believed they could transform the property from an industrial backwater to a scenic spot on the river. In 1945, Thomas Hulfish, Edward Wayne and John Bethea leased the property from the owners of Robinson Terminal and constructed the Beachcomber Restaurant over the water.

"There was no other land available," said Tom Hulfish, whose father was one of the restaurant's owners. "And they wanted to open a seafood restaurant."

Several years later, the land under the Beachcomber and the land creating the parking lot next to it were created by using leftover materials from Robinson Concrete. John Richards, who was the clerk of Robinson Concrete, transformed the Beachcomber into a retail firearms shop. The newly created land to the south of the restaurant was part of Aitcheson Fuel Company. When the fuel company eased operations, Richards formed a partnership with former Alexandria Mayor Frank Mann and businessman Robert Sweeney, who ran a Hickory Farms franchise at the corner of Pitt and Cameron streets. The trio purchased the property for $100,000, quite an investment considering its value today.

"You have to remember that this was an industrial area back then," said Hulfish.

THE WATERFRONT PLAN calls for the parking lot the city is now purchasing to become part of an expanded Point Lumley Park. The theme for the block is "the working seaport," and leaders of the Seaport Foundation are trying to gain access to a civic building that the city plans to construct here as part of the park. A pedestrian promenade will extend along the water's edge, and the new park could be a location for historical markers, monuments or public art.

"Waterside activities should include opportunities to get into the water, such as kayak, canoe, rowboat or small sailboat rental," according to the waterfront plan. "Raised hardscaped areas, positioned to mimic the historic piers, could be constructed and designed to not only provide historic interpretation but as part of the functional floodwall in this area."