How Has the Library Affected You?
Votes

How Has the Library Affected You? 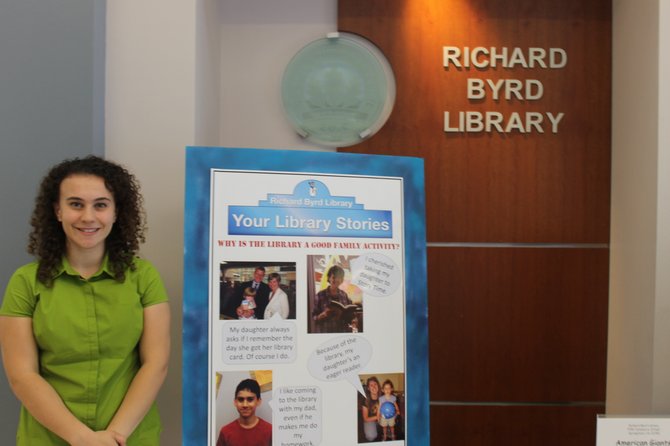 Springfield resident Eleanor Lamb, a graduate of West Springfield High School, has been spending her time as an Exon-Mobil Intern with the Friends of the Richard Byrd Library collecting personal stories for the group’s “Library Stories” project. Photo by Janelle Germanos.

Springfield resident Eleanor Lamb loves the library. The West Springfield High School graduate visited consistently while growing up in the area, and is now giving back through her internship with the Friends of Richard Byrd Library.

Lamb, a rising junior at William and Mary, has spent the summer gathering the opinions and viewpoints of people who used the library, taking their picture and making posters with the responses as part of the “Library Stories” project.

Chris Peterson, president of Friends of Richard Byrd Library, said the group wanted to conduct a project that allowed for people in the community to share why the library is so important in their lives.

“People have a lot of different feelings about the library,” Peterson said. “It plays a different role for everyone.”

THE GOALS of the project are to show library lovers that there are other people out there that share the same passion for the library, and to demonstrate the resources available at libraries that people may not know about.

Lamb asks visitors questions varying from “What’s your favorite thing about the library?” to “How has the library improved you as a person?”

She then puts stories like those of Maya Flores, a volunteer who used the library as a child to help her parents learn to speak English, onto posters and onto the Friends of Richard Byrd Facebook page.

“The answers really vary. Some of the kids give really cute answers,” Lamb said.

Eleven-year-old David Beatty, for example, got his picture taken after a heavy summer rainstorm. Despite the rain, Beatty came out to check out the library’s book sale.

“I like the library,” Beatty said. “Generally they have my favorite books I wouldn’t expect to see there. I didn’t want the books to be gone before I got there.”

The story of Maya Flores and the role of the library in helping people learn English and become citizens was a common theme throughout the project, Lamb said.

Flores, originally from Los Angeles, shared with Lamb that she began visiting the library with her parents when she was 5. Her parents were from Mexico and didn’t speak English. They would visit the library when they needed an explanation, and used the reference books to research American holidays.

“All their friends were Mexican, so they had no one to ask,” Flores said. “It was a matter of both of us learning at the same time.”

There’s also stories like that of Aisha Deen, who takes her daughter Simrah to the library.

“It’s fun. The staff is very friendly and cooperative. My daughter is shy, but here she asks for help on her own. I love this library,” Deen said.

THE “LIBRARY STORIES” project has gained some attention around Fairfax County. Some individuals interviewed for the project will be part of a Fairfax County Channel 16 Service Announcement, to be filmed soon.

“I’m excited that there’s a chance more people will see the project and learn about the ways the library is important,” Lamb said.

The Friends of Richard Byrd are also planning to host an event on Aug. 18 that showcases the posters that have been made containing the responses from the project.

“It’s surprising how many people have never been to a library, or haven’t gone in a very long time. We’re hoping this will help change that,” Peterson said.